Kevin Laroy has gained a reputation for his stylized portraits through his appearances on Ink Master and Black Ink Crew. Kevin Laroy
Kevin Laroy had a constant case of what he calls "swamp hands" while competing on the most recent season of Spike TV’s Ink Master. Sweating palms may seem like a major setback during a televised tattoo competition, but Laroy managed to beat out more than two dozens artists on the show and eventually catch the attention of VH1 producers.

“It was the biggest season to date and started off with 30 contestants, including world famous artists such as Kelly Doty and Nate Beavers,” Laroy says. “Not only am I competing against these people but every move I make, right or wrong, is being carefully documented for the world to see, then judged by some of the biggest personalities in our industry.” 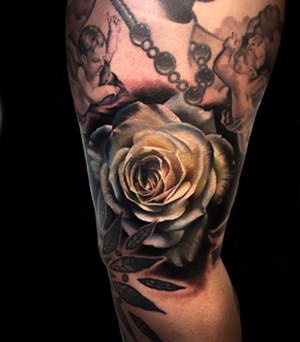 “I recently stepped out of my stylized box and attempted an actual photo-realistic white rose that I was super proud of,” Laroy says.
courtesy Kevin Laroy
Laroy moved to Dallas with his family when he was 15 years old. “My entire life we moved around a lot, but Dallas is where we spent the most time and where I've become most comfortable,” he says. “I learned how to drive in Dallas. I graduated high school in Dallas, and the start of my career began in Dallas.”

That career began in 2006 after an apprenticeship under friend and local tattoo artist Mani Ramos. “I was so apprehensive at first, but even after my mom's disapproval, I was there the next day with pen and paper in hand, ready to take notes,” Laroy says. “It's been a crazy ride ever since.”

While filming Ink Master, which Laroy describes as one of the most intense and memorable experiences of his life, VH1’s Black Ink Crew producers reached out to him with another opportunity. He was introduced at the end of the reality show’s fifth season.

After all he has done and accomplished, Laroy is still obsessed with the Dallas tattoo scene. “Aside from housing some of the best artists in the country like Francisco Sanchez, Zack Singer and Rember Orellana, [Dallas] just seems like a big extended family,” he says. “Even though we all work at different shops, everyone knows each other and I've learned so much from some of the most talented artists in the industry residing locally in the ‘Triple D.’”

If you’ve seen him onscreen or are one of his 68,000 Instagram followers, then you know Laroy is best known for his portraiture. He has tattooed what he calls “pop-culture pieces” of Will Smith, Biggie, Tupac, Pharrell and Michael Jackson, to name a few.

“I like to think that I have a photo-realistic style with a stylized approach,” Laroy says. “Typically, portrait work is one style or the other but I try my best to mesh both. It's similar to that of an ordinary photograph being run through Photoshop and made into a sticker. I like soft blends and the occasional clean, bold outline.”

While he’s known for his lifelike portraits, Laroy especially loves tattooing roses. “I recently stepped out of my stylized box and attempted an actual photo-realistic white rose that I was super proud of,” he says. “Weirdly using very little white ink.”

Laroy is preparing for Season 6 of Black Ink Crew, filmed in Harlem. Follow him on Instagram @Kevin.Laroy for more information on how to book an appointment.