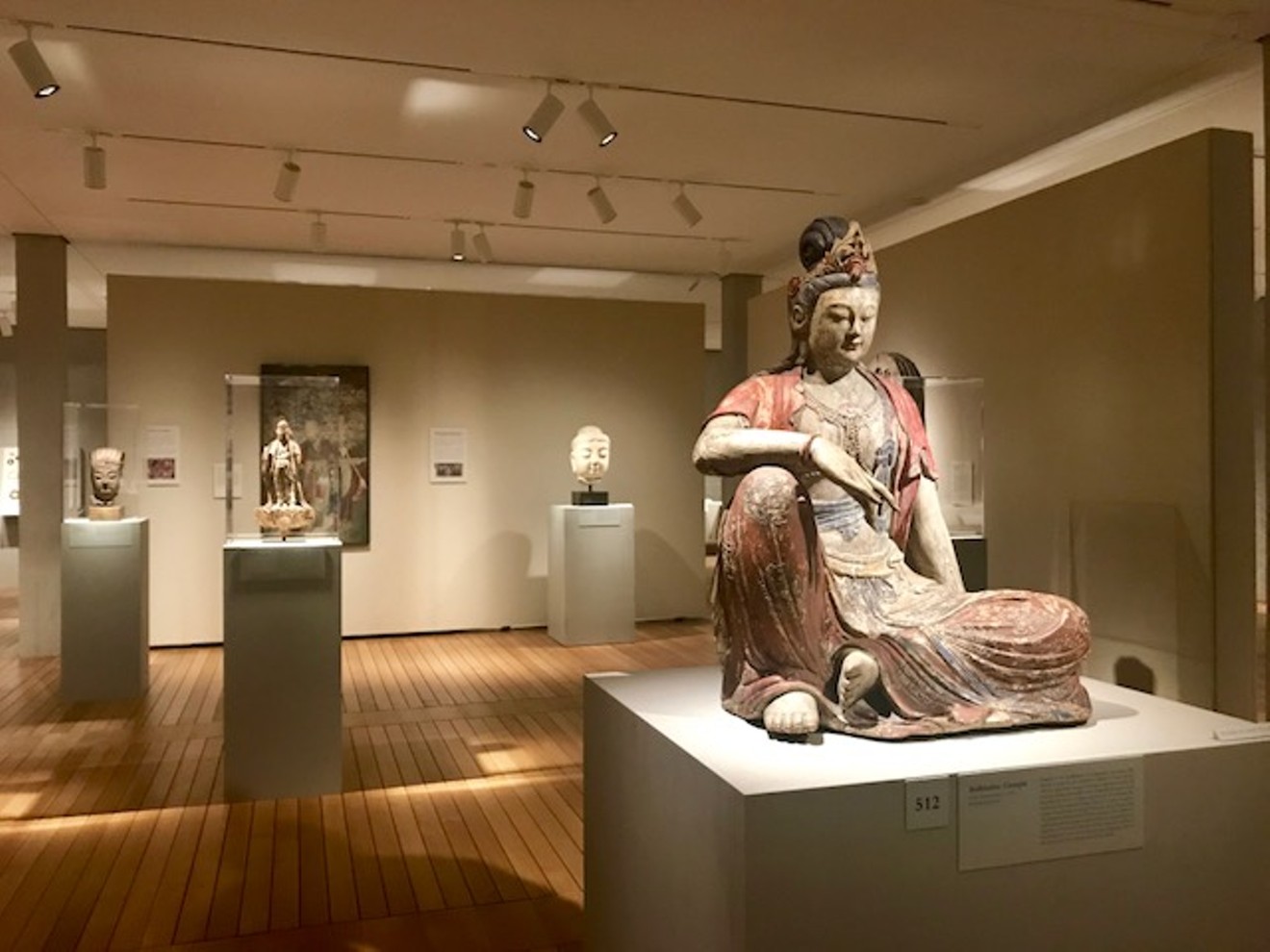 From the Lands of Asia runs through Aug. 19 at the Kimbell Art Museum. Karen Gavis
Four tiny heads sculpted about 500 years B.C. were just the start of Sam and Myrna Myers’ Asian art collection.

The American couple, who moved to Paris in the 1960s, acquired more than 5,000 pieces, about 450 of which are on display in From the Lands of Asia, which runs through Aug. 19 at the Kimbell Art Museum in Fort Worth.

“They were really excited they could own a piece of real history,” Jennifer Price, Kimbell’s curator for Asian and non-Western art, said of the couple’s first buy from an antique store in Switzerland.

Although they were of limited means at the time, the Myers returned to the shop each summer, Price says, and later made $50-a-week payments on an Egyptian head.

“Sam never would tell me the actual cost,” she said. “Only that it took him a very long time to pay it off. Over time, they were drawn to Asian art.”

Price, who met the couple in the 1990s, described their private collection as sort of a journey of discovery that spanned 50 years. The Myers were fascinated and curious about the things they saw, she says. And before making an acquisition, they both had to like a piece and be willing to live with it. Textiles, blue and white porcelain from the Ming dynasty, Buddhist art and jade make up the four major themes of the From the Lands of Asia exhibit which is making its U.S. debut at the Kimbell.

“These objects create a rich, complex and magical tapestry — a panoramic history of Asian cultures from ancient times to modern days,” Kimbell director Eric Lee said in a press release.

“Costumes and Customs” presents a colorful view of the culture through textiles.

“Not unlike today, what you wear kind of reflects who you are, your status, your wealth and your taste,” Price said. “That’s always been the case in Asia.”

Pointing out dragons and the imperial color blue, Price said animals sometimes denoted rank. Along with luxurious Japanese kimonos, kabuki and Noh theater attire and an 18th century Chinese suit of armor can be seen.

“Like textiles, porcelain was also symbols of trade, commerce and diplomacy,” Price said upon entering the “Ocean of Porcelain” part of the exhibit.

Ming porcelain (1368-1644) was transported by boat and ship. Because there were shipwrecks, much of it was harvested from sunken treasure, Price said, noting the calligraphy brush pot depicting two scholars within its cobalt-colored landscape.

As Price made her way toward the “One Thousand Years of Buddhism” portion, she passed through what she called a “cabinet of curiosities” featuring items from around the globe, such as carved ivories and crystals.

Buddhism, she said, originated around the 5th century B.C. and traveled over the Silk Road through Central Asia, China, Korea and Japan.

“Quite a few of [the artifacts] are monumental,” she said of the section’s pieces.

Then Price transitioned to the “Magic of Jade” portion of the exhibit.

“For the Chinese, jade is the most precious material, more precious than gold or silver,” she said. “A lot of people think jade is just green, but in fact it is not.”

Blue, green, brown, and yellow jade are seen among the items.

“We don’t exactly know what the discs were used for but obviously some ritual context,” she said.

The same was true for a display of cylindrical objects that Price says may have been used portals for communicating with spirits.

Even the tiniest pieces of jade, which is believed to have protective properties, would be carved into birds, fish, bears or human beings, Price said. None was wasted.

“To wear jade indicated, again, your social status, your wealth and implied that you were someone of good moral character,” she said.

Near the end of the exhibit is a case of contemporary-looking jewelry made from ancient stones, including one from 200 B.C. that Sam Myers found in shoebox of jades he bought from an antique dealer.

“This is one that Myrna wore throughout her life,” Price said.

Price, who has worked at the Kimbell for 25 years, said while some visitors are drawn to specific sections of the exhibit, From the Lands of Asia has something for everyone.