Sting Has Been Living in Waxahachie for the Last Eight Years 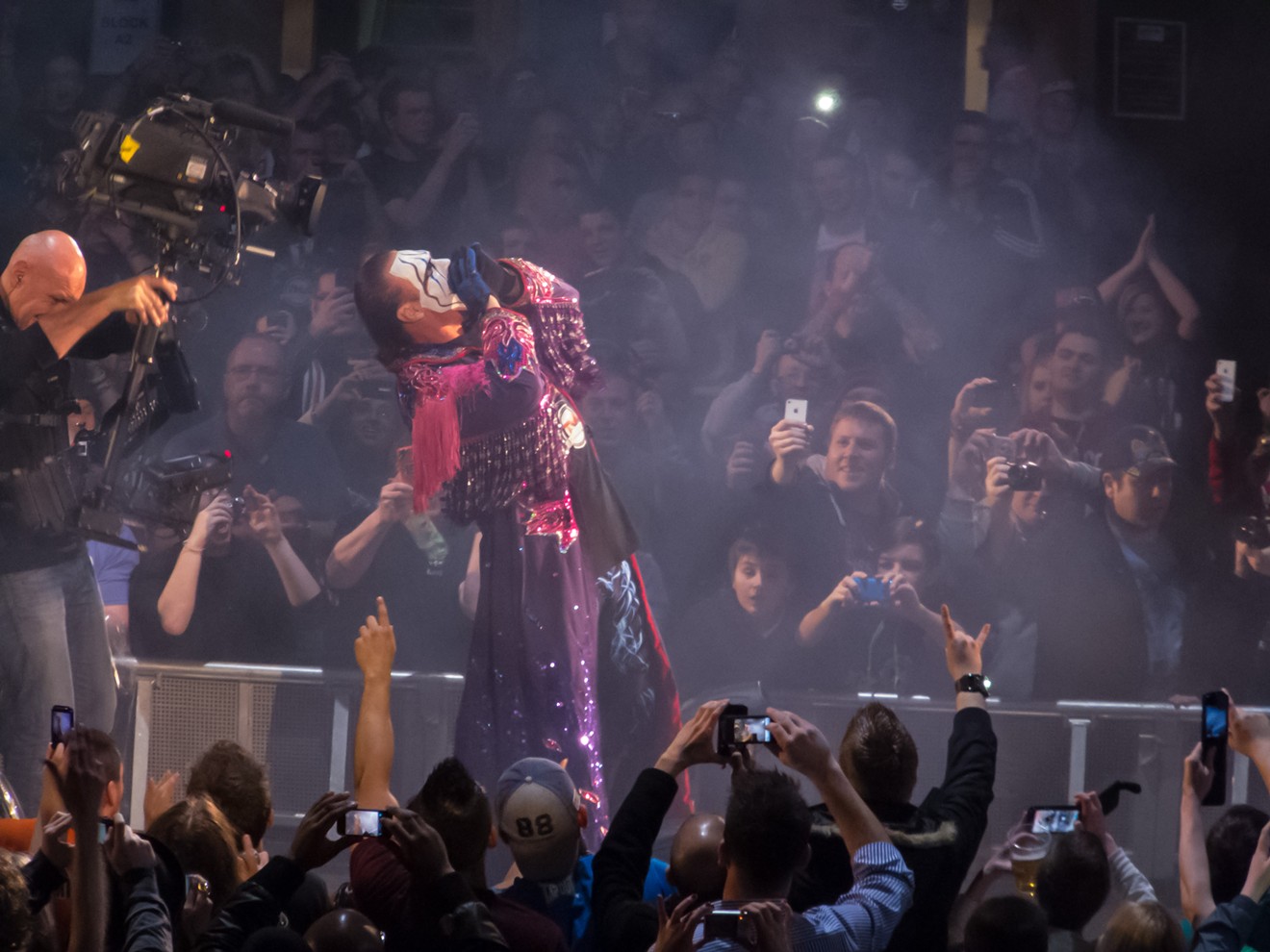 Steve Borden was the face of World Championship Wrestling in the mid-'90s. Wikimedia Commons
Steve Borden doesn't fit the mold of the typical Waxachie resident, unless when you think of Waxahachie, you think of a pro-wrestler who frequently travels to Dubai and Qatar for appearances.

Borden, better known by the name of his wrestling alter ego, "Sting," was the face of World Championship Wrestling in the mid-'90s. He grew up in Southern California, but relocated to Texas after a divorce eight years ago.

This weekend he'll make his first appearance as Sting at Texas Frightmare Weekend, a convention that primarily caters to horror fans but has also introduced wrestlers into its lineup over the last few years.

Borden — who will be joined by his longtime rival, Ric Flair — has done comic cons before, so he has a pretty good idea of what to expect.

“Fans at these conventions seem to be so appreciative and respectful and courteous,” he tells the Observer over the phone from his property in Waxahachie on a windy Tuesday morning. “I love interacting with them. I’m looking forward to this.”

The convention will take place at the Hyatt Regency at DFW Airport, just an hour from Borden's new home base. He spent time here, as well as Tennessee, Louisiana and Georgia, while building his career in professional wrestling in the mid-'80s.

Borden is fairly tight-lipped about what prompted him to lay down roots in North Texas permanently.

“Unfortunately, divorce is a part of the story, and I ended up here with my family," he says. "It’s a lot easier, travel-wise. In Dallas, you’re right in the middle of everything.”

The first house he bought in Texas was in Valley Ranch, near the Dallas Cowboys' training facility. He remembers the legendary Sportatorium, where the Von Erich family wrestled in the late '80s and early '90s. Borden never wrestled there himself, although he says he did wrestle at the Reunion Arena a few times.

He returned to Southern California for a short time in the mid-'90s, before deciding to make a permanent move to Waxahachie.

Even though he retired from wrestling in April of last year, he continues to make a living off of the Sting character. He makes most of his appearances in street clothes and sunglasses, but occasionally he'll don the black and white “Crow Sting” paint that was his trademark during the second half of his career.

Borden draws a comparison to Robert Englund, who rarely makes appearances in the Freddy Krueger make-up.

As far as the “Surfer Sting" look, for which Borden died his hair bleach blond, he says he doesn't receive much flak for leaving that one behind.

“I think nobody is expecting early '90s Sting at this point,” Borden says. “I think everybody wants the Crow Sting anyway. That’s the one most fans will remember. It was more of a worldwide deal at that point. Surfer Sting was a worldwide thing, but it wasn’t as globally strong. I don’t have enough hair on my head to grow a flat top anymore.”

“Sometimes I can’t go anywhere,” he says. “I don’t know what causes it, how or why – if it’s my demeanor or what I’m doing – but I always have my baseball cap and sunglasses on. Sometimes I go under the radar. Other times, every single person wants an autograph or picture.”

He laughs when asked what retirement has been like for him.

“The word retirement is like, ‘What does that mean?’” Borden says. “For me, it means I’m not a human super ball anymore. I’m still very active and busy. Last year and this year, I’m picking and choosing, but I’m still out there doing appearances. I just got back from the Middle East, Qatar and Dubai. I’m going to the U.K. in September. I’m still doing stuff with the WWE.”

“Some people can get in the chair and kick back in the sand and look at the water all day long,” Borden says. “I can’t do it. I gotta be living and staying busy.”

Sting at Texas Frightmare Weekend, Saturday, May 6, at the Hyatt Regency at DFW Airport, 2334 N. International Parkway. Tickets are $30 to $83.95 at texasfrightmareweekend.com.