An eSports Giant Is Moving to Town. Here are 5 Reasons Why You Should Care. Members of the OpTic Gaming team hoist their championship trophy after the team's big win at the 2017 Call of Duty World League in Orlando, Florida. courtesy Major League Gaming, Facebook
OpTic Gaming, a hugely successful Call of Duty eSports team that's based in Chicago, announced on its website that the team plans to move its headquarters to Dallas sometime this year. The news of the team's move comes on the heels of OpTic Gaming's big win Saturday at Major League Gaming's Call of Duty World League tournament in Orlando, Florida.

"[Dallas is] already a tremendous market for traditional sports. So it made sense to be there." – OpTic Gaming CEO and owner Hector Rodriguez

Hector "H3CZ" Rodriguez, the CEO and owner of OpTic Gaming, recently said on the team's podcast that OpTic Gaming had been looking to relocate for almost a year before choosing Dallas.

The team has been in talks with the city and the Dallas Chamber of Commerce, and both are interested in what a major eSports team could bring to Dallas.

"It's already a tremendous market for traditional sports," Rodriguez said on the team's podcast, "so it made sense to be there."

The uninitiated may be wondering: What the heck are eSports? We endeavor to explain what they are and why you should care.

1. eSports have a massive, global audience.
Competitive gaming has one of the largest fan bases of any sport, virtual or otherwise. According to the marketing research group Newzoo, eSports have a global audience of 191 million fans. Fans watch their favorite teams and tournaments on internet platforms such as YouTube and Twitch and on cable networks such as TBS, NBC Sports, Disney and the 24-hour sports channel ESPN. Why is having a big fan base important? Keep reading.

2. eSports mean big money.
Competitive gaming generates a lot of money, and not just for the people and companies who develop and sell the video games being played. Newzoo reports that eSports have generated $656 million in revenue so far this year, and the figure is expected to top $1.5 billion by 2020. This move means a new source for local and state tax revenues, opportunities for job growth, and the possibility of attracting other eSports teams and businesses to North Texas. It's also significant because the state budget's tax incentive program for major media projects is weak and growing weaker.

3. eSports are becoming big high school and collegiate sports.
As competitive gaming grows its sporting status, more players are needed for competitions. Schools on both the high school and collegiate levels are opening training grounds. High school eSports leagues are forming all over the country, focusing on some of the most competitive eSports games, such as League of Legends, Dota 2 and Counter-Strike: Global Offensive. Seventeen colleges offer competitive gaming scholarships to attract top talent, according to the sports tech blog Starters. It's only a matter of time before the NCAA sees another opportunity to exploit this pocket of talent. 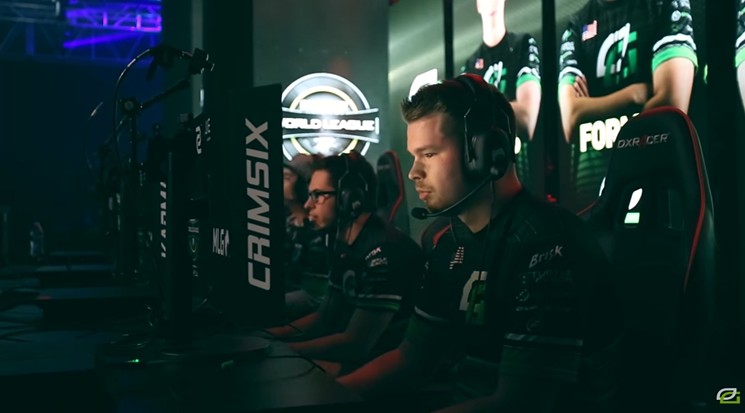 Athletes for the OpTic Gaming team compete in the Call of Duty World League tournament in Orlando.
screenshot by Danny Gallagher/courtesy OpTic Gaming
4. eSports could become an Olympic event.
The International Olympic Committee is mulling the possibility of adding competitive gaming to the 2024 Summer Olympics in Paris, according to the Washington Post. Imagine the fame a city could gain by being the incubator of another Olympic champion. It could happen if OpTic Gaming or another Dallas-based eSports team wins a spot on the U.S. Olympic team in 2024.

5. eSports are sports.
Competitive gaming more than qualifies as an athletic sport. Researchers from the German University in Cologne conducted a five-year study on the physical demands and effects of eSports on athletes. Competitions require a high degree of tactical planning and advanced motor skills. A professional gamer can also expect to experience a high pulse, "sometimes as high as 160 to 180 beats per minute, which is equivalent to what happened during a very fast run," says professor Ingo Froböse, who conducted the study.