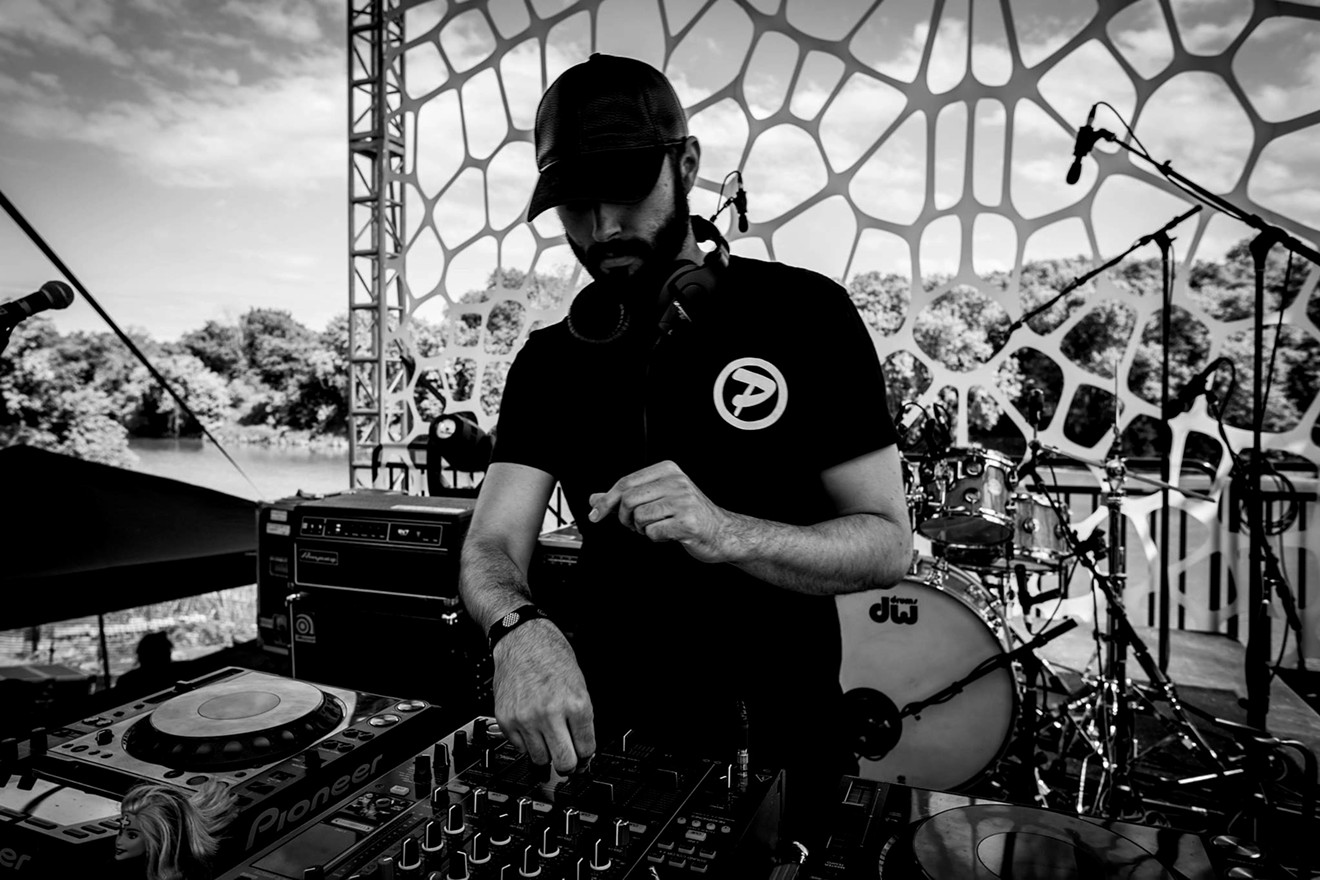 When Chris Lund isn't traveling to play festivals like Burning Man, he's teaching audio engineering at Collin College. courtesy the artist
You might think electronic dance music, or EDM, is all about glowsticking and furry boots. The glow sticks are pretty cool, it's true, but the genre is also about a lot more than that: The combination of deejaying, audio engineering, production and songwriting requires real artistry.

Over the last few years, EDM has erupted in popularity; artists like the Chainsmokers, Flume and Skrillex dominate the charts. Their community of fans has grown too large to ignore, and Texas is their new mecca.

Dallas has long been home to clubs where you can hear innovators in the genre, like Lizard Lounge and It’ll Do; and festivals such as Lights All Night and Something Wonderful attract thousands from all over the country, and even world, each year. Naturally, that means we also have a lot of artists right here in DFW who are making music on the cutting edge of EDM.

Here are 10 Texas-based EDM artists who we think deserve your attention.

Left/Right (Dallas)
Chris Lund has been making electronic music in Dallas for over 15 years under the name Left/Right. In that time he’s scored gigs at massive festivals such as Burning Man, Middlelands and Lights All Night; and coverage in Rolling Stone, Insomniac and, most recently, on BBC Radio 1.

Music is Lund’s passion and he shares it with others as an audio engineering teacher at Collin College. “This semester I’ve been taking it a lot lighter because I’ve been doing more touring,” he says. “I had to take last semester off for the same reason. But I’ve been teaching there for five years.”

When he’s not teaching, Lund runs Left/Right Pro Audio in Deep Ellum with another electronic artist, Gabriel Isenberg. “I do both mixing and engineering, but I also record vocals and teach electronic music production,” he says.


Left/Right’s home label, Punks Music, is based out of the UK and fronted by British production duo Stanton Warriors. Lund describes his releases through Punks Music as “broken beat and garage-y.” But stateside, he and fellow Dallas artist Zander run their own label called BRØKEN, which features heavier electronic artists.

When we spoke with Lund, he was preparing for several SXSW appearances. He’s dropping a new Punks compilation at the end of March and will also be playing Middlelands festival in Todd Mission, Texas, in May. But the most exciting news for Lund is his first appearance at this year’s Glastonbury Festival, a five-day arts and music extravaganza in the UK. courtesy the artist
Squalzz (Dallas)
John Paul Louden isn’t your average 16-year-old. Louden, who goes by the name Squalzz, has only been making music for about a year and a half, but in that time, he’s scored some pretty impressive buzz for a high school kid making beats out of his bedroom.

“It’s been kind of a quick start to my career, not anything crazy,” Louden says. “But I got played a lot on [SiriusXM] BPM Radio for like six months with my Marshmello ‘Alone’ remix, which has really helped my career.”

Growing up, Louden says he saw himself becoming a rockstar like his idol, Guns N’ Roses guitarist Slash, rather than a DJ. But all of that changed the second he heard “Scary Monsters and Nice Sprites” by Skrillex. He quickly picked up some equipment, learned the basics and began his electronic journey. And after hearing their son on BPM Radio, Louden’s parents suggested he try his hand at live performances, which led to his playing two shows at Austin’s Scratchhouse.


In addition to offering his music through all the major streaming services, Louden recently dropped “Nocturnal,” an original project with New York-based artist Jake Gersha that features Washington D.C.’s Layne, which Louden says took about six months to put together.

Right now, Louden’s top priorities are finishing out the school year and working on his music.

“I definitely want to get booked more this summer — you know, because of school. Trust me, it’s something else trying to work around that schedule,” he says. “I just don’t wanna just be some guy with almost 1,000 Soundcloud followers.” Corey Frey
Lady Parts (Dallas)
Dallas-based electronic duo Lady Parts is the brainchild of artists Austin Maddox and Eric Sauber. Both Maddox and Sauber started playing guitar at an early age, but over the years they’ve picked up other instruments, too. While Sauber had been playing piano since he was seven, for Maddox, it was the production side of things that really caught his eye.

“I got a program called Acid 2.0 and played around with loops and samples on my computer a long, long time ago, before it was ever cool,” Maddox says. “After college, I dove into a new program called Ableton. Skrillex was really poppin’ off at the time and the whole EDM thing really started happening, so it really started going from there.”


Before forming Lady Parts in 2013, Sauber had been in several bands including The Secret Handshake and Power Strangers, while Maddox had begun producing. The two ended up collaborating on several occasions, which led to their discussion about starting a duo. “We had lunch one day, just talked it out and made it official,” Sauber says. “We just wrote it down that it would be simple songs with cool, creative drops.”

And that’s exactly what they did. Lady Parts have shared the stage with artists like R.L. Grime and Pretty Lights and played larger events such as Austin’s Euphoria Festival. “Most recently we were asked to play Boo! [Festival] at South Side Ballroom,” Sauber said. “It was a two-day thing for Halloween with names like Zeds Dead and Baauer.”

This year, Lady Parts have already released three new tracks including their bootleg remix of Migos’ “T-Shirt,” as well as an original, chill trap/future bass track called “Through the Night.” Most recently, the duo dropped their original mix “Unshakable” on the Dallas record label No Parents No Rules. 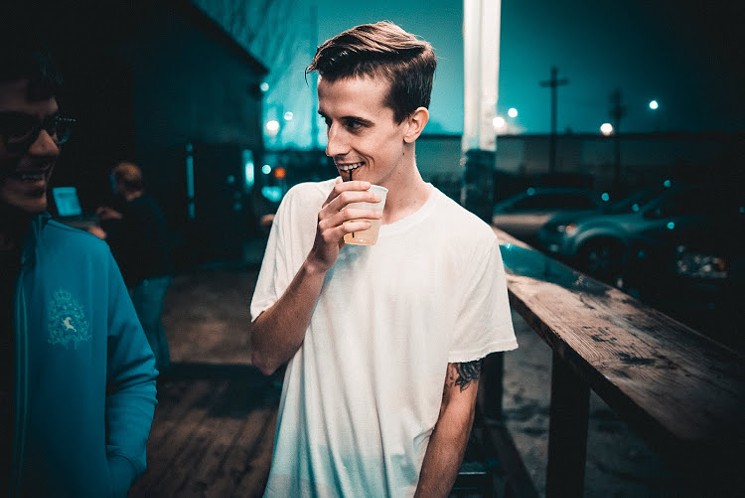 Mike Victorick
Swanbeats (Lubbock)
Of the artists on this list, Hereford native Ryan Scott probably had the most unconventional start to his EDM career. It all began in a barn for the artist known as Swanbeats. “I’ve been making music for like six years,” Scott says. “I started when I was 18 by making hip-hop beats in my parents’ barn, just recording my friends rapping. I was done with athletics and I was trying to find another outlet.”

After high school, Scott left home to study at Texas Tech University in Lubbock. It wasn’t until he turned 21 that he really started taking his music seriously. Since then, he’s played Euphoria Music Festival, Trapfest, Foam Wonderland and Waco’s Neon Paint Party — but he’s not always playing alone.

Depending on the size of the venue, Scott brings along an enormous, inflatable swan who enjoys crowd surfing. “Her name is Lucille and she is a hassle,” Scott says.


Lately Scott has been feeling pretty great about his music. Within the last few weeks, his original track “So Young” hit the Spotify Global Viral Top 50 playlist. The track, which features two other Texas artists, Austin’s Evolsi and J-Clark, hovered there for several days. It was enough to get Swanbeats verified on Spotify, not to mention over 450,000 plays.

“To see a song that I made be so successful — to be up there with all of those artists like Eminem and Ed Sheeran — it was really dope,” Scott says.

For the time being, Scott is focused on touring and getting his music to more people. “You know, I kind of just started making music as a joke. I don’t have a regular background,” he says. “I just enjoy doing it and [my friends and family] push me to do the best that I can, make stuff that I like and to not care about what anybody else thinks.” Thanin Viriyaki
T-Rexx (Dallas)
DJ T-Rexx has been on the electronic music scene since 2010. At that time, she was simply known as Thi Phung: your average, sheltered college kid with little-to-no night life experience. “I didn’t go out, I didn’t know anything about the club scene. So, when you’re that sheltered for that long and you eventually go out, you have a blast,” Phung says. “So, I made a lot of friends and started building up a huge network and one of the promotion companies noticed.”

As Phung puts it, the promotion company wanted her to get involved with their operation. She said yes, but with the stipulation that someone teach her how to deejay. They obliged and when she showed up for her first day, she was greeted with a set of decks and not much else. “I was sort of pushed out of the nest before I was ready to fly,” she says, adding, “I had to pick it up really quickly, but then I started getting residencies at places like Plush, Buddha 9 and Bella 32.”


For a few years, Phung didn’t see her newfound hobby as anything more than that, even though she was spinning regularly around DFW. But last year everything changed. She started making her own music and looking beyond Dallas for opportunities. “I picked it back up, started focusing on myself as an artist and revamped my image,” she says.

With help from a mutual friend, who happens to be a manager with Ultra Asia, Phung will be hopping around Asia on a mini-tour. “I’ll be going to Tokyo, Bangkok, Singapore, Saigon and Na Chang,” she says. “Before [last year], I didn’t really look at [music] like something I could do as a career. But now I want to share it with people around the world.”