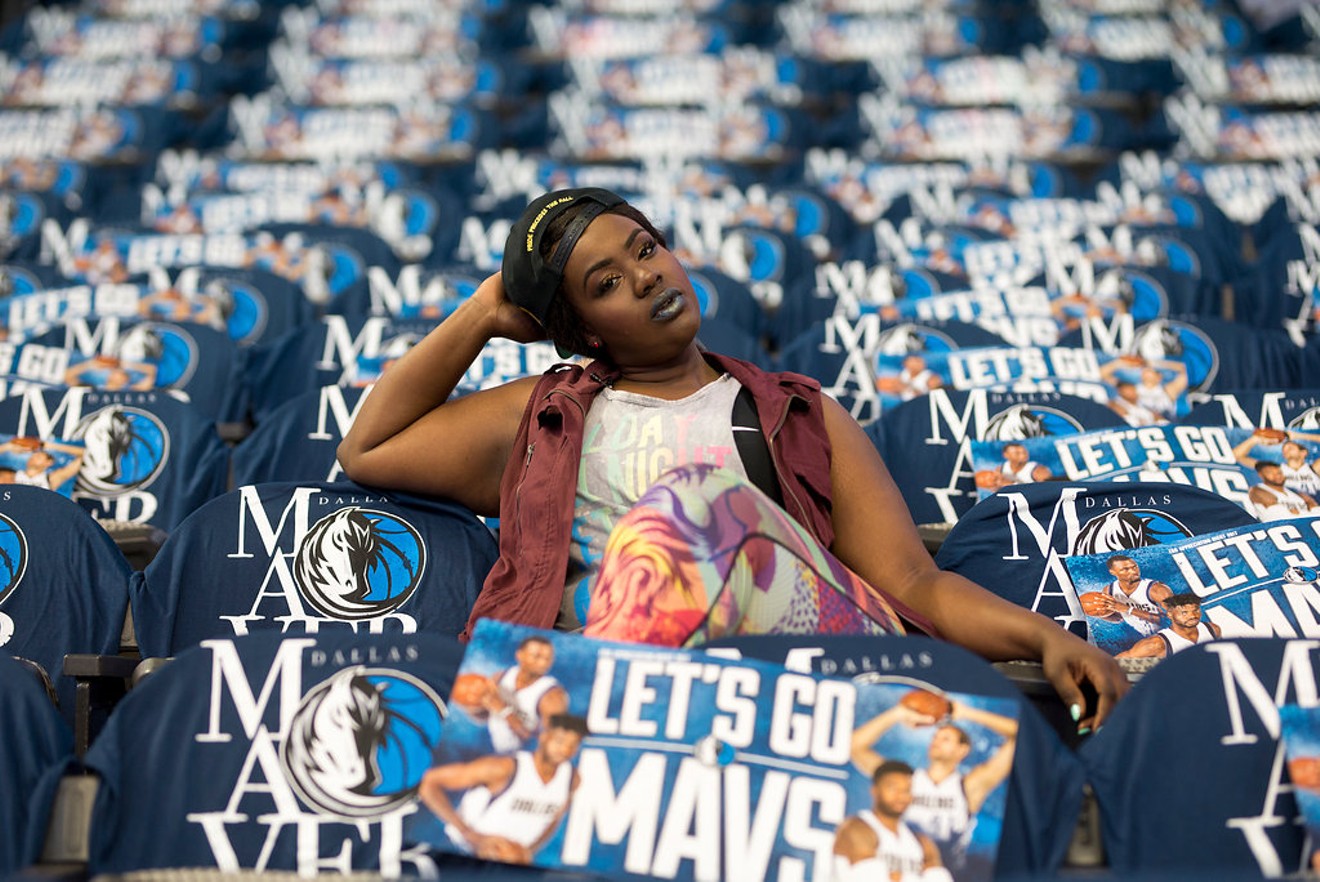 Ivy Awino knows everybody in American Airlines Center. And that’s not much of an exaggeration.

It’s 5 p.m. Tuesday and the Dallas Mavericks will take the court in roughly three hours to play their last game of the season. Awino, the team’s DJ — now better known by her DJ name, Poizon Ivy — is making her rounds around the arena saying hello and goodbye to her friends, colleagues, and the fans.

Awino was born in Kenya and primarily raised in Dallas, but American Airlines Center might be her true home. Awino was a ball kid for the Mavericks from 2003 to 2008. Today she's the team's first female DJ and only the second female DJ in the league. As she walks through the arena, she’s taken down memory lane.

“This is where I met Chris Brown,” she says. “And Tyra Banks there.” Then she points at an open area. “Right there, I remember them rolling out the trophy. Right there; when we lost the finals in 2006. I had so many memories in this building.”

After she says good luck to the ball kids and exits the room where they gather before each game, she runs into coach and former player Darrell Armstrong.

“Darrell was playing when I was a ball kid,” she says. “Ain’t that something,” he replies. “When she told me that, I said, ‘Huh.’”

For DJ Poizon Ivy, the American Airlines Center is home.
Brian Maschino
She reminisces with him for a few minutes and then heads into the control room where TV monitors line the wall. She picks up the log for the night, which maps out what will happen during the game.

She walks slowly across the court to get from the back of the arena to where her DJ station is, making sure to converse with every person she knows.

There are a few fans already seated at their court-side seats. Awino high fives the kids and introduces herself to the adults. “Oh, I’ve always wanted to know the team DJ,” one woman tells her.

“It’s the most genuine way of meeting people,” Awino tells me as we walk away. “Just saying hello.”

At one point, amazed by her extreme extroversion, I ask her manager, who is following Awino around and Snapchatting her interactions, if this is a persona. “This is just Ivy,” she says. 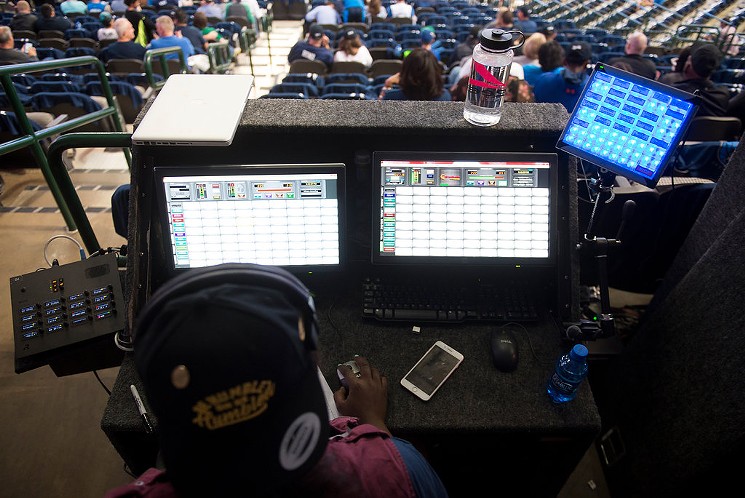 As of now, Awino works from a two-computer system, but she's hoping the Mavs will add turntables next year.
Brian Maschino
As a child, Awino loved sports. But her real dream was to one day become a pop star. When she was 5, her grandmother gifted her a 12-key baby grand piano and she also learned to sing and play the cello.

At 9, she moved to America to attend The Hockaday School, and went on to study musical theory at Marquette University in Wisconsin. During college, she worked as a street team intern for Atlantic Records, where she met her now-manager, Joy Young.

“Joy and I were working Atlanta, going to see DJs to see if they could play music for us. I realized that they have all the power, you know,” Awino says. “Not only that, but think about when you're at your favorite concert and the DJ plays a song that you just love. That feeling you get — that’s what I love. You know what I mean?”

Her interest was sparked so she began learning from her friends who were DJs, including DJ Animosity, who primarily trained her.

“He actually dropped off the turntables at my house and left,” she says. “Said, 'Figure it out,' so I had to figure out how to set them up. I literally was — I don't want to say ‘hazed’ into it, but he made me learn everything the hard way and I think that was the best because I never forgot.”

From there, her deejaying career took off. She played at college parties, worked for Marquette's radio station, and then started opening for big names, including Wiz Khalifa at the music festival Summerfest.

“I got seen by 25,000 people and there's a picture of me with my hands in a praying form before going on because I think it's that moment when you're like, ‘Crap, what did I just get myself into,’” she says. “When you're playing and the playing goes a little too far? I was like, ‘Oh, man. No turning back now.’”

Awino is also an avid sports fan, which makes her position as the Mavs' first female DJ doubly exciting for her.
Brian Maschino
After graduating Marquette, Awino moved back home to Dallas to raise her newborn baby while also freelancing as a DJ. The Mavs hired her in 2016, so she's now able to indulge both her love of music and sports in her job.

If you pay close attention, there is always sound during a Mavs basketball game. Whether it’s music playing during a timeout or a simple “Defense” chant, there is sound. And Awino is the woman behind it all.

Before Tuesday’s game, Awino looks over the minute-by-minute log. Former Dallas Cowboy Tony Romo will run out with the Mavs this game to celebrate his retirement from the Cowboys. Awino asks a colleague, “We should play ‘We Dem Boyz,’ right?”

A few minutes later, Chris Arnold, the Mavericks’ game night emcee, asks Awino if she can play "This Is How We Do It" during his first segment of the night. “Consider it done,” she responds. And 30 minutes later, Arnold does his segment and Awino plays the song.

Awino works with a two-computer system. She’s not playing music on turntables; however, she says she hopes to have turntables next season. “Anybody can do this job if they know the software. Turntables would make it better because I’m an actual DJ,” she says.

Early on in her career, Awino opened for Wiz Khalifa to a crowd of 25,000. Now she regularly plays to a similar crowd at the American Airlines Center.
Brian Maschino
But not everybody can do this job. And that’s made apparent several times throughout the pre-game and game. When one of the computers goes down and she’s suddenly forced to work with only one, causing half of her logged sounds to be unavailable, she never hesitates. She uses the sounds she has access to and works through the minor three- to four-minute crisis until the computer is up and running again.

The fans sitting in the seats surrounding her DJ station have all come to know Awino. One asks her to get in on a selfie. Several come by and hug her. She says some ask to hear songs. And the fans aren't the only ones; players have made requests as well. The first was Mavs player Justin Anderson, asking for “Cash Machine” by D.R.A.M.

“I know Dorian Finney-Smith is a big Kodak Black fan,” she says. “J.J. Barea and I talk about playing reggaeton, and he's like, ‘What a good thought.’ I’m conscious of the fact that we have guys from everywhere. I try to make sure I learn about their musical interests and tastes.”

Her knowledge of sports is also useful on the job. She often imposes silence when she anticipates a big play.

“Watch,” she says. She waits a few seconds and then as No. 3, Nerlens Noels, dribbles toward the hoop, Awino silences the arena. He scores. And then immediately after the basket, she plays a brief snippet of a song to celebrate.