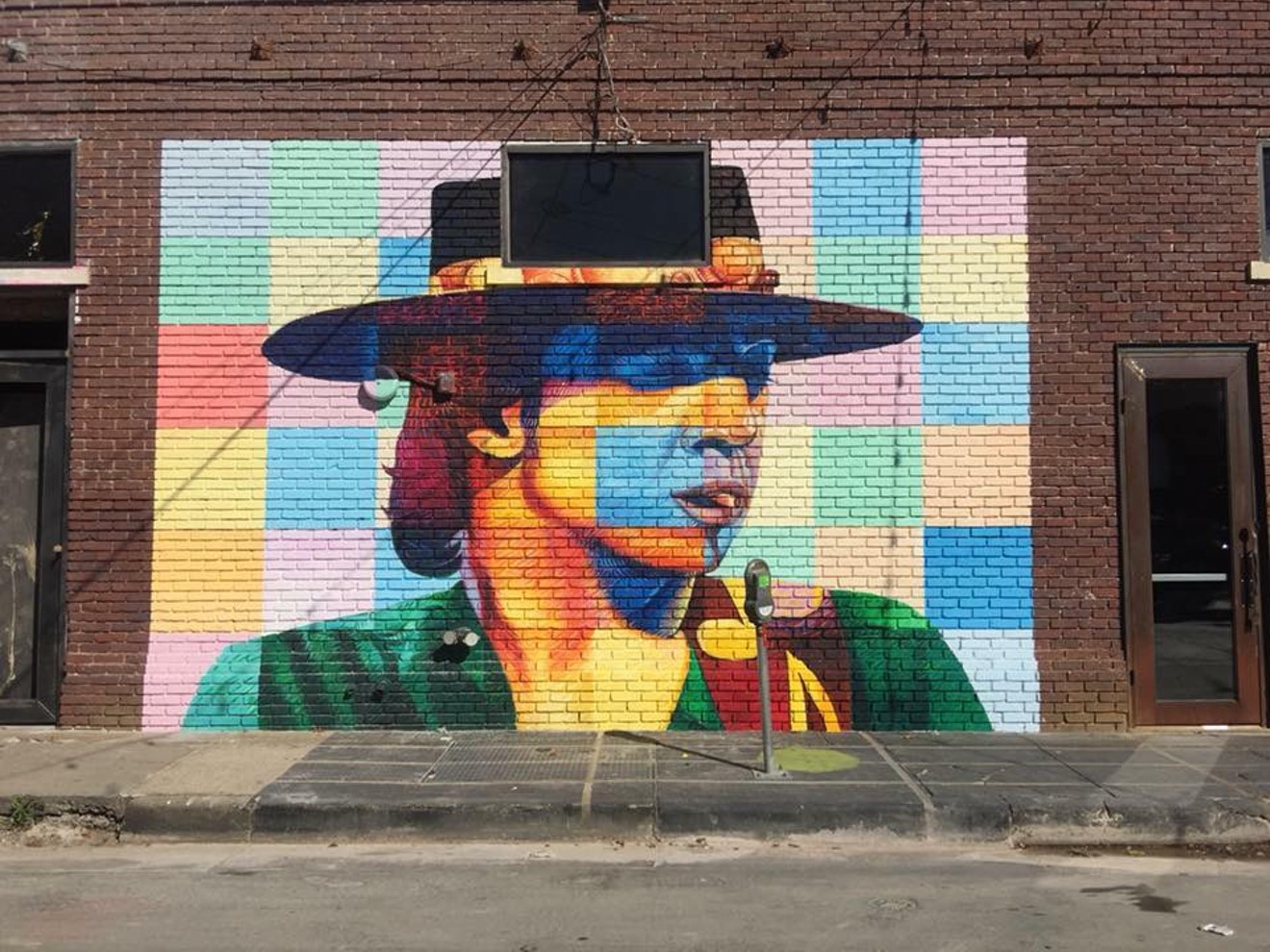 "Stevie Ray Ellum" is at Crowdus and Main streets in Deep Ellum. Rawlins Gilliland
Local artist Steve Hunter’s latest mural is a kaleidoscope of colors depicting the legendary musician Stevie Ray Vaughan. Even in the abstract block colors, viewers can recognize Vaughan’s iconic hat and see that the mural pays homage to the Dallas-born musician.

“While painting the mural, even early on, people recognized who it was and would stop to tell me their stories about Stevie Ray,” Hunter says.

Vaughan was a guitar legend and an influential ambassador for the blues who achieved mainstream success. His popular hits include “Pride and Joy,” “The Sky is Crying” and “Crossfire.” He died in a helicopter accident at the age of 35.
Hunter's rendering of the local legend, finished last month, is on the side of the restaurant Stirr, at the intersection of Crowdus and Main streets in Deep Ellum. The mural is called "Stevie Ray Ellum" (@stevierayellum on Instagram), and it's one of three Vaughan murals that Hunter has worked on.

“The mural is one of three Stevie Ray murals I recently completed in Deep Ellum,” Hunter says. “The other two are on display at Dots on Commerce and at Deep Ellum Art Company. I had always wanted to paint a mural of Stevie Ray in Deep Ellum, so this was the chance to do just that.”

In the last few years, the painting of murals has increased in Deep Ellum. One of the main reasons behind the change is the 42 Mural project. In 2015, real estate developer Scott Rohrmann came up with a plan to create 42 murals on properties in the neighborhood owned by his company.

Hunter’s proposal was chosen in the first round of murals, and he created "Deep Rawlins."

“The 'Stevie Ray Ellum' is a part of the 42 Mural Project,” Hunter says. “I completed another of their murals two years ago called 'Deep Rawlins,' which is a portrait of local poet Rawlins Gilliland.”

When the time came to replace the original 42 murals with new ones, Hunter’s "Deep Rawlins" won the Community Award. The mural’s Instagram, @RawlinsGilliland, is filled with images of people posing in front of the work. Hunter enjoys the community involvement of public art.

“People seem to enjoy it, and that gives me a great sense of satisfaction,” he says.