"It's been 18 years! Do I look different? You guys look awesome!" frontman Tim DeLaughter shouted at the crowd. Mike Brooks
Tripping Daisy
with Pearl Earl
Club Dada, Dallas
Thursday, May 11, 2017

Club Dada is packed shoulder to shoulder with Gen Xers. They remember Deep Ellum in the '90s – when Kurt Cobain got in a fight with a bouncer at Trees and Butthole Surfers wrote songs about Dallas. But tonight they're here partying in the name of a local legend of that era, Tripping Daisy, at their first show in 18 years.

Frontman Tim DeLaughter looks out into the crowd. He's just finished leading the band through their encore. "It’s been 18 years, do I look different," he shouts. "You guys do, you guys look awesome!”  Then he leads the band into a second set, including an abridged six-song version of the one they'd already played.

But most of them stayed in Dallas, and in January of this year, hints at a Tripping Daisy reunion began to appear on the band's Facebook page. Club Dada was the first venue the band ever played, so it's a fitting location for their first show back. Saturday they'll play Dallas again at Homegrown Fest.

At 8 p.m., the line to get into the show snaked a long way down Elm Street.
Mike Brooks
click to enlarge

Fans clamor for merch.
Mike Brooks
At 8 p.m., when doors are supposed to open, people are still anxiously waiting in a line that snakes past Black Swan Saloon several doors down. Tensions inside are high as Club Dada's sound engineers scramble to find an extra generator to accommodate the band.

Chris Todd Penn, the proprietor of Good Records and DeLaughter's manager, is making sure the band's merchandise is displayed for the crowds. Matt Cliff checks over the last-minute poster he printed at Lewellyn's Print Shop. It shows a pickle-man hybrid riding a rocket pop.

DeLaughter paces back and forth amid the chaos, doing his best to avoid interviews as people set up the show. This concert is the first of a six-show test run that will determine whether they commit to something more permanent. You can see the weight of the moment on the band members' shoulders.

Opener Pearl Earl does a sound check on Club Dada's outside stage. The all-girl psych-rock band from Denton, best known for their song “Karaoke Superstar," seems stoked to have the opportunity to play on such a momentous occasion. “It’s pretty trippy, actually,” lead guitarist Ariel Hartley says. "I used to listen to Tripping Daisy with my mom all the time in the car, and my brother is a huge fan. They were always a huge household name for us in the '90s, and I didn’t even play music or guitar yet.” 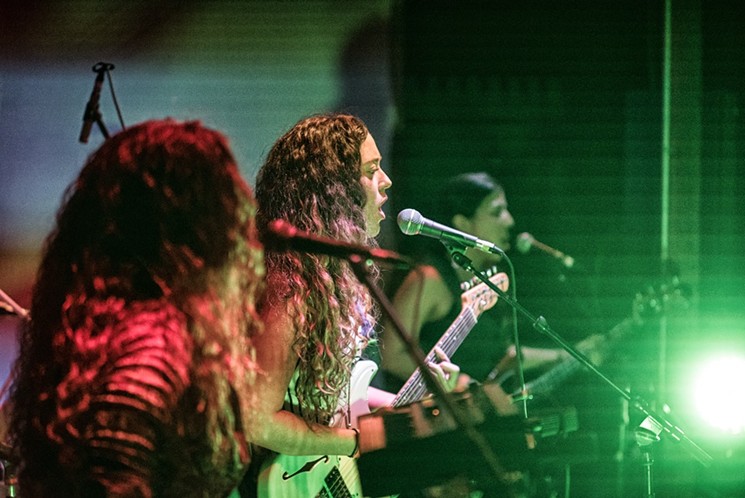 Opener Pearl Earl gets the audience ready.
Mike Brooks
The doors open at 8:40 and fans rush in. Some take bets on whether there will be a mosh pit. In the crowd are many young musicians playing Deep Ellum today, who didn't have the chance to see Tripping Daisy in their heyday.  "It feels amazing," says Logan Kelson, of Talkie Walkie. “I’m a huge fan, and never got to see them in the original line up."

Other attendees remember seeing them frequently until their breakup in the late '90s. “I used to see them every show, almost every show," Dawn Aydelott says. "In the Observer, they used to put in secret code words or titles, and you'd have to know their songs to know they were playing – like my favorite one was when they said the 'brown-eyed pickle boys' were playing at this venue in Deep Ellum. You knew it was them.”

After psych sirens Pearl Earl kill their set, fans begin to push into every crevice of Club Dada's patio. People can even be seen peeking over the fence of Off the Record next door, holding signs made out to Tripping Daisy.

Lights beam down on the crowd, which applauds each time one of the band members goes on stage to sound check their instrument. Since tickets were $55 and the venue is small, this truly is an audience of Tripping Daisy's biggest fans.

The show was at capacity, so fans turned up to Off the Record next door and peeked over the fence, dropping down Tripping Daisy signs.
Mike Brooks
Fifteen minutes past 10, Tripping Daisy take the stage wearing all black and grey. The audience roars as they head into “Trip Along.” But half-way through the song, the speakers go out, leaving only a guitar and drums going.

DeLaughter is clearly frustrated that the dreaded electricity problems are now rearing their head. Usually this is when an audience would boo, but instead everyone in the crowd continues to sing the lyrics and the energy remains high until the song ends.

Then silence. Well, Club Dada's version, anyway. A show at Armoury D.E. a few doors down is raging and local band Vegan Shark can be heard loud and clear. For a moment, it feels like they are a surprise guest band on the bill.

Eight minutes later, the speakers come back on. DeLaughter apologizes and thanks everyone for their patience, and Tripping Daisy slam into their song “Rocket Pop.”

Brave souls crowd surf during Tripping Daisy's two-hour set.
Mike Brooks
As they play, an old-school movie projector casts animated movies onto them, mixing with another light installation of hypnotic black and white swirls and bubbles. The crowd throws beers and continuously sings along, and a few brave people attempt to crowd surf. A friend of the band climbs on Club Dada's roof and begins throwing glitter.

"This is so surreal. I can’t believe I’m watching this,” Kelson says.

During “Cradle Song,” each member slowly exits the stage. It seems like the last pitch, and the crowd screams for more, desperate to get the fill they've waited 18 years for.

Tripping Daisy come back out for what is assumed to be their encore and play five more songs, one being “I Got a Girl.” It's arguably their biggest hit, but it's met with the same energy of the other songs.

“Hope you're happy, hope you had a good time, love you guys,” DeLaughter tells the crowd, turning away from them. Some people start to walk out, but a persistent bunch of fans continue to linger at the stage. Then DeLaughter changes his mind.

“Fuck it! We’re going to do another song,” he shouts into the mic. Half of the crowd that had been leaving swarms back to the stage and Tripping Daisy launch into "Trip Along" all over again. What should have been an hour-long set turns into a two-and-a-half-hour show.

At this point, whoever bet there wouldn't be a mosh pit loses a few dollars. As one breaks out, Pearl Earl drummer Bailey Chapman can be seen coming off the side stage, just to get a piece of it.