St. Vincent Was Flawless During Her One-Woman Rock Show If St. Vincent had any missteps during her Bomb Factory performance — never mind, she was perfect. Mike Brooks
How does a single performer captivate a 4,000-seat venue? First off, she has to have a larger-than-life persona. Second, she has to have the music chops to carry a whole stage with no backing musicians. Three, it doesn’t hurt to look as good as Annie Clark, also known as St. Vincent.

Clark expertly stitched those elements together during her show Saturday night at the Bomb Factory. Standing alone, sans backing band with only a guitar strapped to her chest, Clark commanded the venue from start to finish, shredding her way through the underbrush in a thicket of concertgoers for a solid hour and a half.

Standing at the front of a darkened stage with the curtains drawn behind her and only a spotlight illuminating her, Clark kicked off the set with “Marry Me” from her debut album of the same name, released more than 10 years ago. The performance was stripped bare, which let her crystal-clear vocals shine through the darkened auditorium. After that was “Now, Now” from the same album, which got a delightfully buoyant and tousled arrangement, finished off by one of Clark’s infamous thrashing guitar solos thickened with tons of reverb and lit by a strobe.

Her one-woman show was a bit like a futuristic vaudeville, with Clark dressed in hot-pink patent leather as the robotic femme fatale. Despite the attire, early in the set, Clark was pared down to match her folksy music from a decade before. Act 1 of the night continued with older hits, “The Strangers” and “Actor Out of Work” from 2009’s Actor, that were subdued compared to her current standards. Mike Brooks
Clark continued chronologically, and hits from 2011’s Strange Mercy opened what could be considered Act 2 of the set, which also got a new stage arrangement as the curtains parted and formed a "V" behind her. It became apparent that despite being back at home in her native Dallas, Clark was not here to fuck around.

“I’m so glad to be here because I’m with friends and family tonight,” she said. Clark kept banter with the crowd to a minimum, instead letting her music do the communicating, but this was one of her first utterances acknowledging that she was in her hometown.

During the Strange Mercy standouts “Cruel” and “Cheerleader,” Clark possessed all of the presence and raw power of a full band as she strummed, beat and shredded the guitar, all while teetering in thigh-high pink stiletto boots and thrashing around the stage. She cemented the fact that despite being a solo gal on the stage, this was not a singer-songwriter shtick; this was a full-on one-woman rock show.

“Dallas, Texas, I can honestly say there's no place like home. Shit is insane, the world is insane, but you’re here, I’m here, there’s always something to dance about. So let’s go,” Clark told the crowd to introduce songs from 2014’s St. Vincent.

Clark morphed into a superhuman rock robot. She had been switching off guitars throughout the evening — candy-colored guitars of all shapes were lined up in a holding pen just offstage. But this time, her guitar-delivering minion was a futuristically dressed woman in a blue bodysuit who donned a black blindfold with tassels where her eyes would be. It was a visual delight. 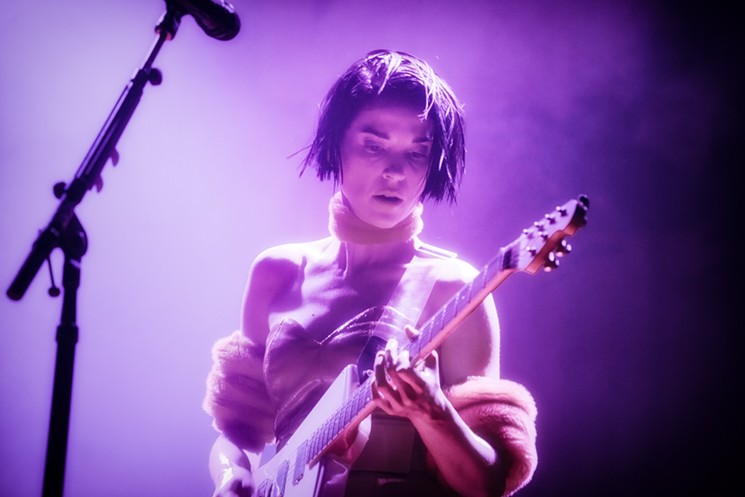 Mike Brooks
“Digital Witness” followed with a cacophony of sensory stimuli — strobes and hot pink and purple flashing lights lit up Clark as she pranced back and forth to the mic with quick, stiff baby steps while regaling the crowd with her guitar playing. She amped up her performance even more, saying, “I want to go faster, Dallas,” to introduce a frenetic “Birth in Reverse.”

As Clark flipped through her catalog of hits, speeding toward the present, her intensity doubled and tripled, tripping over itself as it crescendoed with her newest release, Masseduction, 45 minutes into the set.

She returned to a stage that had reconfigured yet again. The curtains were completely pulled back to reveal a big screen that played her electrically aesthetic music videos. Clark hopped on a circular platform, now dressed in a silver lamé mini-dress and booties to match.


“Dallas, Texas, I can honestly say there's no place like home. Shit is insane, the world is insane, but you’re here, I’m here, there’s always something to dance about. So let’s go." — St. Vincent

Clark fulfilled a deep-seated need for those in the audience who thrive on organization and order. While most artists intersperse earlier and more recent hits throughout their sets, Clark not only performed her songs chronologically, but she also played every track from Masseduction in the same order as on the album. It was delicious in its predictability and —because Clark is such a genius — also brilliantly unpredictable. How many artists do that?

If Clark hadn’t already brought the crowd to its knees with her amazing guitar playing, she got down on hers for dramatic effect during “Sugarboy,” a song that roused audience participation en masse after she dedicated the song to all the boys and girls in the crowd “and everyone who doesn’t fit neatly into either category.”

Toward the end of the set, Clark got a little chatty.

“It’s a very deep pleasure to be back home. I remember driving these streets in a Mazda Protege in the later part of the '90s — I’m not specifying the year; it's immaterial. Driving around White Rock Lake, waiting for something to happen ... it only took 20 years, but now you're all here. Dreams really do come true, Dallas, Texas,” she said with a chuckle before launching into “New York.”

Clark had completely wrecked the venue with her omnipotence and still had several more songs to perform. She bled it all onto the stage and looked amazing doing it. She’s the most giving sort of rockstar — the kind who fucks you like crazy, asks for a cigarette, then coolly walks out of the room.

If Clark had any missteps during her Bomb Factory performance — never mind, she was perfect.