When She Finally Showed, Erykah Badu Calmed a Salty Crowd with Trip Through Debut Baduizm Erykah Badu's sartorial choices are somehow mesmerizing in their weirdness. MIke Brooks
If there’s one thing that Erykah Badu’s birthday bash proved, it’s that greatness will not be rushed. According to the Bomb Factory box office, she was scheduled to go on at 10, two hours after the show opened, yet she didn’t actually take the stage until 11:45. A plethora of local acts kept the restless crowd entertained by performing short yet solid five-minute sets. They included Bobby Sessions, So-So Topic, Sam Lao, The Outfit, Cure for Paranoia and Leon Bridges.

Sam Lao is brilliant on her own; add to that her love of Badu’s music, which she inserts in her song “Be Cool,” and it was great to see Lao perform it live for the occasion. The only misstep with the local acts is that they didn’t have more stage time. There was a headliner to see, so the show kept the performers to a pretty brisk pace. Music legends like Pete Rock, Talib Kweli and Scarface performed longer, yet still brief sets.

Whether it was the sheer length of the evening (five hours total), or the fact that it was so crowded in the sold-out 4,000-person venue, something was causing people to be extra salty. Numerous confrontations almost turned into fights, especially during the languorous moments between acts, when the audience was largely left to its own devices. 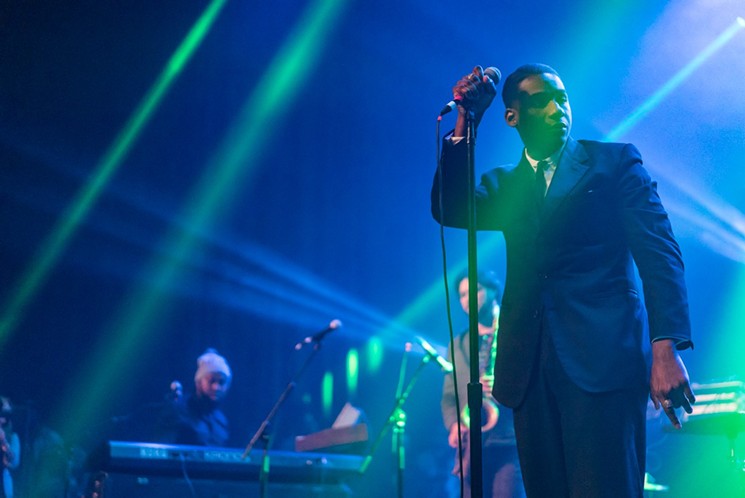 Leon Bridges and a host of other DFW natives played five-minute sets to entertain the crowd anxious for Badu.
Mike Brooks
Cedric the Entertainer was one of Badu’s surprise guests. He introduced her before the clock struck 11:30, and her posse of extremely professional musicians and backup singers improvised an introduction track that stretched on and on when it became apparent that the songstress wasn’t ready to take the stage.

Badu finally did make an entrance — a dramatic one, as she was backlit with fog — to roaring applause. Despite the prior negative energy in the room, no one in the crowd seemed ambivalent about their feelings toward Badu. It was all love.

People of all kinds, ages and backgrounds were there to take it in. At one point during the concert, Badu asked for the ’70s, ’80s and ’90s babies to scream, and surprisingly, the ’90s were definitely the most plentiful demographic in the room.

Erykah Badu was received with applause by loyal fans, despite showing up nearly two hours late.
Mike Brooks
The sheer volume of the turnout was never more apparent than at the entrance to the building. At 7:45, the line stretched down the block and around two corners of the building. One of those ’90s babies waiting in line was Lauren Steele, 19, a student at SMU from Portland.

She said she’s been listening to Badu since she was a child. “My mom is a vocalist and she used to play ‘Orange Moon’ all the time, and ever since then Erykah has been my girl. I was doing a photoshoot earlier, and they had an Erykah playlist on, and I realized how many of her lyrics I know,” Steele said. “She’s inspiring because she’s the perfect representation of a multifaceted women; she posted a tweet that went something like, ‘Don’t get it twisted, it’s all incense and something, but I got a colt 45 in my pocket.’”

Steele’s friend Brandi McLean is an alumna of Booker T. Washington High School for the Performing and Visual Arts where Erykah went, and she grew up being a big fan. “My mom would play Erykah on Sundays, and that’s what got the cleaning going,” McLean said. “I dressed up like her once, put a sheet around my head and sang ‘Window Seat.’” Talib Kweli was one of the biggest names to appear at Badu's birthday this year.
Mike Brooks
When Badu took the stage, she was a sight to behold. Whatever inspires Badu when she’s dressing herself isn’t to be taken lightly. She donned her signature bowler top hat, a red-and-white striped head scarf that looked like an American flag, and she was covered in layers including a white vinyl topcoat, patterned leggings and white vinyl thigh-high boots. It didn’t have to match or make sense. It’s her party and she’ll wear what she wants to.

Whether in a 200-person theater or a huge warehouse like the Bomb Factory, Badu is notorious for commanding the crowd with her infectious humor and powerful voice. She opened the set with “Hello” from her mixtape But You Caint Use My Phone. The song is a duet with Andre 3000, and it would have been almost too good to be true for him to come back for her birthday a second year in a row to perform the song with her. Fights almost broke out during the wait for Badu, but the mood changed to glee once she took the stage.
Mike Brooks
She named the party “Sauceizm” in homage to the 20-year anniversary of Baduizm and she took the audience back through her catalogue of hits from the album. She reminded us of the origin of “Apple Tree” and “No Love”; she and her cousin Free, who was on stage performing with her last night, recorded tracks for Baduizm from a bedroom in their grandmother’s house. Her most recent work But You Caint Use My Phone, serves as a nice bookend since she created it with prodigy producer Zach Witness in his bedroom at his mom’s house.

“My kids don’t even see color. [But] they know their history, their origins, their people,” she said. “Compassion, acceptance and patience is what I teach them.”

During Badu’s last song, close to 1 a.m., about 30 of her friends and family took the stage and brought out a unicorn themed birthday cake and a bicycle. Dave Chappelle, who emceed the event last year, was on hand again this year to lend a few wise words for his “good friend” and woman of the hour. “We never know if we get another birthday so we take a moment to make them great,” he said.