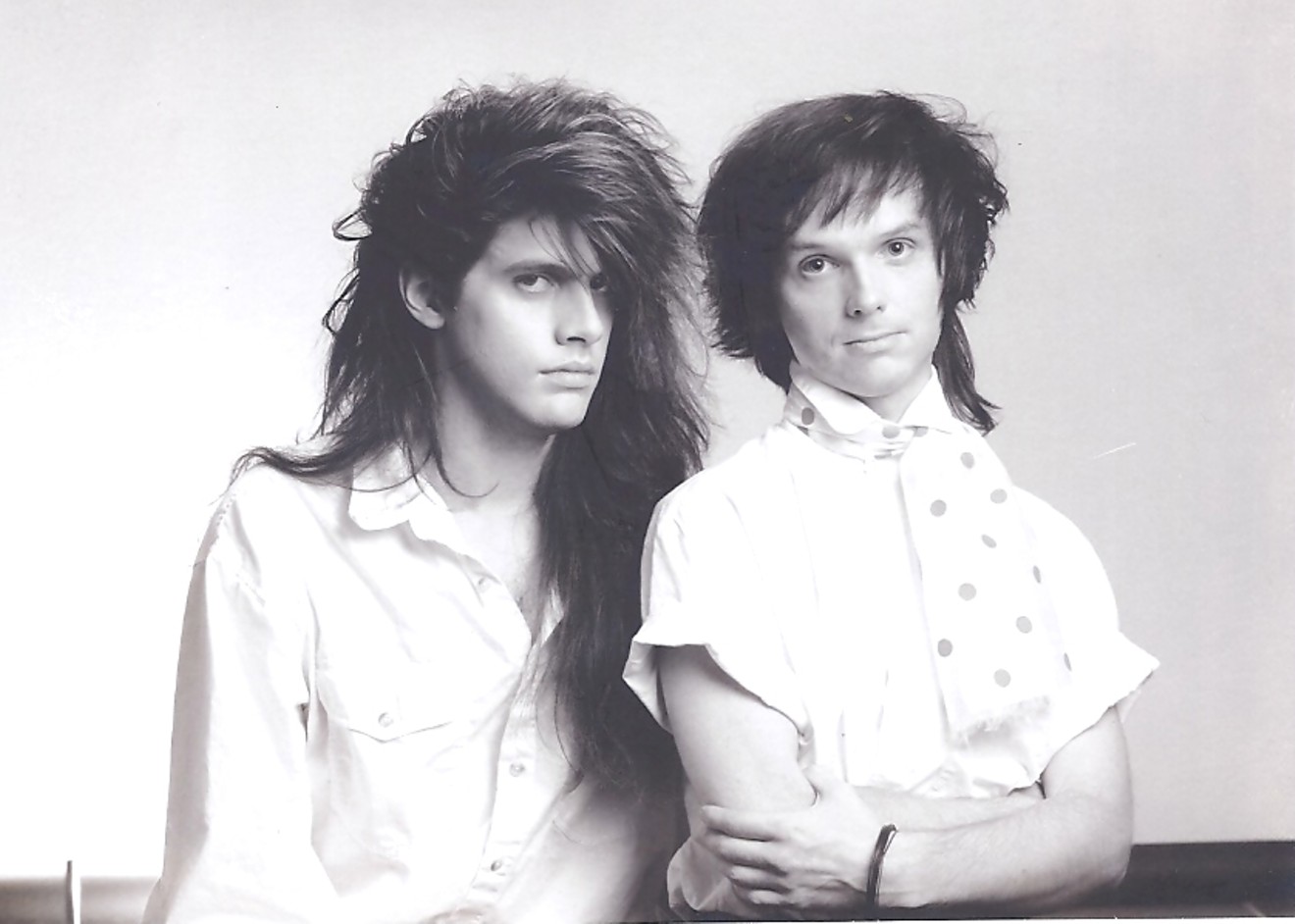 Will Loconto and Jay Gillian once lived rock star lives. courtesy the artist
The bags of mulch in the front yard for new flower beds resemble any ol’ house in the suburbs. It’s a nice red brick home, and the subdivision has one of those typical names, like Canyon Lakes, Dove Ridge or Grand Oaks.

Do not judge a book by its cover. What happens within the walls of this home is unusual. This is the home of Jay Gillian, founding member of T-4-2, a two-man new wave band with deep Dallas roots. At the height of its run in the late '80s and early '90s, there were private planes, acid-wash-clad groupies and a $200,000 marketing budget for its third album, Intruder.

Dallas' measures of success at the time included appearances at the legendary Starck Club, 94.5 FM The Edge compilation album inclusions and a deal with Columbia Records. Gillian and bandmate Will Loconto checked those items.

Gillian laughs while remembering an odd lineup at a 1991 MTV mini-festival in Omaha, Nebraska. Gerardo, the rapper of “Rico Sauve” fame, opened, T-4-2 was next and Joan Jett closed. The duo arrived in Omaha on a private jet and was escorted to the venue in a stretch limousine. An MTV host walked Gillian and Loconto to their trailer, which was outfitted with gourmet food and a full bar.

In rock star fashion, the T-4-2 members helped themselves and wrecked the place. Not long after, Jett and her manager entered the trailer, asking, “What the hell are you guys doing in this trailer?” The MTV representative had made a mistake.

T-4-2 played the Nebraska gig and then took another private plane to Dallas for a sold-out show at Lizard Lounge. Then, like a lot of bands, it broke up before releasing their fourth album, which it needed to approach Dixie Chicks status amongst Dallas bands.

That fourth album eventually happened, but it took a long time. There’s a 25-year gulf between Intruder and the latest, Decoder, which dropped this year.


"Songs came to us, and we wanted to share them. We know we’re not going to get rich or famous from this one." — Jay Gillian

“Time heals, and we’ve moved on from the breakup, but honestly I don’t know why we made the album," Gillian tells the Observer. "Songs came to us, and we wanted to share them. We know we’re not going to get rich or famous from this one."

Gillian is an artist and smart on the keys. Early inspirations are Depeche Mode, Our Daughter’s Wedding and Yazoo, but T-4-2 has always focused on creating its own sound. Musician blinders in effect, Gillian wasn’t aware of '80s new wave trends and didn’t own a pair of Z Cavaricci jeans. The band's downtown Dallas studio was home, and music was life.

Dated things are beloved now, and the new T-4-2 album is for people who love retro. A remastered version of the pair's 1989 album, Hot On Top, is also available.

“I wanted this album to have an '80s sound, and I wanted to make music about the kinetic energy of love,” Gillian says.

Original T-4-2 fans and young people looking for different sounds will enjoy this album. From start to finish, the 10 tracks are a quality listen. “On My Way to Mars,” “Make a Circuit With Me” and “Remember” are the work of seasoned professionals.

Gillian and Loconto made this album 200 miles apart. Loconto recorded the vocals from his home studio in Austin. Gillian played, produced and mixed the album in Dallas. Longtime friend and well-known Dallas producer David Castell offered production and mixing for “On My Way to Mars.”

It's unlikely that Gillian’s wife of 10 years will enjoy “Never a Night Goes By,” an ode to Adrian Olson, a former lover. Olson was Gillian’s rebound in the time after a divorce and T-4-2's breakup.

“My wife couldn’t name a single T-4-2 song. She doesn’t listen to our music at all," Gillian says, laughing.

T-4-2 makes music without hopes of riches and fame. And the two don’t give a damn what anyone thinks, including their spouses. In a world with endless handlers, publicists and image advisers, this is the band with bravado and backbone the world needs right now.

The album is available on Amazon.