Just Say No: 3 Items on the Dallas Ballot to Vote Against

Sharpen your hoe before entering the voting booth. apologies Ehrlif via Shutterstock
If you go to the polls Nov. 7 to vote on the city’s proposed bond, you’ve got a job ahead. It’s not going to be just a straight up and down yes or no deal for the whole ballot. If you did that, you would make some bad mistakes.

You may either like or not care about most of what you see at the top, which will be state constitutional amendments, but if you get too informal about the rest of it and just start ticking off “for” all down the list, you’re going to wind up voting for some things I bet you don’t really favor.

For example, a straight “for” vote all the way down would trick you into voting to preserve and protect Dallas County Schools. Mistake. That one you need to vote “against.”  We have talked about this before. The Dallas County school district is not a school district. It’s a boondoggle — the world’s worst school bus service. It’s only on the ballot because it’s so bad the state Legislature thought voters in Dallas County should be given an opportunity to kill it.

Every time you walk into a voting booth in Dallas County, you need to look at the ballot as if it were a rattlesnake and you have a sharp hoe in your hands.


The ballot item is worded as a proposal to keep the district alive. If you vote “for” the proposition, you will be voting to keep it. To kill it, you have to vote “against” the proposition.

Don’t even ask. Listen, every time you walk into a voting booth in Dallas County, you need to look at the ballot as if it were a rattlesnake and you have a sharp hoe in your hands.

The city of Dallas has a bunch of money-borrowing authorizations on the ballot, lettered as bond propositions A through J. We have already talked about one of the snakes in that woodpile, Proposition C, which is for $50 million for Fair Park, our beleaguered 277-acre exposition park in South Dallas. You are being asked to authorize the city to borrow $50 million and spend it on Fair Park at a time when we have not yet decided who is going to run Fair Park, for what purpose or how.

If some private entity is going to benefit from the $50 million, why doesn’t that entity pay some of the $50 million instead of us? Tell the city that after you have all the answers to those questions, you will be happy to vote on taxing yourself to the tune of $50 million for fixing up Fair Park. City of Dallas Proposition C: against.

And here’s another sleeper you will need to decide on for yourself: Proposition D, $48.75 million for “flood protection and storm water improvements.” Who could be against that?

Maybe you could if you reflect on a couple of things: First of all, the city is already sitting on $350 million in voter-authorized but still unused borrowing capacity for this purpose. The city’s plan for clearing that up is to borrow the whole $350 million first, then wait and borrow the $48.75 million it hopes you will vote for in this upcoming election.

Why hasn’t the city already borrowed the money from the earlier elections and spent it carrying out the projects for which that money was authorized? Because it hasn’t done those projects.

Why? Problems. What kind of problems? Lots of kinds, but the biggest one was an ethical contracting problem that has required the rebidding of the immense Mill Creek/Peaks Branch/State-Thomas Storm Drainage Relief Tunnel. That tunnel, with a price tag more than $200 million, is supposed to be deep, 5 miles long and big enough to drive a Jeep through. It is designed — pay attention to this part — to function as a catch-up and do-over to correct all of the huge drainage mistakes the city made in a 20-year-period in the development of everything from the Baylor University Medical Center area up through Uptown.

There is a lesson here. All of the developers who made the money in the Baylor-State-Thomas-Uptown corridor are long gone with the money. We’re still here. So we get stuck cleaning up their mess with our tax money.

Worse, we agreed to it in 2012 because what else were we going to do, let the hospital drown? And the city still hasn’t gotten it done because it can’t get the ethics right legally on letting the bid. So the bond authorization we gave in 2012, five full years ago, is still sitting on the shelf, unused.

“Hey, why don’t you guys get your house in order a little better and then come back to us on these two?”

Everybody in the field of flood control knows that by now. The Dutch have a national land-use and flood-control policy called Living With Water based on science and the assumption that most rainfall must soak into the ground.

I am not saying that we don’t have to fix erosion problems that are happening now or that have already happened. Of course we do. Where the stuff that is damaged is part of public property or public right of way, then the public has to pay for it. We all get that.

But let’s look at Proposition D. It is asking us to stack up another almost $49 million on top of the $350 million the city hasn’t spent yet on things it hasn’t gotten around to doing yet. More than $200 million of that was stymied by the city’s ethical problems even though an entire major hospital district is at risk. Meanwhile, the city has done nothing to change existing regulations to protect the public from this kind of liability in the future.

To me, propositions C and D are sort of the same deal. I look at both of them and think, “Hey, why don’t you guys get your house in order a little better and then come back to us on these two?”

On C, the city needs to tell us what Fair Park is now. Is it just a place where the state fair happens and nothing else? In that case, maybe instead of pumping $50 million into all those unused buildings, we should bulldoze them and plant cacti. 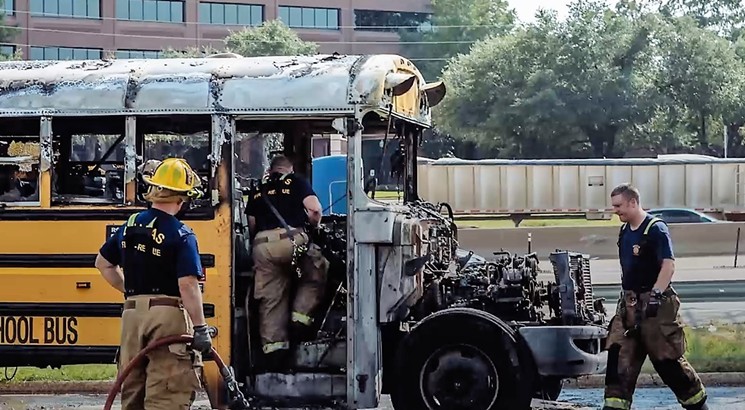 Dallas County Schools is a boondoggle — the world’s worst school bus service.
Kathy Tran
Is it going to be something else? What? Who will run it? Will it be at all self-sustaining? How self-sustaining? Why should we agree to borrow $50 million that we will have to pay back out of our tax money without knowing all this stuff ahead of time?

On the other one, D, about erosion control, would it be so terrible, so stingy, so mean and cutthroat of us to say we’d like to see the city spend the $350 million we already authorized in two previous bond elections before we pop for another $48.75 million?

In the meantime, while we’re waiting for another chance to vote on the $48.75 million, how about commissioning a serious scientific study of erosion and flood control so maybe we can avoid getting stuck with these huge heart-attack bills. Wouldn’t it be great if we could rejigger our development laws so that taxpayers never got saddled with huge environmental liabilities left behind by long-gone developers?

By my count, that makes three “againsts” — against city propositions C and D and against the oddly named “Dallas County School Board Special Election.” That should be enough snake killing for one election day. If you’ve got high boots, wear them.