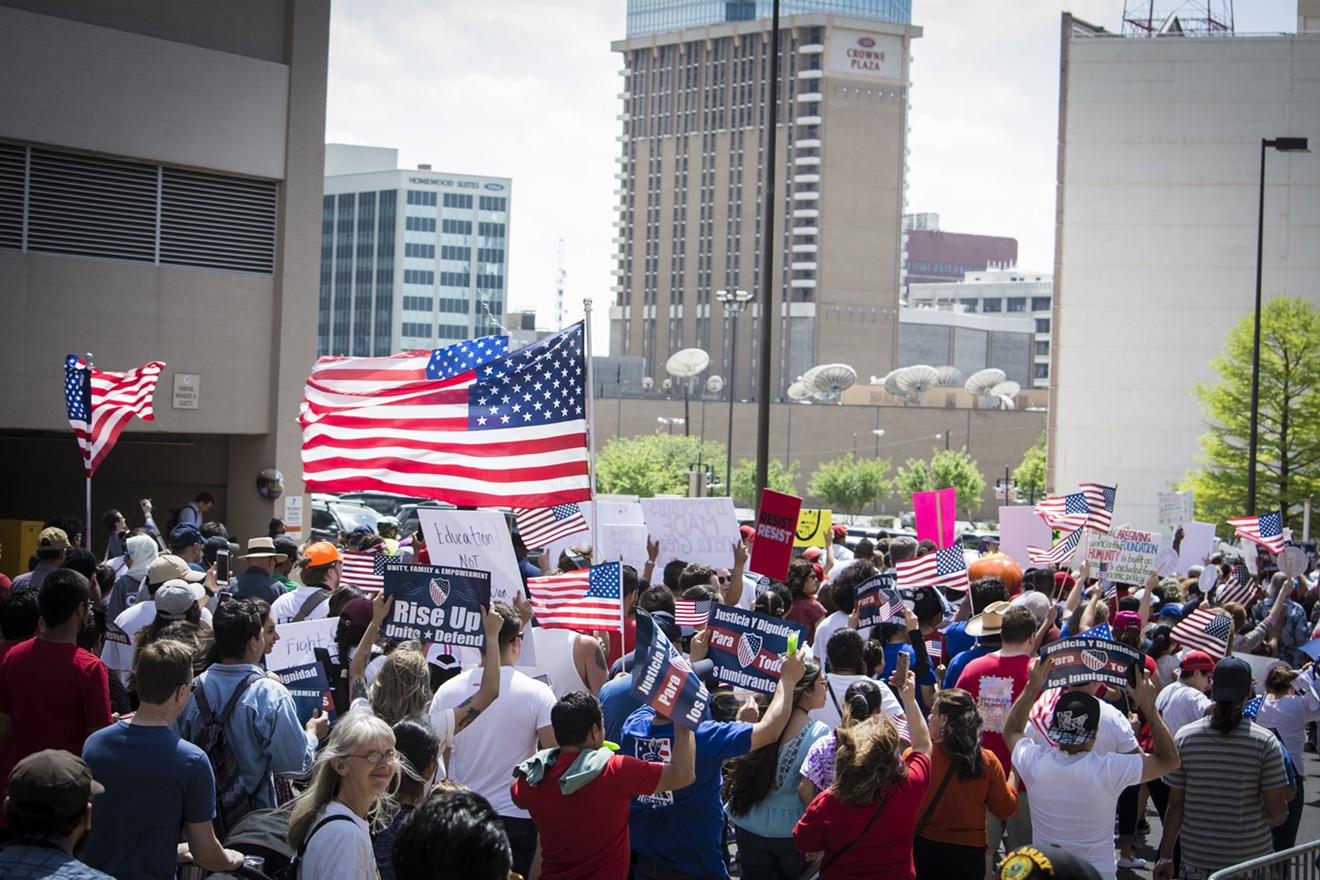 Thousands marched through downtown Dallas in the Mega March 2017 on April 9. Elroy Johnson IV
No matter who counted, Sunday's "Mega March 2017" wasn't anywhere close to as well-attended as organizers anticipated.

The last time Dallas' Latino leadership organized a march of this intended scale, in 2006, attendance was estimated at somewhere between 400,000 and 500,000. This time, even before the march, organizers guessed attendance might be 100,000.

On Sunday, they claimed after the event that 20,000 people showed up to march through downtown Dallas to Dallas City Hall for rights and respect for Dallas' immigrant and refugee population. After the march, Dallas police estimated 3,200 people marched and attended the subsequent rally.

The differences between Mega March 2006 and Sunday's edition didn't just include the number of participants. A decade ago, marchers were focused on the chance for comprehensive immigration reform in the United States. This time, after years of false starts in Washington, Adan Gonzalez said the march was about visibility and safety rather than pushing any specific reforms. 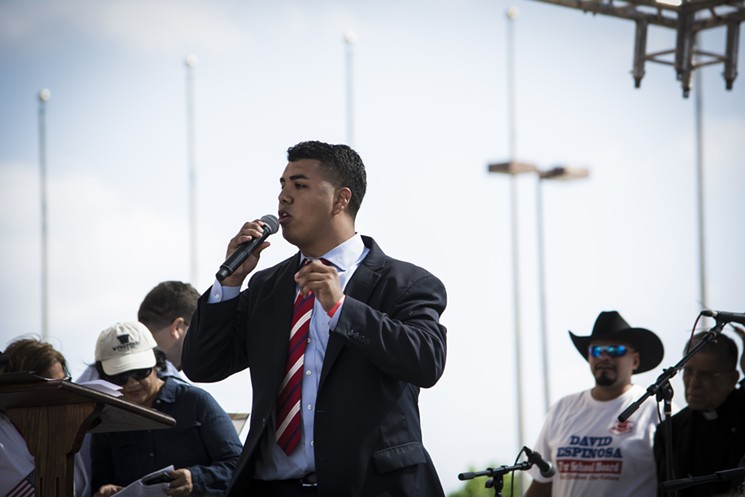 Sunday's march, which Gonzalez led with longtime Dallas activist Domingo Garcia, was about building a sense of community in Dallas. Included in that community this year was Dallas' new refugee population, which has come under intense scrutiny as Donald Trump's White House has tightened restrictions on incoming refugees and attempted to ban travel from several countries in the Middle East.

“We get out of Turkey with $40,” Ghufran Alrahal said about why she was marching. “We came here to reach our dream, to live a good life and achieve what we want.”

Mega March participants listen to the speeches on Sunday, April 9.
Elroy Johnson IV
Alrahal, who was born in Syria, came to the United States with her family three years ago. She's now a senior at Lake Highlands High School. Hala Halabi from Islamic Circle North America Relief Dallas, which helps refugees like Alrahal and her family, echoed Gonzalez' belief that Sunday's march was about creating visibility for vulnerable communities.

“People they don’t know, who are the refugees — my work is to show them this is the real people, this is the real refugees, there’s families, they’re like human being like you, they’re coming here to find a new life, to find safety, to find future for their kids," she said. 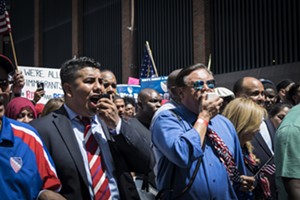 Gonzalez (left) and longtime Dallas activist Domingo Garcia (right) lead the march through downtown.
Elroy Johnson IV
Marching at the front of the pack with a bullhorn Sunday, Gonzalez wore a red, white and blue tie. Garcia, marching next to Gonzalez, sported garish American flag neck-wear. Both leaders were dressed in accordance with the guidelines given to marchers: wear red, white and blue and don't wave any flag that isn't the Stars and Stripes.

Marchers were also urged to forego making any mention of the president on Sunday.

"It's about the vision of the march being for ourselves, holding ourselves accountable," Gonzalez said. "The Latino community harbors subtle racism against each other. If you're a dark Mexican like me, you have lighter-skinned Hispanics who are racist against you. The call to action for this march is about education; we have to be able to think for ourselves."

Flanked by hundreds of DPD officers, who said Sunday afternoon that they made no arrests during the march, Gonzalez and Garcia led demonstrators from downtown Dallas Cathedral de Guadalupe to City Hall plaza. The group's chants were bilingual and positive, from the ubiquitous "Si, se puede," to the "people united will never be divided" chant that's become one of the favorites of anti-Trump protesters. 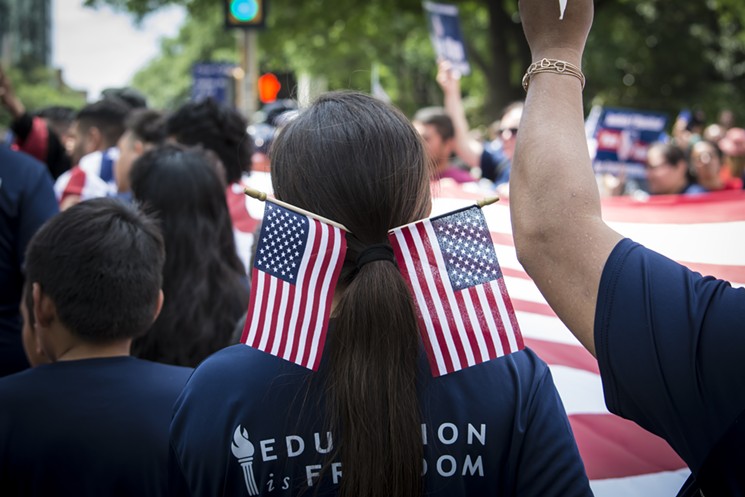 Flags adorn a girl's ponytail at the Mega March 2017.
Elroy Johnson IV
At City Hall, the march halted to hear from the featured speakers, led by Congressman Beto O'Rourke from El Paso, who announced a couple of weeks ago that he's challenging Ted Cruz in 2018, Congressman Joaquin Castro, who said Sunday that he'll decide whether to jump into 2018 with O'Rourke by the end of April, and Martin Luther King III.


"The Latino community harbors subtle racism against each other." — Adan Gonzalez

King, the oldest son of Martin Luther King Jr., said it was time for those in the crowd to lead a revolution of values. "We come here today to march against a national agenda that would turn back the clock on our nation’s great tradition of values, particularly toward the poor, toward our children and especially today toward our immigrants, people who come to our shore seeking a better life than the one they leave behind," he said.