U. Renee Hall (right) visited Dallas City Hall in July. Avi Adelman
On Thursday morning, Dallas police Chief U. Renee Hall completed the leadership reorganization she promised in October. Multiple deputy and assistant chiefs in the Dallas Police Department, including two finalists for DPD's top job, will be demoted to majors, among other changes. 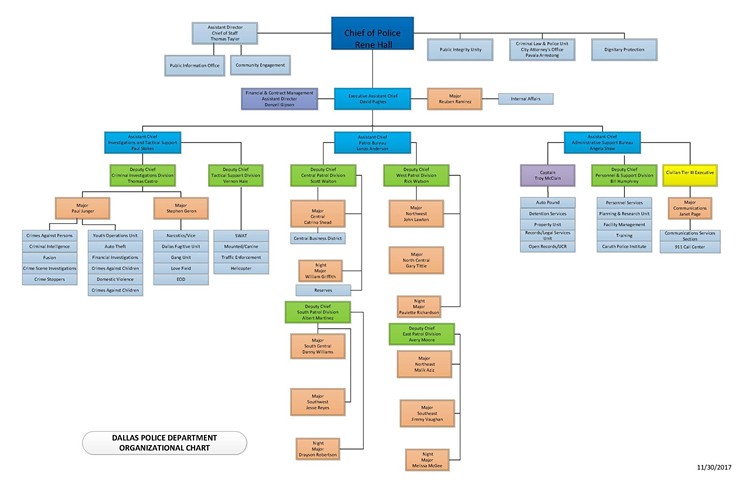 The Dallas Police Department's new command structure.
City of Dallas
Also included in the plan is a geographic realignment of Dallas' seven patrol divisions, which will be consolidated into four units, each overseen by a deputy chief and at least two majors — including a major assigned to nighttime duty. The new units are split up geographically into the central, south, west and east patrol divisions and will allow majors to spend more time in the field with their patrol officers, Hall said in a statement.

"Criminals don’t conform to our geographical enforcement boundaries, and we need a flexible structure to put officers where and when they are needed," Hall said. "That includes supervisors and command staff officers. I want the citizens of Dallas to see a much more engaged police force."

The two most prominent names among the demoted officers are Assistant Chief Gary Tittle and Deputy Chief Malik Aziz, both finalists for DPD's open chief slot last year. Under Hall's plan, both will be demoted to the rank of major. Tittle will oversee the North Central section of Deputy Chief Rick Watson's West Patrol Division, and Aziz will head the Northeast patrol unit under Deputy Chief Avery Moore, the new head of the East Patrol Division.

"The chain of command is significantly easier to understand, and I believe the structure is much more conducive to community policing and effective investigations," Kingston wrote on Facebook. "I also can't help but think about the many talented officers who just got demoted and whose pay will be cut. That's not Chief Hall's fault, but she was left with the uncomfortable job of unwinding the rat's nest org chart of the previous administration."