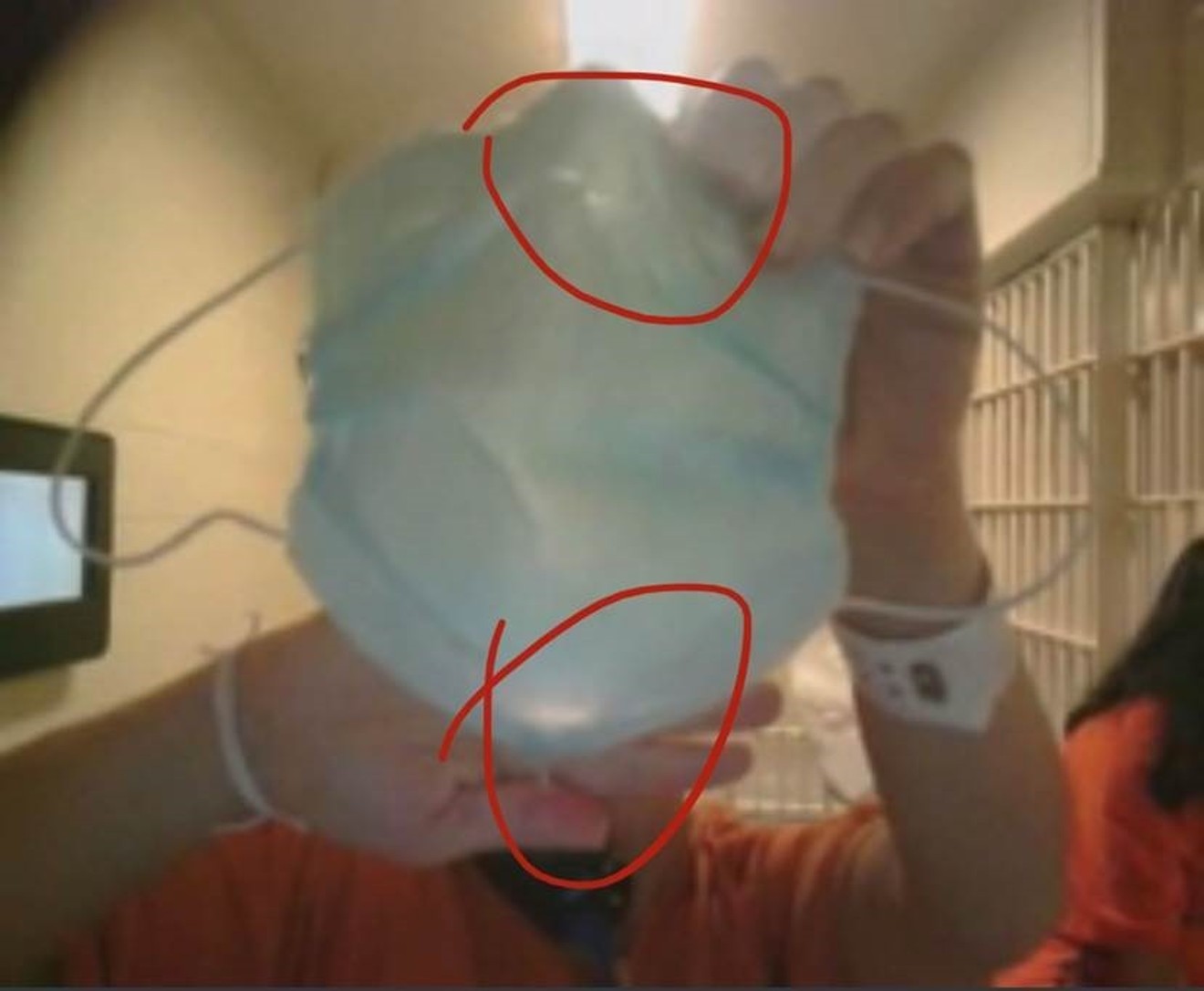 Denton County Jail inmates must reuse masks, many of which have holes, according to activist Jessica Luther Rummel. Jessica Luther Rummel
Black mold, raw sewage and neglected trash piles are plaguing inmates stuck in one of Denton County Jail’s so-called “quarantine pods,” according to a local activist and scholar. Coronavirus-infected inmates are also allegedly deprived of functioning masks; they often must reuse the ones they do have, some of which are filled with holes.

To Denton’s Jessica Luther Rummel, though, another issue is more alarming: Newly incarcerated women are forced to bunk with inmates who have tested positive for COVID-19. Many of those women have not yet been convicted of a crime, she said.

“No one should be sentenced to death in the Denton County Jail before they’ve ever seen a judge,” Luther Rummel said.

Luther Rummel said she was made aware of the living conditions after speaking with female inmates during a video conference call earlier this month. Luther Rummel also recently interviewed a former inmate on air during her KUZU 92.9 FM radio show.

Denton County Sheriff Tracy Murphree’s office did not respond to requests for comment.

After the Dallas Observer contacted the sheriff's office, Luther Rummel said she lost the ability to communicate with the jail’s inhabitants.

One inmate was held in the quarantine pod without having been diagnosed with COVID-19, and she has yet to see an attorney or judge, Luther Rummel said. The woman has since fallen ill, presumably from the coronavirus. 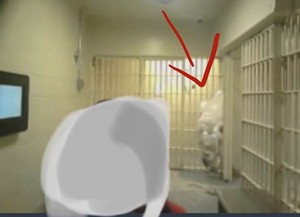 Even with the number of infections, sheriff's deputies are actively trying to make more arrests. Denton resident Emilee Singletary said that officers have knocked on her door to arrest her every day since late last week. She’s been at work each time.

In 2017, Singletary said she was issued a fine for a Class C misdemeanor that she had subsequently forgotten to pay. She’d been pulled over since then, but the officers didn’t even mention it, she said.

After the pandemic caused her to shutter her cookie delivery business, Singletary said she could no longer afford to pay the fine. Now, she may soon be jailed in one of the county’s quarantine pods, which is a terrifying prospect to her.

“With everything going on, especially with COVID being in the jail, it’s insane that they would want to bring somebody in for a $250 fine,” Singletary said. “I mean, why didn’t they come and get me three years ago?”

In March, Murphree announced that new inmates would be assigned to pods. There, they’d remain for 14 days after the date that the space became full.

Murphree said in a May interview with The Cross Timbers Gazette that newly infected inmates would then be isolated from those pods. He also said they’d receive medical care.


“I think it’s just a matter of time before someone dies in there." - Activist Jessica Luther Rummel

During her interviews with the jailed women, however, Luther Rummel said she learned that healthy women were forced to share a pod with sick inmates. That creates a vicious cycle in which inmates are continuously infecting one another, she said.

At the beginning of the pandemic, health experts believed that it was unlikely for a recovered patient to again become infected with the novel coronavirus. However, as The Washington Post reported Thursday, some doctors now think it’s a possibility.

Earlier this month, Murphree made headlines after he declared on social media that he would not enforce Gov. Greg Abbott’s statewide mask mandate in Denton County. Although some have celebrated the sheriff’s move, many residents are critical.

“You clearly don’t care about the health and well-being of your constituents, and you should resign,” one user commented on Murphree’s Facebook post.
click to enlarge 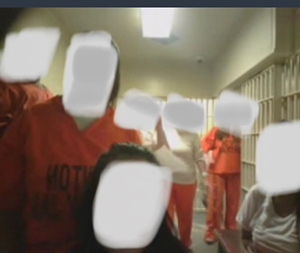 Luther Rummel said she's filing a petition with a district judge to have Murphree ousted from office for “failing to do his job.” She also started a GoFundMe page to finance court costs, which had raised nearly $6,900 of its $10,000 goal as of Thursday.

“I don’t think the man has the capacity to do this job,” Luther Rummel said of the county's sheriff. “He obviously cannot handle something this serious and this dangerous.”

Some of the women who shared a quarantine pod are considered high risk, Luther Rummel said. One young pregnant woman with co-morbidities was also part of the group; she has since been released on bail and is receiving medical attention.

Pregnant women are at a greater risk of hospitalization and at an increased risk of ICU admission than nonpregnant women, according to the Centers for Disease Control and Prevention.

The women are also not having their vitals checked or their fevers monitored, Luther Rummel said.

“I think it’s just a matter of time before someone dies in there,” she said. “They don’t get medications.”

Luther Rummel also said inmates are prohibited from going outside.

Meanwhile, Murphree’s measures have severely restricted the women’s access to their attorneys, Luther Rummel said. Other inmates are waiting to be released pending review, but in certain cases, that process has been delayed indefinitely, she said.

Some of those who are discharged are still infected with the virus, Luther Rummel added, which could contribute to community spread. Thursday, Denton County Public Health reported its highest daily COVID-19 case count yet. 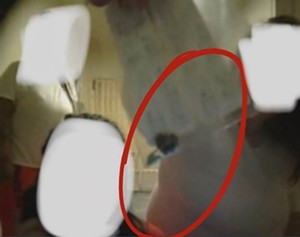 In a screenshot captured by activist Jessica Luther Rummel, a Denton County Jail inmate appears to hold up a patch of black mold that she scraped from her cell.
Jessica Luther Rummel
In addition, all of the inmates she spoke with were arrested for nonviolent offenses such as drug charges, Luther Rummel said.

“These are people who need help,” she said. “They don’t deserve to be sentenced to death.”

The predicament these women face illustrates systemic racism, Luther Rummel said. People in jail are disproportionately minorities who are unfairly targeted by the justice system, she said.

Luther Rummel is calling for the immediate release of all inmates awaiting trial for nonviolent offenses, and for those serving nonviolent convictions with fewer than six months left on their sentence. She’s also asking for the release of people who are in high-risk categories, and that inmates be allowed immediate access to their attorneys and parole review officers.

On top of that, Luther Rummel said coronavirus-positive inmates should receive daily monitoring of their vitals, such as temperature, pulse and oxygen level checks.

“These are human rights that we are talking about here,” she said.
KEEP THE DALLAS OBSERVER FREE... Since we started the Dallas Observer, it has been defined as the free, independent voice of Dallas, and we'd like to keep it that way. With local media under siege, it's more important than ever for us to rally support behind funding our local journalism. You can help by participating in our "I Support" program, allowing us to keep offering readers access to our incisive coverage of local news, food and culture with no paywalls.
Make a one-time donation today for as little as $1.