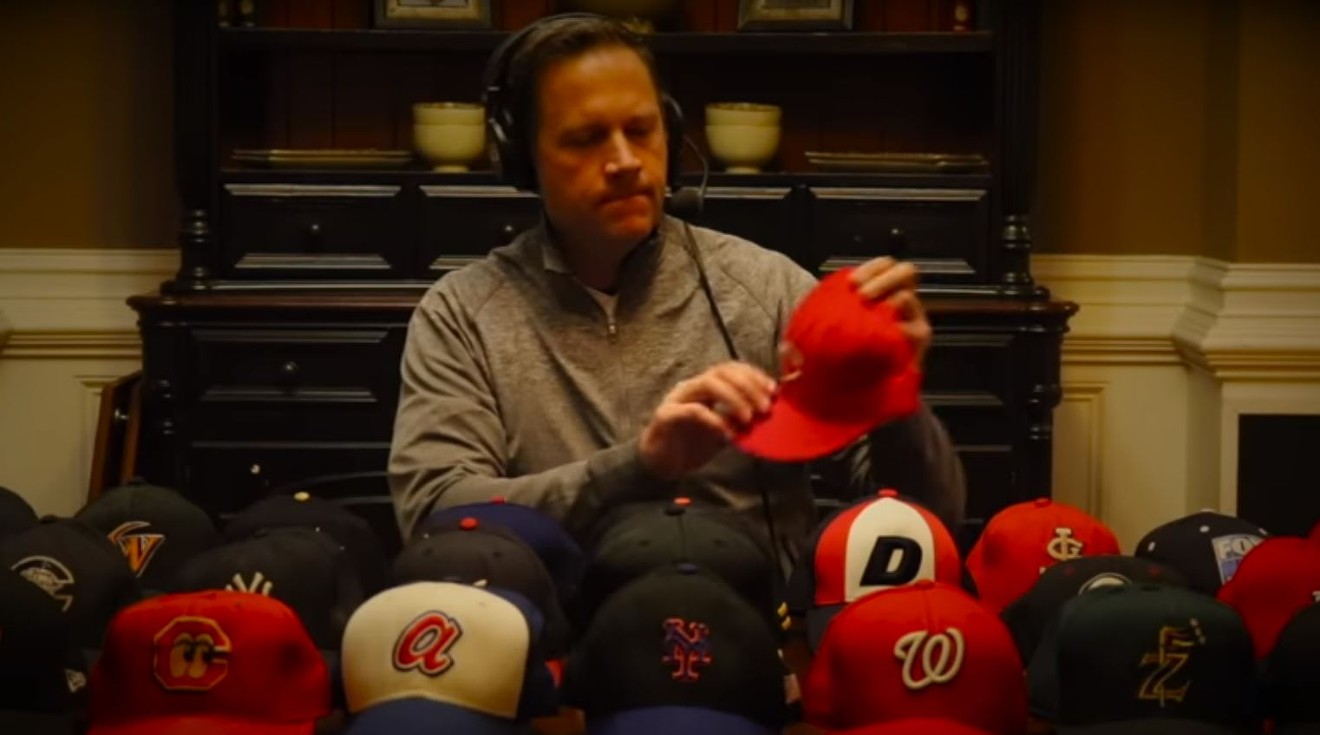 CJ Nitkowski/YouTube
(UPDATE, 2:57 p.m., Feb. 27: CJ Nitkowski emailed a statement Tuesday about sharing a tweet from the Proud Boys: “My intention was simply to like a tweet of a team photo of the gold medal-winning U.S. women’s hockey team. I did not know the group that posted the photo takes positions on some issues that are offensive to me and others. I don’t endorse the group and have unfollowed the account. I apologize for not being more careful on social media and in turn, if I offended some of my followers, especially Rangers fans.”

(UPDATE, 2:07 p.m., Feb. 26: John Blake, executive vice president of communications for the Rangers, responded with the following comment: "I have discussed this situation with CJ Nitkowski over the last few days. He told me he wasn’t aware of that reputation of that account and was just liking a photo of the women’s hockey team. He told me it was an honest mistake and he was not trying to offend anyone. I told him that the Rangers really expect him to be more careful on social media and he needs to take the necessary steps to make sure this happens. He assured me that he would do so.")

ORIGINAL STORY: Texas Rangers TV color analyst CJ Nitkowski caught a lot of flak on Twitter over the weekend after he liked a tweet from a group called the Proud Boys that included a photo of the U.S. women's Olympic hockey team.

The Southern Poverty Law Center has designated the Proud Boys, established by Vice Media co-founder Gavin McInnes, as a hate group. Its profile on SPLCenter.org reads, “The Proud Boys are self-described ‘western chauvinists’ who adamantly deny any connection to the racist ‘alt-right,’ insisting they are simply a fraternal group spreading an ‘anti-political correctness’ and ‘anti-white guilt’ agenda.”

Nitkowski's Twitter problem started when Twitter user Mike Taddow launched into a thread of tweets calling out Nitkowski. (Tweets have been edited and combined for clarity.)

“It’s high time I did this,” Taddow began. “@CJNitkowski is a problem. A quick glance through his twitter likes will show you that he’s a problem. We not talking about baseball or his chops as an analyst or broadcaster, and in due time, he’s going to be a problem for the @Rangers.”

Taddow then shared a screenshot of the tweet Nitkowski liked. It showed the U.S. women’s hockey team celebrating its first-place victory at the Pyeongchang Winter Olympics. In the picture, one of the players is making a circle hand sign with her thumb and forefinger together.

According to KnowYourMeme.com, the circle hand sign originates from the circle game.

“The game starts out when the offensive player creates a circle with their thumb and forefinger somewhere below his waist,” reads an explanation of the game. “The goal is to trick another person into looking at his hand. If the victim looks at the hand, he has lost the game, and is subsequently hit on the bicep with a closed fist, by the offensive player. Online, people have begun hiding hands making the circle symbols in various images to trick people into finding it.”

Some people on Twitter pointed out to Nitkowski that the sign has also become a symbol of the alt-right, as  TheOutline.com has reported, but the story here isn’t about what the hand sign represents.

The Proud Boys are known for sharing white nationalist memes. According to the SPLC, “They are known for  anti-Muslim and misogynistic rhetoric. Proud Boys have appeared alongside other hate groups at extremist gatherings like the 'Unite the Right' rally in Charlottesville. McInnes himself has ties to the racist right and has contributed to hate sites like VDare.com and American Renaissance, both of which publish the work of white supremacists and so-called ‘race realists.’”

Nitkowski doesn’t believe liking something tweeted by the Proud Boys is an issue.

"The insinuation that the sign the women’s hockey player flashed was anything but a game that athletes play is absurd." – CJ Nitkowski


“There is no tweet controversy,” Nitkowski told the Observer. “I didn’t tweet anything. There was nothing controversial about the picture that I liked. It was funny. The insinuation that the sign the women’s hockey player flashed was anything but a game that athletes play is absurd. I don’t thoroughly vet the [more than] 900 accounts that I follow, nor do I feel any of us are responsible to do so.

"I have never seen anything from that account that suggested they were a hate group. If I did, I wouldn’t follow them or any account. If a group wants to label a Twitter account a hate group, they can certainly do that, but their opinion means nothing to me. I think for myself. The idea that anyone would get upset over a tweet liked by someone they don’t know is now the most ludicrous thing Twitter has to offer us.”

In his thread, Taddow shared his thoughts.

“Here he is liking content from an alt-right group that doesn’t even have the balls to call themselves what they really are,” he wrote. “Reminder: We can love the team and enjoy baseball without having to turn a blind eye to a problem like him. It doesn’t have to be either-or. I, for one, demand better from the @Rangers.”


Several people engaged with Nitkowski on Friday night about whether he thought liking something tweeted by the Proud Boys was a problem. Nitkowski responded to most people and unfollowed several, including Taddow.

“I’m a black man, an immigrant to this country, and I love baseball,” Taddow told the Observer. "At a time when racists are feeling emboldened, seeing a member of the Rangers TV booth openly follow and like content from an alt-right Twitter account was the last straw for me. [Nitkowski] has always been problematic, at least to me, but this was too much. There’s no place for this kind of BS, and I don’t want it in baseball, a refuge for us from real world.”

Shortly after noon Monday, Nitkowski announced he would be temporarily stepping away from Twitter, tweeting out a statement to his more than 34,000 followers:

“Twitter can be a great tool for a broadcaster to connect with fans and network within the industry. I’ve used it to build relationships with many baseball fans with whom I have regular contact and the goal has always been to bring my experiences to enhance their view of the game. Unfortunately the openness and access you grant on Twitter can be hijacked by the angry lunatic fringe. I have little tolerance for their deceitful tactics while Twitter sits back and allows it. I know it’s just an awful few but they ruin it for everyone. I’m out for a while.”

The Rangers have not responded to requests for comment from the Observer.