A map of all the warning sirens you heard this weekend. City of Dallas
When sirens unnecessarily sounded across Dallas late Friday night and Saturday morning, one couple could have raged against the noise. Instead, Russell Shaw and Hadden McFadin made it part of their wedding story.

The City of Dallas just wanted to wish @hadden_mcfadin and I congrats on our wedding day with sirens. Thanks @CityOfDallas! #haddtobeshaw

City officials are blaming the blaring sirens on a hacker who managed to repeatedly activate the Dallas emergency system. The emergency system was down for about a day before being reactivated late Saturday evening. Mayor Mike Rawlings promised that “we will work to identify and prosecute those responsible.”

City officials say the FCC has been notified and will assist in the investigation.

Dallas authorities initially referred to the wailing sirens as a “malfunction” throughout the city as they began blaring just before midnight on Friday. By the next day, the city announced it was an intentional act:


@DallasOEM says it looks like a hack caused the #sirens to go off in #Dallas last night. Hacker(s) believed to be from Dallas area. pic.twitter.com/TVpx8Zvtem


The biggest complication during the security breach centered on the city’s 911 call system, which has had its own issues of dropped phone calls, independent of the incident over the weekend.

The city asked residents not to call 911 with questions about the sirens but still received more than 4,000 calls that night between 11:30 p.m. and 3:00 a.m., said city spokeswoman Sana Syed. This is more than twice the usual traffic during this time most nights.


Outside of these thousands of calls, Dallas residents took to social media with their curiosity, complaints and theories. Many fretted about the not-at-all-clear connection between the 911 call problems and this incident:

Knowing that our emergency sirens in Dallas were hacked makes me believe our 911 system has been as well. We need to get this fixed ASAP!!


The missile strike against Syria, and the reaction to them by Russia, had some reaching for some 1980s-style paranoia:


We all knew it wasn't a tornado. Buuuuut other options? #dallassirens pic.twitter.com/riLfDmLpMw


A hacked emergency system is a first for Dallas, but it happened before just outside of Chicago back in 2012 (though on a much smaller scale) when the emergency sirens of Lemont, Illinois, were all set off around 9:00 p.m. on a clear night. 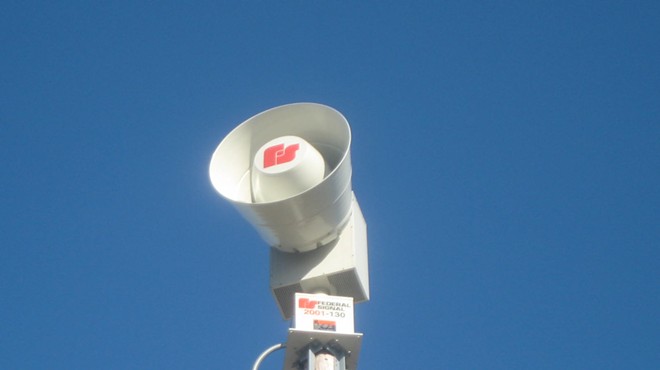 The City of Dallas and Mayor Mike Rawlings plan to upgrade the city’s security infrastructure, a proposal that will cost the city a lot of money but one that Rawlings says is "an imperative."


Outdoor warning siren system has been manually shut down. Looking into the cause for the unintended activation. Our Sincere apologies.


The Sirens Are Supposed to Go Off When...

...the National Weather Service issues a Severe Thunderstorm Warning with destructive winds in excess of 70 mph or a Tornado Warning for areas in and around the City of Dallas.

...reported hail of 1.25" in diameter or greater (1 inch may be more appropriate for areas or events where large numbers of people are outdoors).

...any other emergency situation as deemed by the Office of Emergency Management.