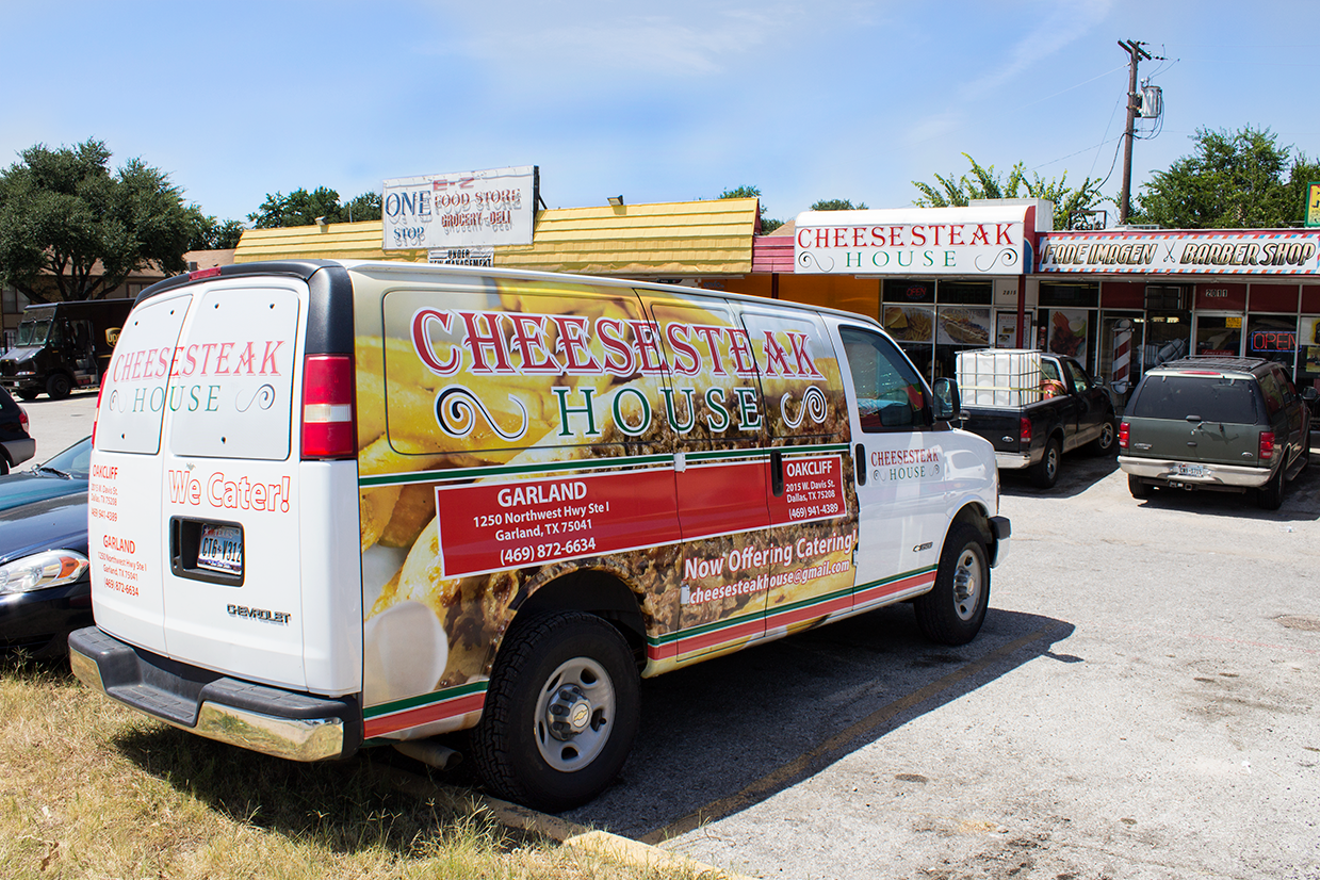 The original Cheesesteak House is located in Oak Cliff and is the home of the best cheesesteaks in Dallas. Tim Cox
In spring of 2014, in a small, unassuming retail strip on West Davis Street in Oak Cliff, Cheesesteak House opened with little ado. After hearing tales of its birth, I cruised west down Jefferson, my eyes peeled, not knowing exactly where it was. As I passed Mary Cliff Road, I saw what appeared to be a bed sheet flapping in the wind. Painted hastily across it: “Now open.”

“We were bootstrapping, and we went to some local printing shop to see how much a ‘now open’ sign would cost, and it was completely out of our budget. So, we sat around and thought of how we could make our sign, and my wife had the idea of just painting the sign on a bed sheet,” says owner Joel Padilla.

Padilla grew up in Los Azulitos, Jalisco, a small rural town in Mexico, and while cheesesteaks were an unknown delicacy in those parts, he quickly became a fan after relocating to Dallas in 1994.

“Growing up in a poor country town in Mexico, the only food I ever consumed was traditional Mexican food, which consisted of beans and rice and nopales — and if we were lucky we had a little bit of meat,” Padilla says. “When I arrived to the United States and I tasted all the new flavors a cheesesteak had, I was hooked.”

Last year, Cheesesteak House opened their second location, this time in Garland, and hopes to open another this year.
Tim Cox
The Padillas made their first foray into the restaurant world with El Paraiso, an authentic Mexican concept that was located in Farmers Branch. That restaurant never saw success, but the family took the restaurant’s closure in stride and turned it into a learning experience.

“I learned so much from that mistake,” Padilla says. “After that happened, I took a job as a waiter at Desperados Mexican restaurant and my wife made it a point to save up all our money to start another restaurant.”

Padilla’s wife and children came up with the idea for Cheesesteak House and the family’s restaurant dreams began anew, which brings us back to that spring day in 2014, back to that no-frills Davis strip-mall, and back to the bed sheet. When I was on my way to the restaurant that day, I didn’t really know what to expect, but — silly as it seems — that sign raised my expectations. If they’re not relying on flashy branding or mesmerizing marketing, I thought, the food has got to speak for itself, right? And that’s pretty much what Padilla was hoping for.

“We knew if we could just get people to try our food that word of mouth would do the rest,” he says.

Both Cheesesteak House locations are adorned with plenty of love for the home teams.
Tim Cox
The restaurant is set alongside a corner store, a barber shop and a head shop, the glass storefront backed by steel bars. As Padilla was driving around one day scouting locations, he noticed the empty spot and said the deal was too good to pass up.

“At first people kind of get scared of the bars on the windows,” Padilla says. “But then they walk in and see the bright colors and see the Dallas Cowboys and the Texas Rangers memorabilia things hanging and then they taste our food and they always come back.”

The sandwiches come in 8-inch or 12-inch versions and at $5.50 and $7.50 are a great deal. The bread is soft and has a chewy texture that melds well with the heaping amounts of slightly charred steak and onions. The cheese in the sandwiches is a blend of Swiss and American. That’s right Philadelphians: no provolone, and no Cheez Whiz. The cheese is melted into the meat in an almost homogeneous way, making it barely noticeable by sight, but it gets the job done in flavor. If house-made queso is more your thing, it’s available as a substitution.

That’s it for ingredients in the standard cheesesteak, however, there are other varieties on the menu for folks looking to spice things up a bit, such as the peppered cheesesteak, which features bell peppers, banana peppers and jalapeños.

Crank up the heat with a peppered cheesesteak.
Tim Cox
When the food arrives, you will be presented with three sauces: a banana-pepper infused ketchup known as Joel’s Special Sauce, a chipotle mayonnaise called Mayotle and a honey mustard blend.

The Mayotle is the most popular, Padilla says, and that’s not a surprise; it’s creamy, spicy, earthy and adds a great Texas flair to the sandwich. That said, after tasting all three, I’ve never gone back to anything other than the honey mustard blend. When I receive my sandwich, I will blast the entire thing with that fantastic, burnt yellow squeeze bottle, and I hit every bite with an additional squirt as I eat.

The menu features a range of non-cheesesteak items as well, from chicken wings to a burger to deli sandwiches, and although none of it is bad, the cheesesteak is what you’re here for. And while the signature sandwich is more than enough reason to come back, the hospitality here is definitely an added bonus. The restaurant is a family affair, and everyone working there seems invested and passionate about what they are doing. I’ve often seen Padilla manning the grill or taking orders at the register, but either way he finds time to make it around to every table, and his enthusiasm for his business and appreciation for his guests are apparent in every word he speaks.

The original cheesesteak sandwich at Cheesesteak House proves that a dish doesn’t have to be complex to be delicious.
Cheesesteak House
After two years of pumping out the best cheesesteaks in town, last summer Cheesesteak House opened their second location — this time in Garland, where the family lives — and they hope to open a third in 2017. When that new spot opens up, chances are you’ll see me there, slathering my cheesesteak in honey mustard, regardless of what the “now open” sign is made out of.