At Austin Import JuiceLand, You Can Add CBD Oil to Your Smoothie — But What Exactly Is It? The Originator (apple juice, banana, blueberry, cherry, peanut butter, brown rice protein, flax oil and spirulina) with an added $1 shot of CBD oil. Beth Rankin
As much as we all think we can bypass the seduction of a $6 peanut butter and flax oil smoothie, when you step inside Austin import JuiceLand, it’s pretty hard to stop yourself.

Maybe it’s the disco ball, maybe the free vintage video games tucked at the end of a bright green wall, maybe it’s the sheer knowledge that the kitchen in front of you is filled with vibrant fresh produce, but this juice bar is just ... happy. Cartoon vegetables and instant film photos of regulars are splashed on the walls, and the shelves are stocked with guilt-free snacks.

And then there’s the menu, a massive, towering list of fruits, vegetables and add-ins like matcha, spirulina and kelp. It’s not easy to make a decision, but at this cheerful place, we’ve yet to make a wrong one. On a recent visit, mulling over our options, we spotted an interesting option on the add-in menu: CBD oil.

In recent years, you’ve no doubt heard of CBD oil over and over, touted as everything from a handy sleep aid to a miracle cure for children with epilepsy. Marijuana contains two primary active molecules: THC, which gets you stoned, and CBD, or cannabidiol, which does not get you high. We’ve long been aware of certain medical benefits inherent in THC — like pain relief and increased appetite for cancer patients undergoing chemo — but cannabidiol “was thought to be biologically inactive in humans,” according to a recent story from the Cannabist, the marijuana-centric offshoot of the Denver Post. “But in the past 10 years, scientists have concluded that CBD may be quite useful. Dozens of studies have found evidence that the compound can treat epilepsy as well as a range of other illnesses, including anxiety, schizophrenia, heart disease and cancer.”

Despite years of evidence — both empirical and anecdotal — that medical-grade CBD oil is effective in mitigating issues related to epilepsy, it wasn’t made legal in Texas until 2015. Even though it is legal, medical-grade CBD oil is not what you’ll find on JuiceLand’s menu. (You won’t find many “miracle treatments” available as $1 add-ins at happy-go-lucky juice bars, but here’s hoping.) 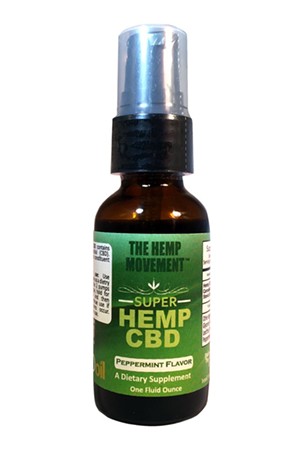 The CBD oil you’ll find on the menu at JuiceLand won’t get you high and it may not help anyone with epilepsy, but at $1 a shot, this legal supplement is a fun add-in to your smoothie.
Courtesy of The Hemp Movement

Though they’re two different things, believers swear that over-the-counter CBD oil can tackle some of the same issues as its medical-grade counterpart. The laundry list of health benefits from supplements are always best to take with a grain of salt, but Turner says CBD oil is popular with customers looking for help with inflammation, pain and anxiety issues. JuiceLand uses The Hemp Movement-brand CBD oil, a glycerin-based oil with one milligram of CBD “per two pumps,” according to the brand’s website.

And people are ordering it, Turner says. “People generally are just looking to try it out because they have heard of it elsewhere, or looking to try something new and like the sound of the benefits it offers,” she says.

After an evening yoga class at Sync in Sylvan Thirty, I popped down to JuiceLand and ordered the Originator smoothie (made with fruit, peanut butter, flax oil, brown rice protein and spirulina) and inquired about the CBD oil listed innocuously on the menu. The friendly youths behind the counter answered my litany of rapid-fire questions — What is it? Is it the same stuff we hear about on the news? Is this, like, legal? — with friendly knowledge, eventually adding my $1 shot to the drink free of charge so I could give it a try.

There didn’t seem to be any difference of flavor; it was fresh and filling like any other JuiceLand smoothie. An hour later, I was at home doing laundry when I found myself feeling particularly relaxed. Soon after, I fell into a deep, restful sleep, which is not common for me — it usually takes me up to an hour to fall asleep.

Whether that sense of chill was caused by CBD oil or my hour-long yoga class is up for debate — I don’t know the answer, and I didn’t really mind. But it’s a theory I intend to explore a little more, one smoothie at a time.