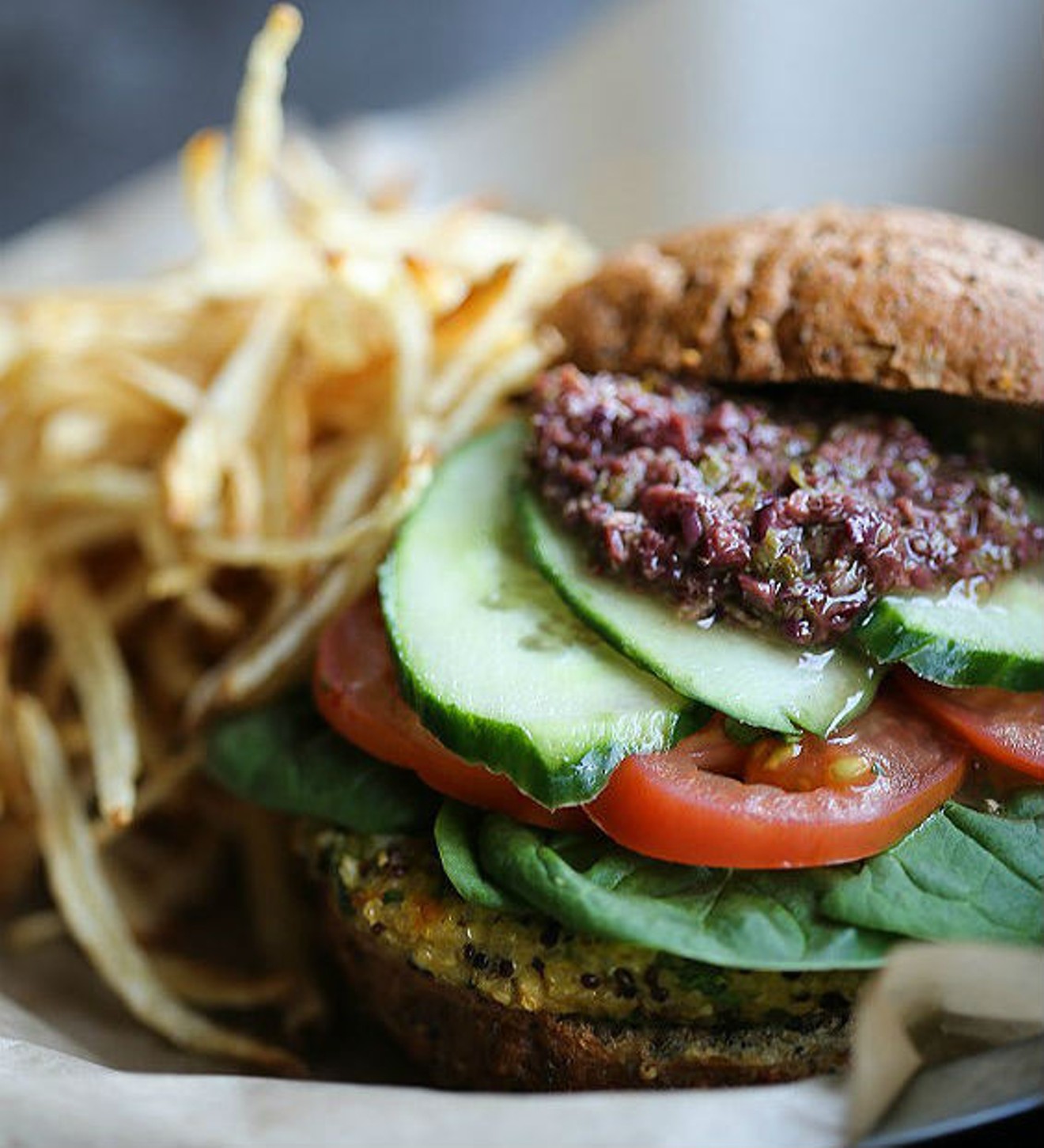 At HG Sply Co., as at a growing number of Dallas restaurants, vegans and omnivores can dine together in peace. Observer file photo

Dallas is home to a host of well-known and well-loved vegan restaurants, including Spiral Diner, El Palote Panaderia, V-Eats and Loving Hut. These restaurants are notable for their creative, comprehensive menus of exclusively vegan items.

A truly inclusive vegan city, however, has nonvegan restaurants with a variety of animal-free options that are denoted as such.

“Since I am married to an omnivore, it is best for us to dine at a restaurant that has both options, rather than a vegan-only place like Spiral Diner,” Dallas vegan Christine Beard says.

“I have been seeing a trend in menus becoming more helpful to those of us who prefer a more plant-based diet," she says. "The marking of menu items includes more vegetarian and allergen indications, but very few mark things as vegan." 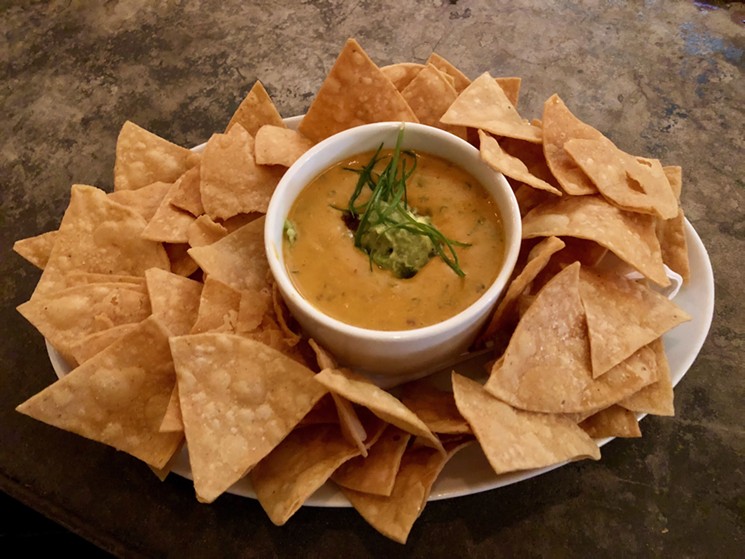 HG Sply Co.'s vegan queso is one of its most popular dishes, even among meat-eaters.
Paige Weaver
HG Sply
2008 Greenville Ave. (Lower Greenville)
It’s no surprise that diners find plenty of vegan items on HG Sply Co.'s menu. Animal-free offerings fit right in at HG, known for its simple, clean, health-focused food. The menu opens with a comforting ethos: "All menu items may be prepared gluten and dairy free." In addition to the possibility of modifying any dish, HG Sply has plenty of vegan options, including smoky carrot hummus, curried sweet potato soup, quinoa meatballs, zucchini pasta and a vegan breakfast plate. The vegan queso, made with cashews, is spicy and bright with a nice zing of citrus. Topped with a dollop of guacamole, this is a dip that would please even a dairy lover. While sitting at the bar, we overheard two to-go orders that included this dish — it's clearly a favorite. 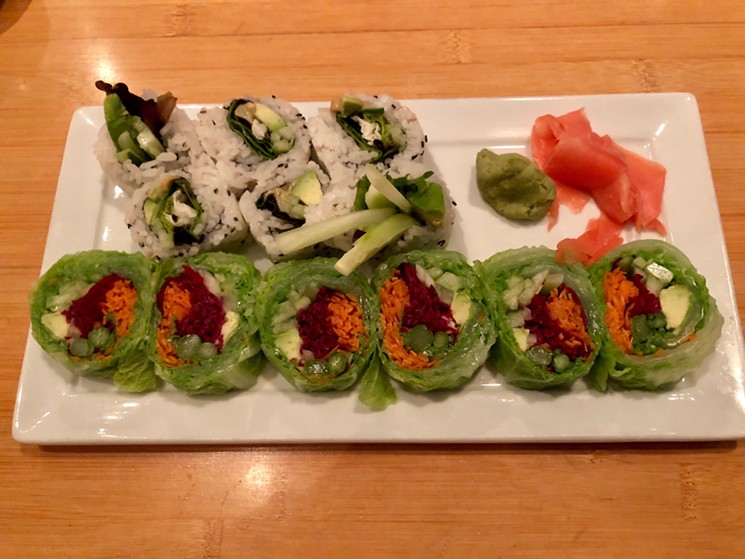 Zen Sushi's green dragon and lotus roll.
Paige Weaver
Zen Sushi
380 W. Seventh St. (Bishop Arts)
From tofu lettuce wraps to a spicy green dragon roll, Zen Sushi has a broad standalone vegetarian and vegan menu. What’s more, the staff is knowledgeable and confident about that menu and is able to describe each item in detail and make recommendations. The kanpyo carnitas steamed buns are an inventive vegan adaptation with savory, stewed calabash squash and crunchy cabbage slaw inside a fluffy bun. Of the sushi options, the lotus roll is visually vibrant, wrapped in lettuce and stuffed with crisp and refreshing beet, carrot, cucumber, asparagus and avocado. The beet xalapa roll is topped with thinly sliced lime, a surprising, piquant addition to the smoky sweet beet inside. 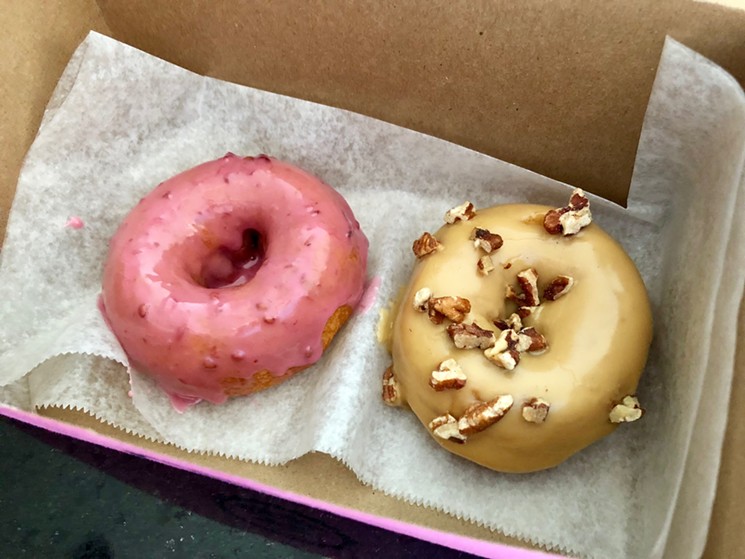 Blackberry moonshine and maple walnut doughnuts at vegan-friendly Glazed Donut Works.
Paige Weaver
Glazed Donut Works
2644 Elm St. (Deep Ellum)
Glazed Donut Works prides itself on making out-of-the-box doughnuts in small batches and with the finest ingredients available. This extends to the vegan options as well. There's at least one vegan flavor every day (or late at night, if you’re stopping there after hitting up Deep Ellum bars). On a recent visit, vegan blackberry moonshine and maple walnut doughnuts were on the menu. Both cake doughnuts, they are moist and fluffy, glossed with sticky, rich frosting. Other than the “vegan” notation on the menu, you wouldn’t know they're dairy free. Other vegan options that are sometimes available include chocolate, coconut, watermelon, raspberry and strawberry banana. Get there early, or you’ll be standing in line waiting to try one of these vegan delights. 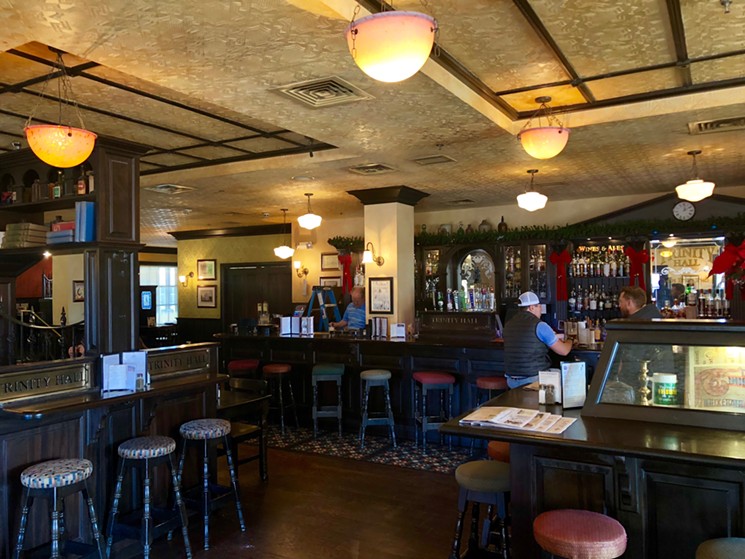 Post up at this Irish pub for cold beer and vegan menu offerings.
Paige Weaver
Trinity Hall
5321 E. Mockingbird Lane (Mockingbird Station)
You wouldn’t expect to find a such robust vegan menu at this traditional Irish pub. But at Trinity Hall, in addition to gluten-free selections, you’ll find extensive vegan options, including loaded potato skins, mulligatawny stew, a Reuben-esque sandwich and a chili-stuffed baked potato. The buffalo “chicken” strips are served with vegan ranch, and the shepherd’s pie is the perfect dish for a cold day. The majority of the offerings are typical pub fare veganized. That is to say, this isn't health food; these are vegan takes on comfort food. Additionally, Trinity Hall denotes which drinks are vegan, a rarity for nonvegan restaurants. Ciders, specifically, are often not vegan; they may have honey added or use a coloring derived from nonvegan products. 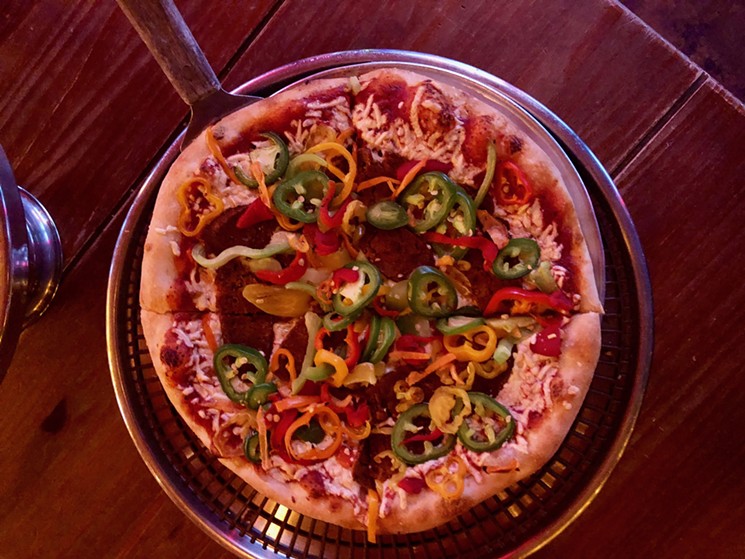 The Vegan Spicy Muchacho pizza at Pizza Lounge.
Paige Weaver
Pizza Lounge
841 Exposition Ave. (Expo Park)
Another restaurant that you wouldn’t think to visit for vegan fare, Pizza Lounge in Exposition Park, has a lot of fun with its vegan options. Home to some of the best pizza in Dallas, it expands an already fanciful menu with vegan pies such as the vegan Hawaiian, topped with sautéed Hawaiian "steak,” macadamia nuts, pineapple and Kona coffee. The Vegan Sofa King, Pizza Lounge’s take on a meat-lover's pizza, includes vegan “pepperoni,” Italian basil “sausage,” VegaBurger, “bacon” and heaps of veggies. All pies are generously sprinkled with Daiya mozzarella, a surprisingly melty vegan cheese alternative. Order a vegan pizza, and you'll even get dairy-free Parmesan. Pizza Lounge has thought of it all. 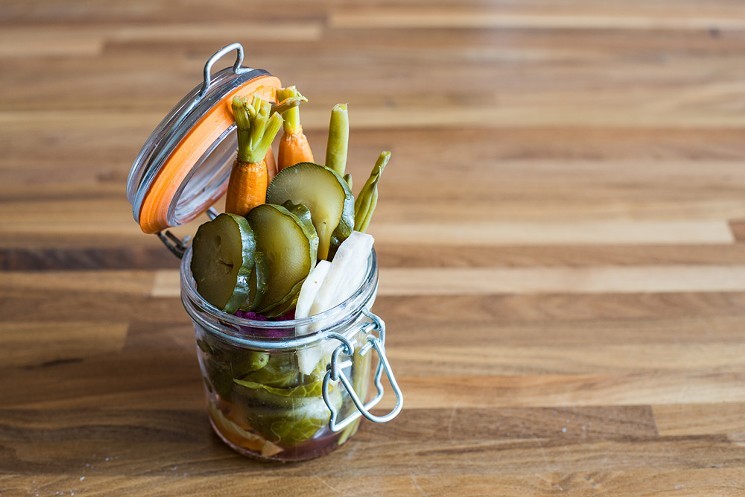 Pickles aren't the only vegan thing on Shoals' menu.
Melissa Hennings
Shoals
2614 Elm St. (Deep Ellum)
Surprised that a vinyl-centric classic cocktail bar in Deep Ellum has vegan options? Considering the small menu, it is a little surprising. But since owner Omar Yeefoon doesn't eat meat, he made sure that this tiny kitchen is putting out more than the greatest bologna sandwich in existence. The incredible empanadas come in vegan versions, as does just about everything, save for that bologna sandwich, and the jarred pickles are one of the greatest bar snacks in Deep Ellum right now. Shoals has even been playing with a perfectly messy chickpea salad sandwich. Grab a classic cocktail, listen to some soul music and chow down on animal-free bar eats.