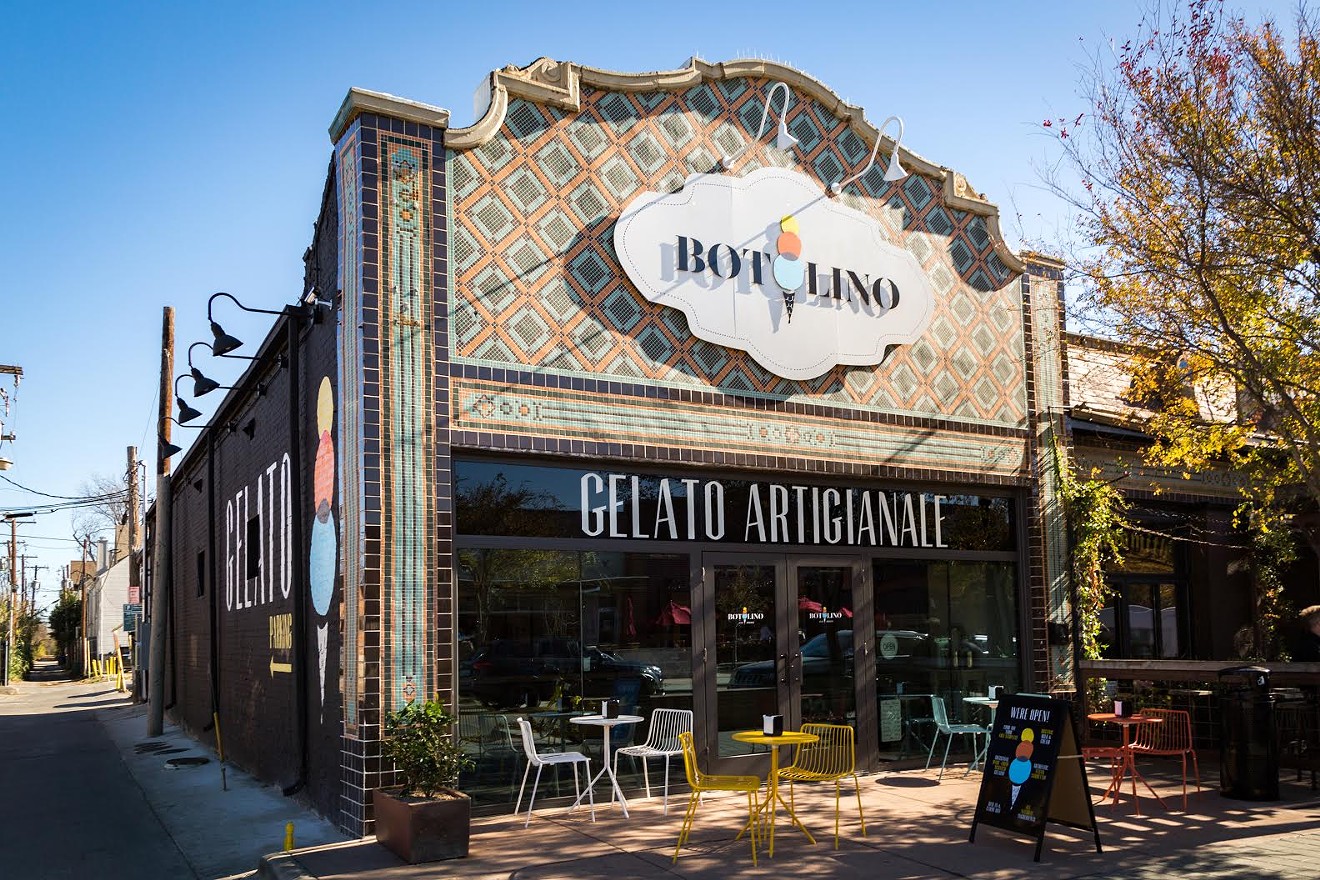 Owner Carlo Gattini grew up in Tuscany, in the Chianti Hills. He learned to make gelato from his grandmother, Fernanda Gosetti, who owned a gelato shop and wrote numerous cookbooks. When Gattini was 15, his family moved to Dallas, where his parents opened MoMo’s Italian Kitchen.

Gattini has dreamed of opening a gelato shop in Dallas for 15 years.

The shop is modern and open, with bright, whimsical murals painted on the interior walls. Two giant white and gold half-dome lights hang over the marble-fronted gelato case. Sit at the bar along the wall or in the front window. There is also seating outside.

Botolino Gelato's modern interior.
Courtesy of Botolino
Unlike most gelato shops, Botolino does not keep its product in glass display cases; it is stored in silver containers called pozzetti, or “little wells.” The pozzetti keep the gelato at a stable temperature and away from light.

At Botolino, quality is king.

“We make everything from scratch, from basic, raw ingredients,” Gattini says. “We don’t use pastes or powders, like most gelaterias do in the United States. We try to source ingredients locally, and we’re building relationships with local suppliers, like Texas Honeybee Guild and Noble Coyote Coffee Roasters.”

You pay for that quality. A kid’s cup (up to two flavors) is $4.85, a regular cup (up to three flavors) is $6.75 and a Texas cup (up to four flavors) is $8.25. You can also order small, medium and large cones. Employees are generous with samples before you make your final flavor decision.

A kids'-sized gianduia (chocolate) and white coffee gelato, $4.85.
Paige Weaver
Botolino's flavors include mango, berries and lavender, hazelnut, white coffee and crema, made with Madagascar bourbon vanilla beans. All of the sorbettos are dairy-free. Gattini’s favorite flavor is the chocolate sorbetto, which is made with Valrhona cocoa.

Gattini says there are many more flavors to come. He loves taking suggestions from clients, and some of the most popular flavors, like sesame, matcha and olive oil, have come from requests.

In addition to gelato, Botolino offers four types of cakes.

“The appeal of the cakes is that I’m able to present the diner with a complete dessert. I’m able to take them through a whole flavor experience,” Gattini says.

To keep the gelato at a stable temperature, it's stored in silver containers called pozzetti, or “little wells.”
Paige Weaver
Gattini says that reception to Botolino has been warm.

“I thought Dallas might not be ready for real gelato, made from scratch," he says. "I was concerned that people might be so used to artificial flavors, they would not recognize natural flavors as being better. I was completely wrong.”