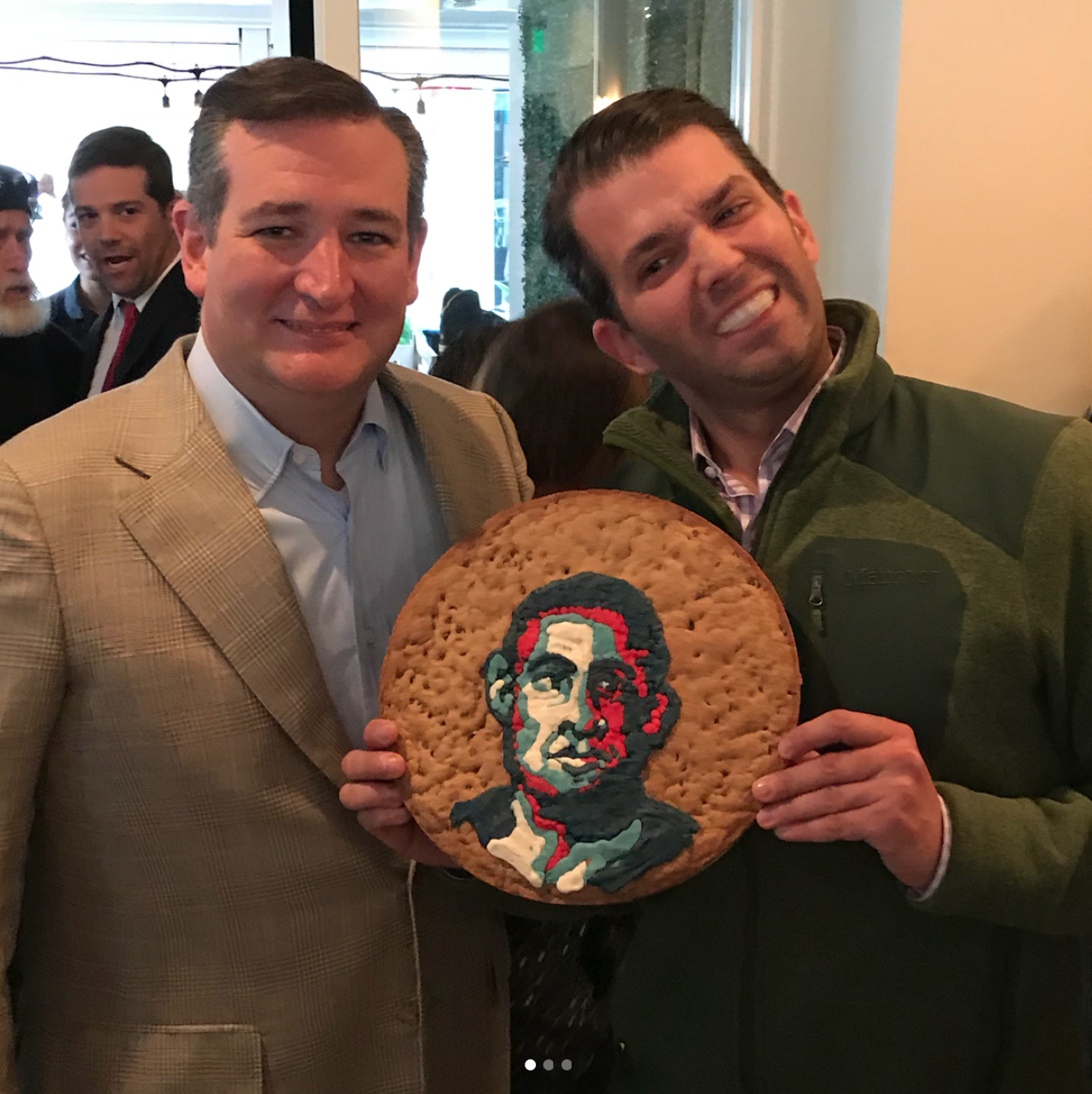 Donald Trump Jr. posted this photo — taken at Dallas restaurant Le Bilboquet — of him posing with Sen. Ted Cruz and a cookie cake depicting former President Barack Obama. Screencap via Instagram
Donald Trump Jr. posted two photos to Instagram on Sunday from events he attended in Dallas this weekend. One is a picture of a cowboy boot-shaped cake celebrating "a great friend's 40th birthday," Trump Jr. wrote on Instagram. The location on that post was listed as Dallas, Texas. But it's Trump Jr.'s second Dallas post — tagged at Le Bilboquet, a French restaurant near Highland Park — that's drawing a lot of attention today.

In the photo, Trump Jr. and Sen. Ted Cruz pose with a cookie cake decorated with a distorted portrait of President Barack Obama that appears to be based on campaign posters designed by artist Shepard Fairey.

"With friends like these... some good friends decided that while my birthday is not for 2 weeks that they would get me an early 40th birthday cake," Trump Jr. wrote on Instagram. "And what birthday is complete without an Obama cake? I figured it was so good that I would have to share it with Ted." A screencap of Trump Jr.'s Instagram post at Le Bilboquet.
Screencap via Instagram
Social media response to the post has been polarized, as can be expected. Many users have voiced support for Trump Jr. and the cake; others chided Cruz and Trump Jr. for posing with a cake that some see as disrespectful. Some users, especially in Dallas, have called for a boycott of Le Bilboquet.

In a Facebook post this morning, Le Bilboquet owner Stephan Courseau confirmed Trump Jr.'s visit to the restaurant and expressed dismay over what has inevitably become a social media firestorm.

"Let me be clear, I share your indignation without any reservation," Courseau wrote. "Both Donald Trump Jr. and Ted Cruz were attending a birthday celebration of one of our regular patrons who rented out our venue for a private event. The party was not for either one of them nor was it any kind of partisan rally.

"Someone that attended the party brought in an outside cake for Donald Trump Jr.’s upcoming birthday and we are not sure who that was. Both Donald Trump Jr. and Ted Cruz took pictures with the cake and posted on social media outlets.

"We at Le Bilboquet feel betrayed and sad. Restaurant business is about creating a hospitable environment for all, a non-partisan, non-politicized, nondiscriminatory and respectful environment. The fact that guests decided to use our restaurant as a platform to promote, disrespect, and spread hatred goes against everything we stand for."

Courseau goes on to note that he is French and his wife is Mexican.

"We both believe in universal values of love, respect and tolerance," Courseau wrote. "Values that we have found within the Dallas community. Our friends and patrons represent a wide spectrum of American beliefs including: Republicans, Democrats, and Independents. What brings them together is the same belief that we can live together with love, respect and tolerance. I made America my home a long time ago because of these values that embody the real American dream.

"I am truly sorry that such distasteful events happened at our venue and that these circumstances brought me to write this statement today. It reminds us that a divide still exists and that we have to keep promoting our core values, so that events like these don't happen again. While I am disappointed and hurt, I still think it is possible."

Meanwhile, national media outlets such as Time and Newsweek have picked up the story, putting Le Bilboquet at the center of the bizarre cookie cake controversy. Nylon focuses on another aspect of the story: "Donald Trump Jr. Doesn’t Know The Difference Between a Cake and a Cookie."