According to Texas Monthly, DFW Has 10 of the Top 50 Barbecue Joints in Texas 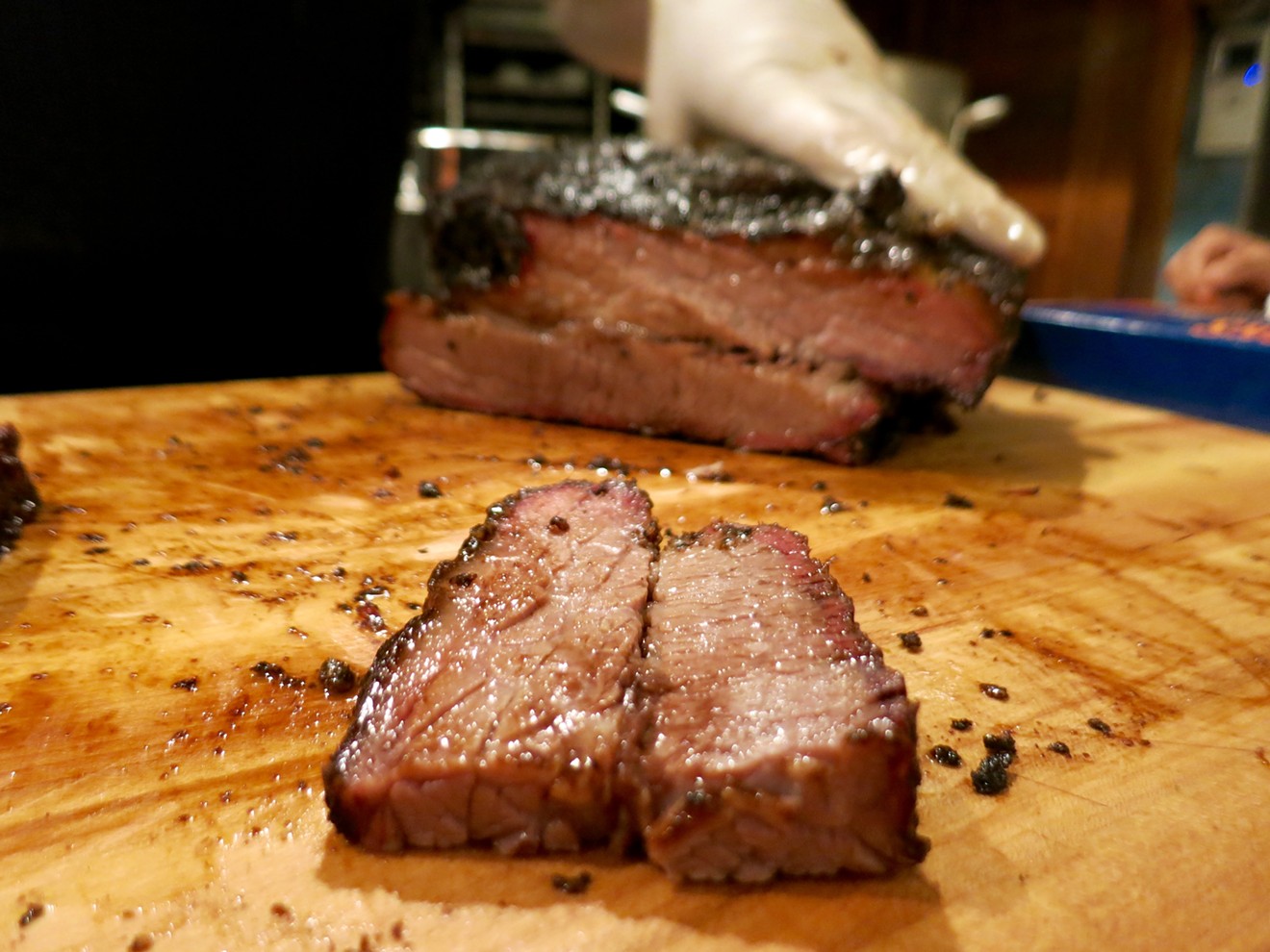 Mouthgasm giving brisket, courtesy of Hutchins BBQ. Cody Neathery
Daniel Vaughn and his incredible team of barbecue cohorts have finished scouring the state for the best barbecue in the land, and this week, they published the latest iteration of Texas Monthly's list of the top 50 barbecue joints in Texas. No longer worried about barbecue peaking, Vaughn declares that we have nowhere to go but up, as we're "living in a golden age of barbecue."

There are a few changes to this go-around of the Top 50; only the top 10 are ranked. The remainder of the Top 50 are sorted by city, although each joint still earns a score on a 1-to-5 scale. Snow's Barbecue in Lexington is the only joint to earn a perfect 5 rating; the rest of the Top 10 notched 4.75 marks.

Anytime there's a list, there's ample internet hem-hawing, hand-washing and profanity-laden disagreement. Vaughn and his team encourage and respond to feedback, even when it gets ugly. This isn't elementary school field day; there are winners, there are losers and opinions (and tempers) run high. Never ones to shy away of sharing our opinion, we've had time to review the list, particularly how DFW barbecue measures up, and feel obliged to chime in.

The surprise
The last Texas Monthly BBQ Top 50 had Dallas' Pecan Lodge ranked as the second-best barbecue in the state, behind Franklin's Barbecue in Austin. It was Dallas' only entry in the top 10, but that was 2013. Then, Pecan Lodge was just a single-smoker operation in the farmers market, Lockhart had yet to expand into Plano and Cattleack was just getting started in North Dallas. Spots like Slow Bone and Heim weren't even open.

For 2017, Dallas again has a lone representative, but it's not you-know-who. Pecan Lodge earned a 4.75 score in the last go-around, but slipped to 4.25 this time. It's still in the Top 50, but it's outside of the Top 10. Has Pecan Lodge really fallen that far?  Perhaps not as much as you'd think — just ask our readers, who continually vote Pecan Lodge as their Best of Dallas winner in the barbecue category. But the line between great and truly sublime barbecue is thinner than a well-executed smoke ring, and maintaining greatness is a tough task.

The new king
Cattleack Barbecue now carries the crown of the city's best barbecue. There's no complaint from us; we've loved the work Todd and Misty David have done in their small barbecue alcove from the start. We've watched as a tiny shop with barely a table and an ordering counter grew into a slightly bigger restaurant with five tables and then into a decently sized establishment that comes closer to seating the demand. Plus, with more space (and more smokers), Cattleack added an extra day to the operation, opening the first Saturday of each month in addition to its weekly Thursday and Friday hours.

This recognition is no beauty contest, however; Cattleack's smoked meats stand taller than almost any in the state. To be mentioned in the same breath as standbys such as Snow's, Franklin's and Louie Mueller's is no small feat, and Cattleack has earned every bit of smoky praise heaped on it. 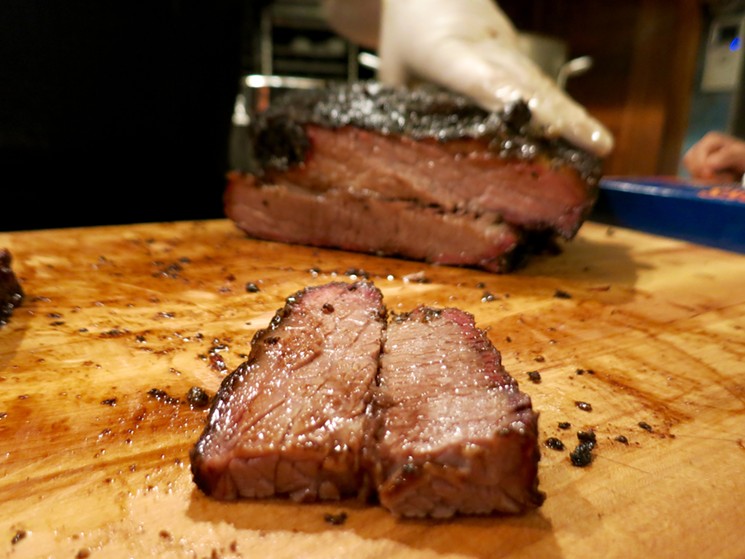 Mouthgasm giving brisket, courtesy of Hutchins BBQ.
Cody Neathery
Who else?
Vaughn and his team note that barbecue seems to be leaving rural areas and growing in the big cities; Houston counts four spots among the Top 50, and Austin has seven. Before you think Dallas is slacking with just one spot, we think that gives short shrift to the rest of the area. Using all of DFW as wider geographic criteria, we can boast 10 spots in the top 50. Hell yeah, DFW.

To use the Texas Monthly rankings, the next best thing in DFW barbecue is Hutchins BBQ in McKinney, which earned a 4.5 rating. We're also on board with this choice; in fact, it was a tough decision between Hutchins and Cattleack when we made our Best of Dallas decisions last year. We finally gave Hutchins the nod; at the time, it was riding high after cooking dinner for the James Beard House in New York City.

Aside from Pecan Lodge, we're pleased to see a couple of our local favorites get some Top 50 love. Lockhart's continues to crank out solid 'cue in both Bishop Arts and Plano. We'd also be remiss if we didn't mention that Lockhart's Plano location offers occasional smoking classes for those who wish to learn pit-master secrets for their next backyard cookout. We were also happy to see BBQ on the Brazos in Cresson get recognized; we've said before that it's worth the drive from Dallas, and a recent visit last year confirmed that John Sanford's barbecue is still top notch.

Finally, Heim Barbecue landed in the Top 50 as well, although if scoring was done on bacon burnt ends, there's no way it wouldn't finish first. In a relatively short amount of time, Travis and Emma Heim have gone from nothing to food truck to a happening place in Fort Worth with a second location in the works.

And lastly, Texas Monthly has pointed out some gems in our backyard that definitely warrant further investigation. Flores Barbecue in Whitney, Top 5 BBQ in DeSoto, 4-T's Bar-B-Q in Forney and Harris Bar-B-Cue in Waxahachie all earned Top 50 honors. We can't shy away from good barbecue just because it's not in our neighborhood, so you can be sure that we're putting these places on our list to try sooner rather than later.