And Downtown Dallas Drinkers Rejoiced: City Tavern Is Back Downtown's favorite watering hole is back in business in a new location on Elm Street. Beth Rankin
For people who live and work in downtown Dallas, City Tavern was the ideal neighborhood bar. After City Tavern opened in 2004, its cheap drinks, no-frills bar food and cozy dive bar ambiance made it the neighborhood's favorite hang spot, a real-life Cheers where bartenders set your usual on the bar before you'd had time to take off your coat.

And then, on Labor Day weekend in 2018, City Tavern closed.

"Our landlord, Adam Salazar, owner of On Premise and The Mitchell next door to the Main Street location, wanted to take the space for his own concept," says City Tavern owner Joshua Florence, who also owns Deep Ellum favorites Off the Record, Independent Bar & Kitchen and Club Dada. "It was bittersweet, considering it wasn't really our choice to leave. It was a little sad to leave a location where so many memories had been made, but from an operational point of view, it was a very old, dilapidated space that needed a serious amount of love." 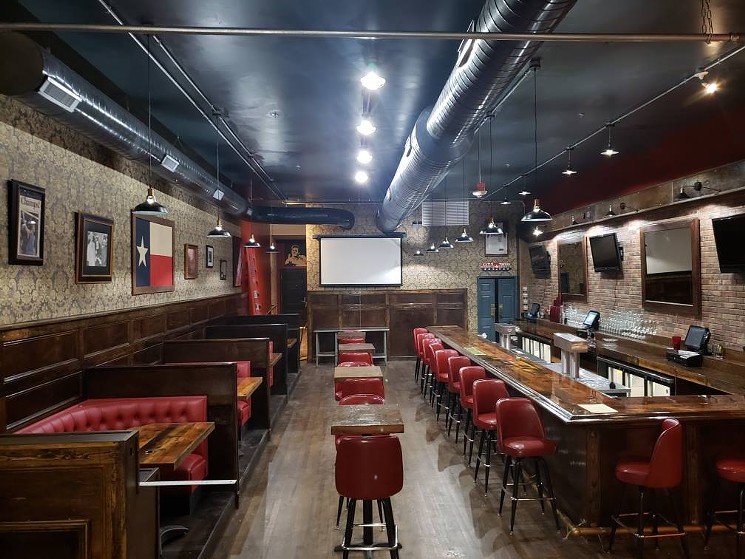 City Tavern 2.0 looks — and feels — a lot like City Tavern 1.0.
Courtesy Joshua Florence
Anyone who'd been to City Tavern's Main Street location can attest to that — over the years, the bar increasingly felt like a dive but less intentionally so, down to the small, beat-up bathrooms. Not wanting to give up the neighborhood it called home, Florence found a new space for City Tavern just a block away on Elm Street.

"We have such a wonderful customer base that have become family over the years — our No. 1 goal was to find something close to the OG location," Florence says. "From there, we wanted to make sure it was something we could afford. It's not easy paying downtown Dallas rent prices selling $4 beers and $8 burgers. Thankfully, 1514 (Elm St.) was available, something we could afford, on the same timeline we were on and about only half a block away from the old location. That was an answered prayer."

Last week, City Tavern 2.0 opened its doors. It feels a lot like the old location, down to the shotgun layout and cozy, old-school red leather booths.

Pull up a stool by the front window and watch the city stroll by.
Beth Rankin
"The new location is basically the exact size of the downstairs space of the old location," Florence says. "We don't have an upstairs at the new location, which is totally fine. We did most of our business downstairs at the old location anyways. It's sort of like Bizarro City Tavern — same staff, same menu for the most part, same wonderful customers, same size space, same layout, very similar design style, but a different building."


"City Tavern is a special place, and we're all very excited about this next chapter." — Joshua Florence

Sweetening the deal, City Tavern 2.0 went from single-stall bathrooms to spacious new restrooms with multiple stalls and far shorter lines. The old City Tavern used upstairs for live music; now, everything is contained to a single room. The popular smoker's patio out front is gone, but the seats along the front window offer a comfortable place to sit and watch the city go by. The only downside we found to the new location is the sound — even before it got packed, it got pretty loud in there.

For those who loved City Tavern's no-frills food, the new menu (check out a PDF below) is a trip down memory lane, with the same barbacoa nachos ($12), double cheeseburger ($12; $6 on Fridays from 11 a.m. to 5 p.m.) and all day/all night breakfast offerings. You'll also find a few new beer options, including locally brewed beers from Oak Cliff Brewing Co.

"We brought back some customer favorite menu items — like homemade jalapeno poppers — and added a few new items, Bill's Footlong Dirty Dog being one," Florence says. A plate of oh-so perfect barbacoa nachos, $12.
Beth Rankin
In a city as expensive as Dallas, City Tavern is refreshingly inexpensive. Friday's happy hour (4-7 p.m.) is particularly enticing, with $4 domestics and wells. We sipped two perfect, spicy Bloody Marys that set us back only $8 and certainly helped the transition from workday to weekend. On its second day back in business, City Tavern 2.0 was already packed with regulars by 5:30 p.m. You could easily spot the old-timers by their Dirty Dustys, City Tavern's famous $7 duo of Pabst Blue Ribbon and a shot of Jack Daniel's.

"The beauty of City Tavern has always been the community of customers and staff that are like family," Florence says. "When we quietly opened last week, it was very apparent that they were all very happy to have their little City Tavern back. It was heartwarming and a little overwhelming to see everyone turn out.

"City Tavern is a special place," Florence says, "and we're all very excited about this next chapter."