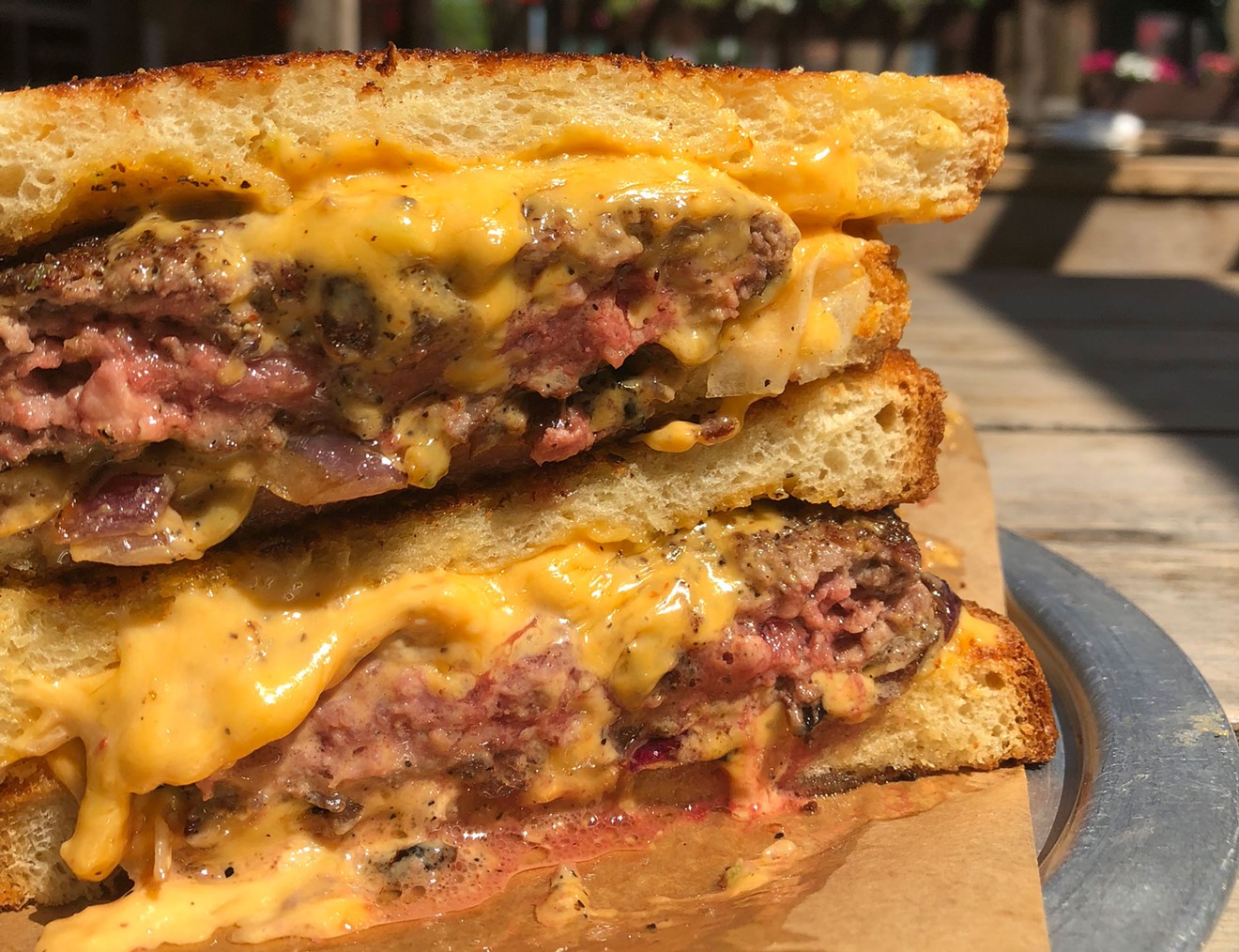 One of the new items on the menu now at Goodfriend in White Rock: a patty melt with pimento cheese. David Pena
It begins — as it should at your local bar — with cold beer. About seven years ago, the idea of what food would be served out of the White Rock kitchen was a question mark on a whiteboard. Whiskey and cheeseburgers, and the runners who would hustle the burgers out of the kitchen, would occur later. So Goodfriend Beer Garden started with the idea of beer and a few bartenders and waitresses to hand it to you.

“We didn’t know what the fuck food we were going to do,” says co-owner Matt Tobin with a laugh from deep in his gut.

It doesn’t matter how loose the definition of “gastropub” is — Goodfriend was never a gastropub. It’s not one now, and it’s easily the worst thing you could call the joint. For owners Josh Yingling and Tobin, calling their neighborhood bar a “gastropub” is far worse than, say, a sprawling, grammar-challenged one-star review on Yelp.

“Do you think the word gastropub comes off a little pretentious?” Yingling asks. He’s got a cold, amber-as-sunshine beer in front of him. Tobin leans forward, diving into a lamb gyro. “We’re just a neighborhood bar. It’s beers and burgers and whiskey. Why so serious?” Yingling asks.

“If you’re going to call yourself a gastropub, your food better be unbelievable," Tobin adds. "I don’t like the term."

It wasn’t long after Goodfriend opened that chef David Peña became a regular. Over at Goodfriend Package, Yingling and Tobin’s sister on-the-go sandwich spot across the street, Peña would take a merciful break from work and share a cup of coffee with his wife in the morning. It was their time together before rocket-launching into their busy days.

Peña knew Yingling and Tobin’s food — the towering waffle fries, piled like your personal burial mound layered with yellow cheese. Peña knew Goodfriend’s P.L.O.T., a simple, lettuce, tomato and onion cheeseburger that has never let regulars down. Goodfriend’s portions were often absurd — eating at the bar before 2018 was like becoming a king for a day. Ranch and carbs showered down from the heavens.

So when Peña — who worked previously at Braindead Brewing — took over Goodfriend’s kitchen recently, the portions were the first thing to update.

“I’ve been coming here since it opened,” Peña says. “The first thing was portions. They were massive. There was a lot of stuff going in the trash. I love utilizing everything I can. I utilize every bit, every scrap of the animal.”

Yingling shares a story about filling up on a trio of dips and chips at his bar.

“I want you to walk out of here full and happy," he says. "But I also don’t want to feed you for two more days after that. That just doesn’t make any sense.”

The shaved lamb gyro is a throwback to the chef's days of eating at the Vista Ridge Mall.
David Pena
There was more to do. The menu needed a spit-shine.

“We were without a chef for three weeks,” Yingling says.

“But we needed to be without our chef for way longer than that," Tobin interjects. "It was time.”

One dish, for example, was a chicken sandwich called the Birdwell. It came stuffed with cream cheese and arugula on a baguette, like something you’d whip together at 3 a.m. the night before you move out of your apartment.

“That goddamn Birdwell sandwich. I’m sorry,” Peña says with a touch of sharpness. “It was shitty chicken, chicken breast in an inappropriate brine, straight cream cheese on a baguette. And undressed arugula.”

Goodfriend Beer Garden & Burger Bar helped transform the intersection of Peavy and Garland roads in East Dallas into an up-and-coming neighborhood for local, independent food and drink businesses.
Observer file photo
So the Birdwell got sent back to the minors. Peña swapped it for an herb-brined sandwich with a bed of smoked provolone and pesto. Ranch dressing got an upgrade, too: Piles of electric-green celery and thyme frequently found their way into the leftover pile, so chef Peña eased both into a new dip.

“Instead of throwing it in the trash, I used it for a badass ranch dressing,” he says.

The state of the gastropub, a concept constantly rolled out by restaurant groups, is growing stale as a breadstick. In these turbulent times, when the news of the day goes down like a shot of hair conditioner, the last thing our bars should do is tweezer our food. The neighborhood bar, the dive, the holy church of introverted drinking and neat glasses of whiskey is a golden light at the end of the road. We need our neighborhood bars to stay whole in the heavy winds; we need them to hold fast and true to the ground. We require patty melts and dark beer.

Peña's new melt, which is on the menu now, is topped with molten pimento cheese, sparking with serrano peppers and challah bread that's been brushed with salted, clarified garlic butter. He’s testing a few new burgers. One’s got queso, chili, house-pickled jalapeños and — wait for it — Flamin’ Hot Cheetos. Another burger idea is a somber take: The Bourdain Bourguignon has, in its test phase, wine-stewed brisket and a fried egg. It’s dedicated, of course, to the late Anthony Bourdain.

With all the changes to the menu, Tobin reassures that Goodfriend is still Goodfriend.

“Whenever we roll out his menu, it definitely will be his menu," he says. "And some of the things will go. But we’ll still have the ability to make them. For the guy who’s been coming here since opening: Yeah dude. No worries. We got you. It’s all good.”

“The neighborhood made this place,” Yingling says.

Peña's upgraded menu will roll out in a week or two, give or take. What else do we need from our neighborhood joints? A little nostalgia goes a long way. As a kid in Dallas, Peña found himself at the Vista Ridge Mall, a gyro in one hand and the controls to a video game in the other. The gyro is on the menu now, unapologetically inspired by those days.

Goodfriend, 1154 Peavy Road (East Dallas)
KEEP THE DALLAS OBSERVER FREE... Since we started the Dallas Observer, it has been defined as the free, independent voice of Dallas, and we'd like to keep it that way. With local media under siege, it's more important than ever for us to rally support behind funding our local journalism. You can help by participating in our "I Support" program, allowing us to keep offering readers access to our incisive coverage of local news, food and culture with no paywalls.
Make a one-time donation today for as little as $1.
Nick Rallo
Contact: Nick Rallo