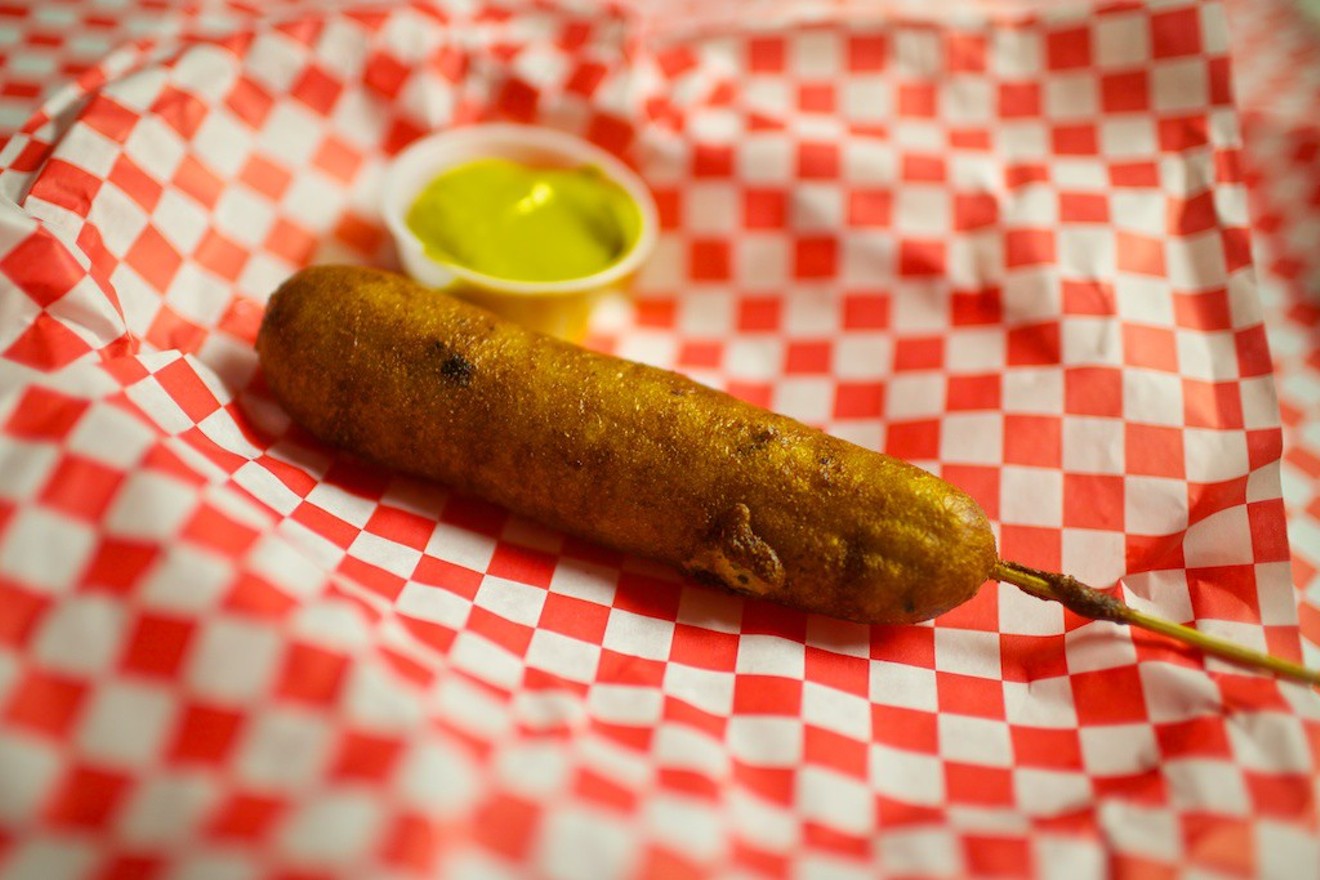 The off-menu, late-night corn dog at the Lakewood Landing, a homemade, jalapeño cornbread batter encased around a Rudolph’s sausage. Patrick Michels
All-American is a series that looks at beloved, longstanding North Texas eateries and examines their history while exploring how the food has changed — for the good or bad — over the years.

Time is on my side at the Lakewood Landing. The jukebox, with a little help from Mick Jagger, eases me in as a cold Shiner Bock hits the coaster. The lights are dim, the booth seats are flaking away and the Bud Light wall lamps glow yellow like dive bar dandelions. Pool balls crack. These are things you feel and notice at the Lakewood Landing, where soul-assuaging comfort practically hangs in the air.

Roger Nelson, the Landing’s general manager for eight years, sits on some precarious wood behind the bar and smokes a cigarette on a chilly night.

It reminds of a time that I was at the Landing’s patio on a weekend, and a drunk, seemingly troubled man started screaming near the bar’s front door. Storming out, the man slammed the door hard enough to break it off the hinges. The Landing staff booted the man, hand-drilled the door back on, and life moved forward. This is one of the reasons why the Landing’s one of the greatest bars in the country: The front door is where you leave your anxieties.

“It’s a dive bar in the sense that we’re very simple,” Nelson says. “No frills, good personalities, good drinks, good time. Always mellow. We really watch to make sure nobody’s harassing anyone. We give people rides home.” He’s given folks a ride home himself, too. “Nobody’s not comfortable at the Landing.” 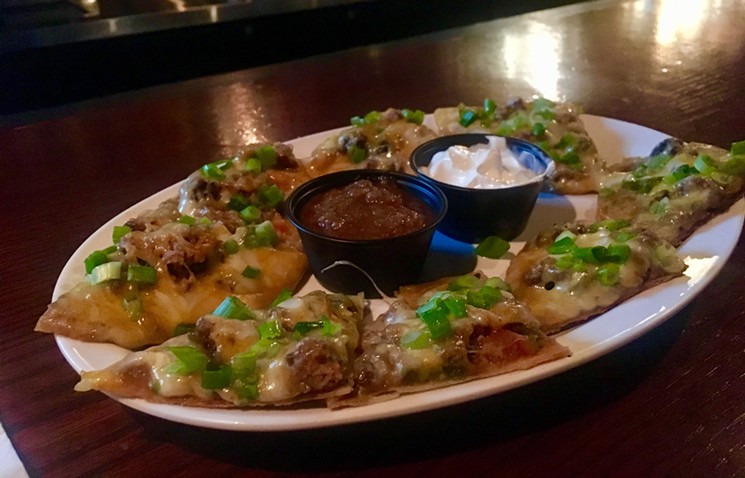 The Landing's nachos are a classic.
Nick Rallo
Nachos, a classic at the Landing, drop in front of me. The magic of these nachos is in the construction: On each individual chip — which is sturdy but thin and crispy — there’s a smooth layer refried beans, cheese, tomatoes, fresh jalapeños and beef, and a layer of Monterey Jack and cheddar that’s melted so evenly, you start to wonder if there’s a geometry professor in the kitchen.

Green onions top each nacho chip for an herbal crunch, and they come with sour cream and salsa for dipping. Pair them with an ice-cold beer, and you’ll be in bar heaven.

Their burgers are also deeply satisfying. An 80 percent beef, 20 percent fat patty sizzles on the flat-top and is served with all the things you like on a simple-as-hell burger (add bacon because you’re treating yourself). The late-night corn dogs are a cult favorite: Rudolph’s, the 100-year-old butcher shop in Deep Ellum, crafts sausages special for the Landing, and they’re battered in a house-made jalapeño corn bread. They appear (off-menu) after 11 p.m. on the weekdays, and midnight on weekends. Stab them into some mustard and eat that crispy bit that collects around the wooden stick. It’ll change you.

The Lakewood Landing, Nelson says, is right around 50 years old; it used to be a Goff’s Hamburgers. On the night Nelson and I are talking, it’s owner Bill Rossell’s 19th anniversary of owning the joint. Rossell recently brought on a new chef, Mario Martinez, who’s in the kitchen making sure the Landing’s food is good and consistent.

When I ask Nelson if there’s any changes coming at the Landing, he responds with an incredulity that you expect from a neighborhood bar:

With the unchanged decor — wood paneling and creaky fans and a cigarette machine front and center — the Landing’s age likely won’t surprise you. I polish off the nachos, a little heat from the jalapeños creeping up, and drain the beer.

Walking into Lakewood Landing feels, somehow, like you’ve strolled onto the set of a movie that’s about you. People turn for a minute to see you walk in, and then it’s back to the business of a good music, a good burger and a great bar that you can call home.