Panther City BBQ is serving top-notch barbecue from the spot where Heim Barbecue first made its name. Chris Wolfgang
You're only three steps out of the car when the smell of barbecue smoke hits your nose at Panther City BBQ — possibly fewer, depending on where you park. It's the olfactory signal that lets you know you're in the right place.

Barbecue fans familiar with this side of DFW will recognize the location immediately; Heim Barbecue got its start in similar fashion on this very spot, selling meats out of a trailer next to the Republic Street Bar, which led to its permanent spot less than a mile away. Panther City BBQ has been smoking meats since 2014 but only started serving at this spot in January, after another barbecue purveyor called it quits.

Panther City's selection of barbecued meats is as ambitious as any brick-and-mortar shop. There's brisket, pulled pork, spare ribs and two kinds of sausage, as you'd expect. But you'll also find smoked turkey breast, smoked bologna and, as a nod to Heim, pork belly burnt ends. All that meat is smoked with post oak and hickory in two smokers sitting just behind the trailer. 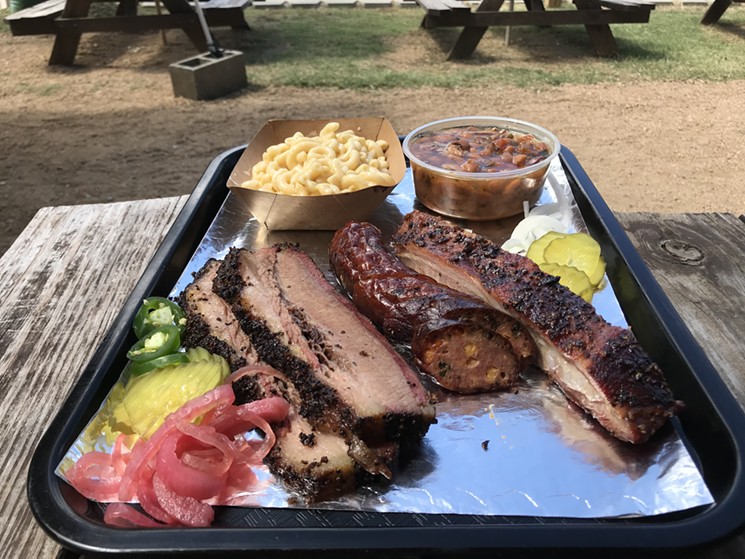 Panther City's barbecue basics are some of the best in Fort Worth.
Chris Wolfgang
The benefits of serving out of a food truck are obvious to new restaurateurs; not needing to worry about a full building and the obligations that come with it are a boon to the bottom line. That fiscal bonus translates to the menu at Panther City, where the per-pound prices for meats seem be a dollar or two less than what we're used to. And on our three-meat plate of brisket, spare ribs and jalapeño-cheddar sausage, along with a side of macaroni and cheese and borracho beans, we were struck by the amount of food we got for just $16. In fact, it may be the barbecue bargain of the year.

Better yet, our $16 bought us some top-notch barbecue. Two generous slices of lean brisket sported a smoke ring that would be the envy of any backyard pit boss, as well as a nicely rendered fat cap pebbled with a peppery bark. The brisket was perhaps a touch light on smokiness but was juicier than any slice of lean brisket has any right to be.

Equally delicious was the sausage, with a thick casing that had wilted under the smoke but held in copious amounts of ground meat, jalapeños and cheese morsels. Rounding out our trio of meats, the massive spare rib had lots of tender meat on the bone, and we picked up bits of sweetness in the spicy rub. 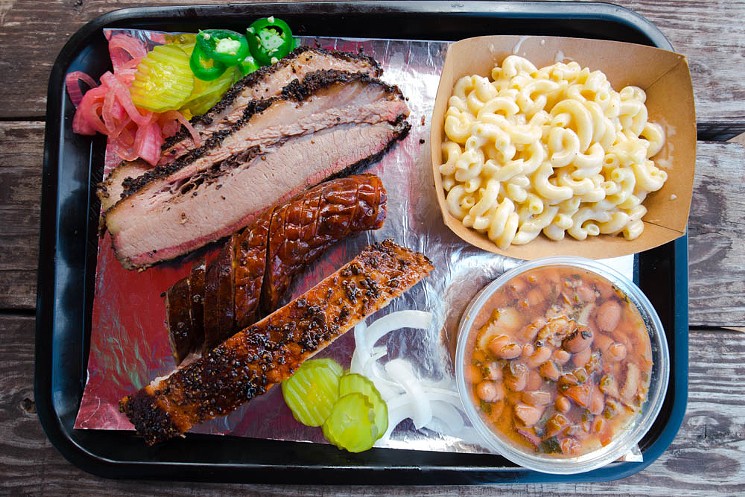 For $16, Panther City's three-meat tray may be the barbecue bargain of the year.
Chris Wolfgang
The macaroni and cheese held true to promise, and we thought the borracho beans, in their thin and spicy broth, were a unique choice. The other side options are a red-skin potato salad and creamed corn, and banana pudding is the sole dessert choice.

We hoped to try more of Panther City's offerings; in addition to the pork belly burnt ends, there was a pork belly jalapeño popper and brisket elotes as a special on the day we visited. But honestly, we were too stuffed from the three-meat combo to order any more food.

The only curiosity about Panther City BBQ is the lack of a crowd. Don't get us wrong — not having to wait in the summer heat for barbecue this good is a bonus in our books, but it was somewhat surprising to see only three other sales made in the hour of our visit. Judging by Panther City's Facebook feed, selling out seems to happen regularly, so perhaps we were fortunate to miss the crowds with our Saturday visit just as the truck opened for the day.

By comparison, we drove by Heim after we left, and a modest queue of patrons had already spilled out on the sidewalk. The draw of air conditioning can't be overstated in Texas, but if the line at Heim ever deters you, you can do much worse than to skip over to Panther City's food truck to fill your barbecue fix.

Panther City BBQ, 201 E. Hattie St., Fort Worth
KEEP THE DALLAS OBSERVER FREE... Since we started the Dallas Observer, it has been defined as the free, independent voice of Dallas, and we'd like to keep it that way. With local media under siege, it's more important than ever for us to rally support behind funding our local journalism. You can help by participating in our "I Support" program, allowing us to keep offering readers access to our incisive coverage of local news, food and culture with no paywalls.
Make a one-time donation today for as little as $1.