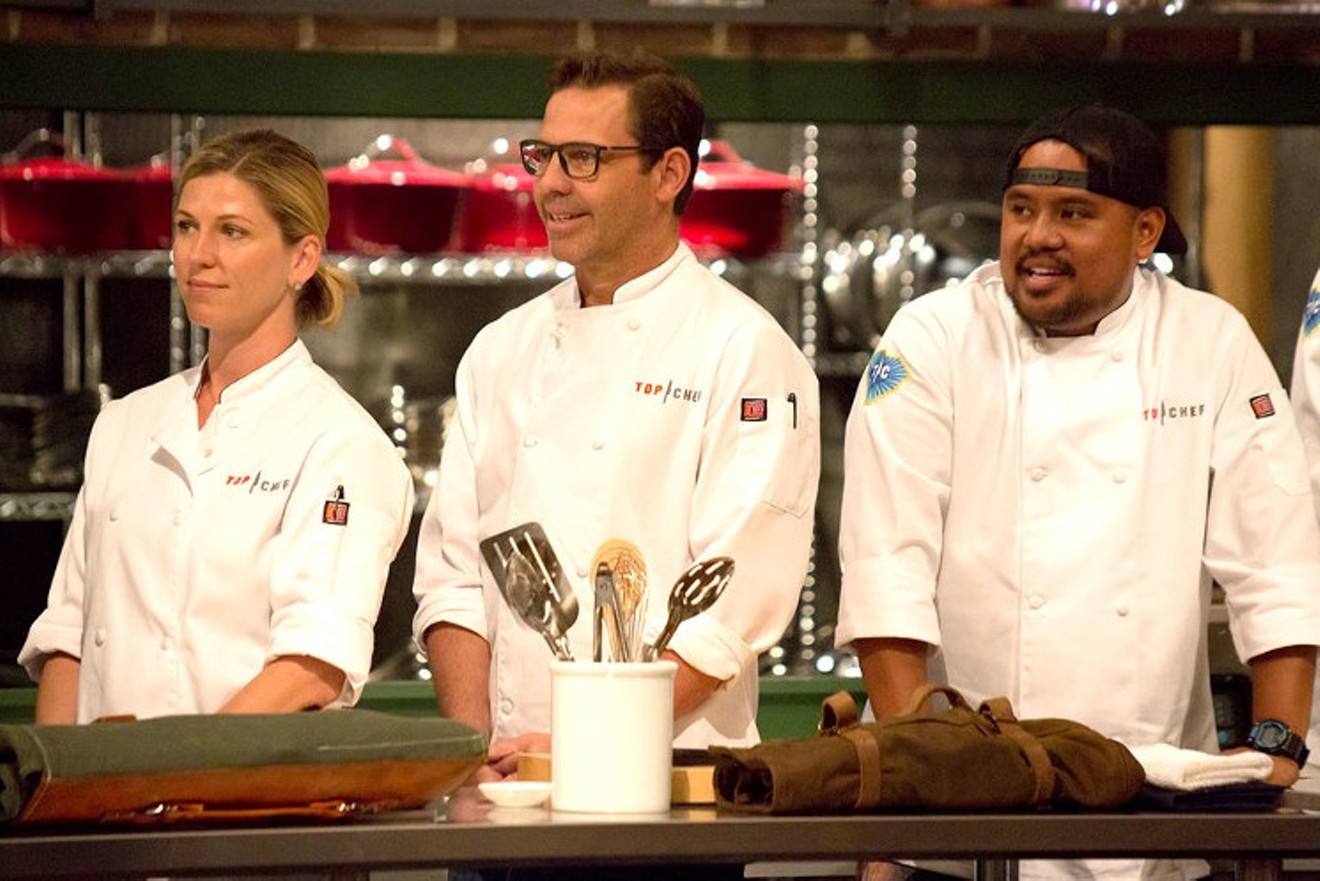 Tesar has been uncharacteristically quiet on this season of Top Chef. But is his newfound zen hurting his chances at reality TV show infamy? Courtesy of Bravo
Sitting down with chef John Tesar is like a therapy session. The two-time Top Chef contestant and bad press magnet has changed. Unlike season 10 Tesar, season 14 Tesar is nice to his competitors. He talks about his time in therapy and frequently references his newfound zen. He’s also not nearly as outrageous, which, in the world of reality TV, means less screen time.

But sitting down with Tesar, it’s not hard to get him to open up. He first came to Dallas 11 years ago, and his firecracker personality became just as famous, if not more so, than his food. Leaning back in a chair in one of the private dining rooms in Knife, his Dallas steakhouse, he talks animatedly with his hands and opens up about his past, his demons and his insecurities.

His asshole image came from feelings of insecurity, he says, feelings that have now been squashed by the successes of his former restaurant Spoon and his current pursuit, Knife. “I think I still have the same insecurities, but they’re not fed by the lack of validation or the lack of something working,” he says.

Those insecurities came from a lifetime of demons. He was adopted at birth, he says, and has dealt with abandonment issues for as long as he can remember. From 17 to 35, he had a cocaine problem, was clean and sober for about six years, but today, he says, he drinks wine and smokes pot. He goes to therapy and has participated in EMDR psychotherapy — often used to help people with post traumatic stress disorder — to deal with his adoption and how it affected his choices over the years.

He says he does feel misunderstood, though. Reality TV is heavily edited, press sometimes doesn’t get the whole picture and his fight with Dallas Morning News restaurant critic Leslie Brenner triggered the memory of bad blood between Tesar and another New York restaurant critic, Bill Grimes, which is why he lashed out the way he did, he says. Both critics, he says, anointed young chefs, and then their restaurants shuttered. “I’m not a know-it-all, but I predicted this years ago,” Tesar says.

“I’m very misunderstood and always have been,” he says. “I’m quiet, but I’m outspoken. I have an opinion. I believe in justice. I believe in social opinion. I believe in equality. I believe in gun control. I’m sorry. I don’t want to take guns away from people, but there has to be some kind of common sense when it comes to these modern-day issues that are causing drama and terror in lives, let alone the real terror out there.”

It’s not unusual for Tesar to ping-pong so quickly from topic to topic. Tesar goes off on tangents quite a bit during our conversation. It’s clear that he reads a lot, but he also spends a lot of time in his own head, and he has a difficult time staying on one topic.

And the topics he does discuss vary wildly. He has a great disgust for the current political climate. He talks a little bit about how young people begin to brand themselves straight out of the womb. He mentions how it’s nice to have young writers on the scene who have a fresh perspective on things. But when he veered back on course, he recites what has almost become a mantra for him at this point: that his insecurities are a driving force behind his successes and failures. The Top Chef season 10 Tesar was insecure, he says. He was just off a failed stint at The Mansion, which he says was “a dump” when he got there, and D Magazine declaring him the most hated chef in Dallas.

“Very rarely, up until recently, do people talk about my abilities as a chef or my ability to come up with a concept or develop something and express my experience I’ve learned over almost 40 years of being a chef,” he says.

If others aren’t going to talk about his talent as a chef, Tesar is going to. Knife has reinvented the steakhouse, he says, and has received great reviews on Yelp and from its customers, and he says it’s also brought him great financial success. The good thing about Tesar is even when you start to think he’s not the same Tesar from season 10 — the guy who threatened to not share an entire jar of pickles just so his competitor would lose — he slips in a reminder that Tesar is not afraid of grand gestures, or grand statements.

“I know this sounds ridiculous, but I don’t think we’ve gotten enough attention, because we reinvented the steakhouse,” he says of Knife. “I’m not gloating by any means, I’m just blown away by it.”

Even still, Tesar recognizes that he came across as a name-dropping asshole during season 10, but that was his life. He was a ’90s hardcore chef who stayed up late and partied with other hardcore chefs and hung out at Blue Ribbon, so yeah, he dropped some names. But he decided to own the asshole title. “A long time ago, I said, ‘If people want me to be a bad boy, fuck.’ Who doesn’t want to be a bad boy?”

Even with that kind of reputation, he says watching Top Chef has been therapeutic for him. Few people get the chance to watch themselves from afar and observe how other people are reacting. It’s forced him to open up, he says, and look at his demons straight-on.

But the nearly 60-year-old chef is still blessed, he says. He might be a late bloomer, but he’s blessed nonetheless. Things have finally lined up for him. He’s not “that guy” anymore, he says.

“I guess I’m still perceived as saying stupid things at times, and that’s kind of half the fun of being me. People expect it from me now, and I can play with it a little bit because I’ve got control of it. Where before, I used to do it because I was frustrated or angry. You’re so frustrated, you don’t want to hurt people, but you want to blow shit up all the time.”

Unlike during season 10, Tesar has some anchors holding him down now: his restaurant at The Highland, a 6-year-old son and a wife he’s now separated from. But he is still Tesar deep down, an archetype who oozes confidence despite the circumstance, and a man for whom some cuts still sting.

If it weren’t for a certain Dallas restaurant critic, he says, he probably would have a James Beard award by now. He simultaneously questions the validity of the awards while lamenting the fact that he has never won one.

“I don’t think it has much value. They’ve kind of run out of people to give it to,” he says. “I don’t mean to say that, because it’s a great organization to some extent, but I think giving out awards just for the sake of giving out awards every year, it lessens what an award means.”

That ever-present contradiction is a part of Tesar that certainly hasn’t changed.