At Fachini, theatricality and retro cool will be the orders of the day. Snazzily attired waiters — expect full tuxedos and bow ties — will make Caesar salad at your table. Temptations like a 100-layer lasagna will make sure that diners don’t simply load up on the free antipasti gracing every table.

“It is an unapologetic homage and exploration of Italian-American food and culture — as imagined by me,” Barsotti said in a pre-debut interview. “I’m so excited to get it open.”

In the fine-dining scene, Italian-American food has gone out of style in recent years. Spaghetti Bolognese has been replaced at the most creative and fashionable restaurants with ultraspecific, veggie-centric cuisines from Italy’s regions. Barsotti’s first and finest restaurant, Nonna, is part of that wave of Italian regional cooking, as are beloved Bishop Arts restaurant Lucia and the relative newcomers Mille Lire and Da Mario.

At Fachini, Barsotti and his crew, including chef de cuisine Jarred Russell, will throw all that out the window. Instead, they’re channeling the Italian-American restaurants of 20th-century New England. Fachini isn’t based on any particular restaurant — it’s a work of pure imagination — but during the design process, Barsotti found himself watching The Sopranos, the Godfather trilogy and other classic gangster pictures. He admits that his new place is also inspired by friend and colleague Nick Badovinus, whose hugely successful restaurant Town Hearth provides a model for Fachini’s theatrical flair, and whose new pizzeria, Perfect Union Pizza Co., just opened next door to Fachini.


“I feel like when you make something personal and when you understand where it came from, it’s not bastardization or fusion. It’s just doing something worth doing.” — Fachini owner Julian Barsotti

That flair extends to the staff uniforms.

“Waiters are wearing full tuxedo with navy bow ties,” Barsotti said. “Busers are wearing white dinner jackets with black pants.” But he stressed that the attire is in good fun and in keeping with the style of restaurant to which he pays tribute. Customers are not expected to meet the same standards. 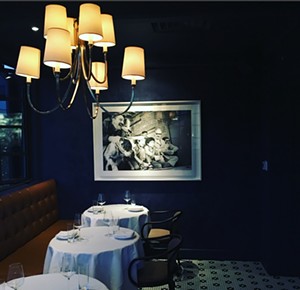 The interior of Fachini looks ready for a glamorous night out.
courtesy Julian Barsotti (via Instagram)
A lot of the meals will be familiar classics, and the kitchen knows that they need to be perfect.

“We’re trying to do them in ways that hopefully overdeliver in terms of your expectation,” Barsotti said. “You know — rigatoni alla vodka, we need to have a really outstanding version of it.”

This isn’t just a whim from Barsotti. Fachini is his fourth restaurant in more than a decade, and each of them has a personal meaning. The new spot reflects his Italian-American upbringing and his acceptance of the fact that immigrant food, often derided by native Italians as a bastardization, is a cuisine of its own, one worth celebrating.

Barsotti, who began his career with serious approaches to pure Italian styles, explained, “I’ve totally come around. [Italian-American] food came from a place that was organic in terms of immigrants coming here and creating their own cuisine based off their own experiences and localities and ingredients. There’s nothing wrong with that. There’s everything great with it. Something that becomes that ubiquitous, that’s usually because it’s really good.

“I feel like when you make something personal and when you understand where it came from, it’s not bastardization or fusion. It’s just doing something worth doing.”

And Gloria Fachini was the perfect namesake for this new restaurant. As a first-generation Italian-American living in Memphis, she adopted the American pronunciation of her name, with the “ch” spoken as in cheese. Visiting Italian chefs recently tried to correct Barsotti by Italiansplaining the original, “authentic” pronunciation of his family’s name.

He still says it Gloria’s way.

Fachini, 33A Highland Park Village, Highland Park. 214-838-9688. Open 5-11 p.m. Sunday through Wednesday and 5-11:30 p.m. Thursday through Saturday (bar opens at 5 p.m., kitchen starts serving at 5:30 p.m.).
KEEP THE DALLAS OBSERVER FREE... Since we started the Dallas Observer, it has been defined as the free, independent voice of Dallas, and we'd like to keep it that way. With local media under siege, it's more important than ever for us to rally support behind funding our local journalism. You can help by participating in our "I Support" program, allowing us to keep offering readers access to our incisive coverage of local news, food and culture with no paywalls.
Make a one-time donation today for as little as $1.