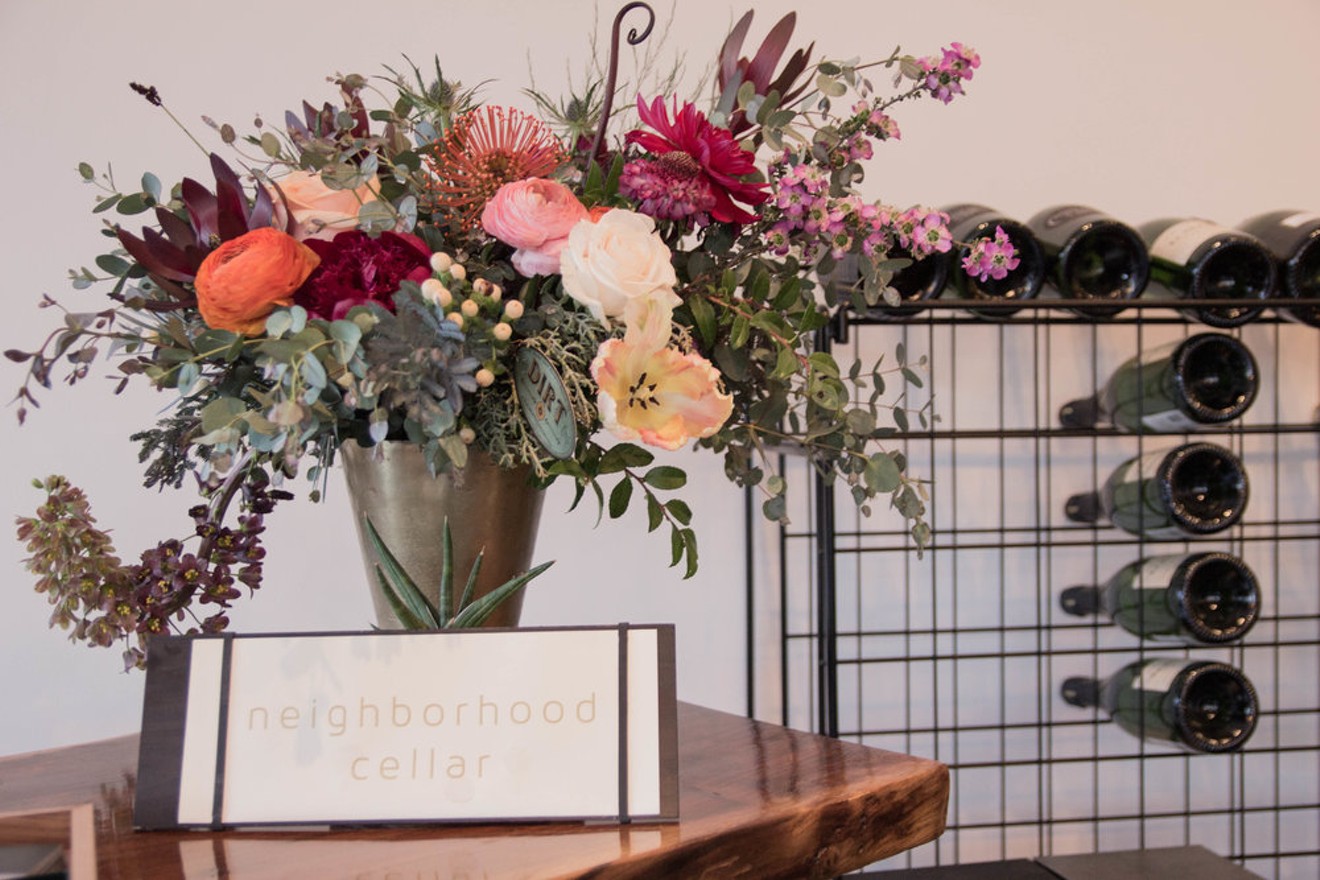 Bishop Arts' newly-revamped wine bar has welcoming touches. Courtesy LMentsofstyle.com
For patrons of the Bishop Arts neighborhood’s short-lived wine shop, WinePoste, spring has been a time of dramatic change. The bacchanalian murals stretching across the walls came down, replaced by stark white. The record player that spun classic rock and soul music disappeared. And the name changed to Neighborhood Cellar.

What’s in a new name? Everything, it turns out. After WinePoste was purchased by two new owners, they’ve set out to refashion Neighborhood Cellar with a more approachable, community-minded spirit. The goal is to be friendlier, more casual and more in tune with Bishop Arts as a whole.

“Whether you want to spend $10 a bottle, $5 a glass, or whether you want to put something in your cellar for a few years, we can help with that,” says co-owner Nick Mulenos, a technology consultant who runs the store’s website and internet commerce. “We're making ourselves available, accessible and friendly to people who want $5 sweet wine all the way up through the people who like really nerdy stuff like I do.”

The new Neighborhood Cellar stocks the full line of wines from neighbor Oak Cliff Cellars, plus a number of wines imported by Dallas companies. They’ve doubled the number of wines for sale. A glass here is 8 ounces, not 5. As Mulenos’ partner, certified level-2 sommelier Ian Montgomery, explains, “We keep our doors open except when it’s a windy day and it blows our ceiling tiles around.”

There’s a new monthly series of catered pop-up dinners, the first of which brought chef David Anthony Temple back from his new home in Belize. An easygoing wine club – with delivery for customers’ convenience – is in the works. And those blank walls? New artwork is on order from local artists, too.

WinePoste had maintained some distance from its surroundings; Montgomery and Mulenos both say they have customers walk in who didn’t realize a wine bar had existed on the corner for so long. “We’re maintaining the retail shop and bar business model they had previously,” Mulenos explains, “but very aggressively pursuing business partnerships with places we love around Dallas.” That means possible collaborations with Bishop Arts neighbors. “We also want to do pairings with food trucks, or pair Champagnes and rosés with macarons.” This is an example of when it's good to follow directions.
Brian Reinhart
Montgomery just assembled new picnic tables for the patio, and new interior furniture is on the way. A new bar is going into the back of the space. Heavy old curtains came down from the windows. The shop doesn’t have a kitchen or a license to cook food, so the pop-up dinners are technically catered; Temple brought all his food and equipment for the first dinner, assembling dishes like tostadas and ceviche. During the Observer's conversation with Montgomery, an even higher-profile Dallas chef called to arrange a possible upcoming dinner.

Neighborhood Cellar has a winery license, TABC Type G, that allows them to sell bottles to go at retail price, sell wine on premises, offer free tastings and ship to most other states. “We experiment with some blending and winemaking,” Montgomery says, but those dabblings won’t go on sale until they get the hang of it.


“Wine should never be a pretentious thing."

The happiest difference between WinePoste and its replacement is affordability. The old shop had seriously tempting wines from small producers and lesser-known regions, but most of them clocked in at $40-70. Aside from a few nerds (like myself), Bishop Arts wasn’t especially interested. Now there are just as many temptations, but with a few carefully-selected exceptions, the wines top out around $30.

“[Previous ownership] did have a fairly extensive knowledge of wine and quality wine, but the things they brought in were very much indicative of a private tasting room,” says Mulenos, who especially admired their “killer rieslings.” But WinePoste was losing money, and Mulenos suggests its eclectic taste was part of the reason why: A focus on the “high-dollar and high-knowledge customer…really alienated the rest of the crowd. It's not about the pretension for us, it's not about getting the stuff nobody else gets.”

“Everybody’s got different taste,” Montgomery adds. “The biggest seller is sweet stuff [like moscato]. I buy for the tastes of our customers and try to have a diverse list. I endorse everything we sell here.”

That egalitarian impulse might ruffle one or two feathers, but Neighborhood Cellar is based on it. “Something I’m pretty passionate about,” Mulenos says, “is I love shattering the notion that many people have that, they're not talented or versatile enough to enjoy [wine], and they’re not rich enough to enjoy it. It’s been very pleasurable to me to find out that that's bullcrap, because I’m not rich and I don’t have a palate up to the level of a second-level sommelier.

“People come into the shop all the time and say, aw, my palate’s just not really advanced enough to pick all those things out, and I love talking to these people because they’re wrong and I tell them they’re wrong. It doesn’t make sense to me why we [in the industry] would want to keep people in the box of, I’m a somm, I have the tasting notes and I’m right. I know some in the business survive that way, and that’s fine, but we’re not gonna do that.”