After 48 Years, Ojeda's Tex-Mex Is Still a Cheese-Stuffed Monument to the American Dream 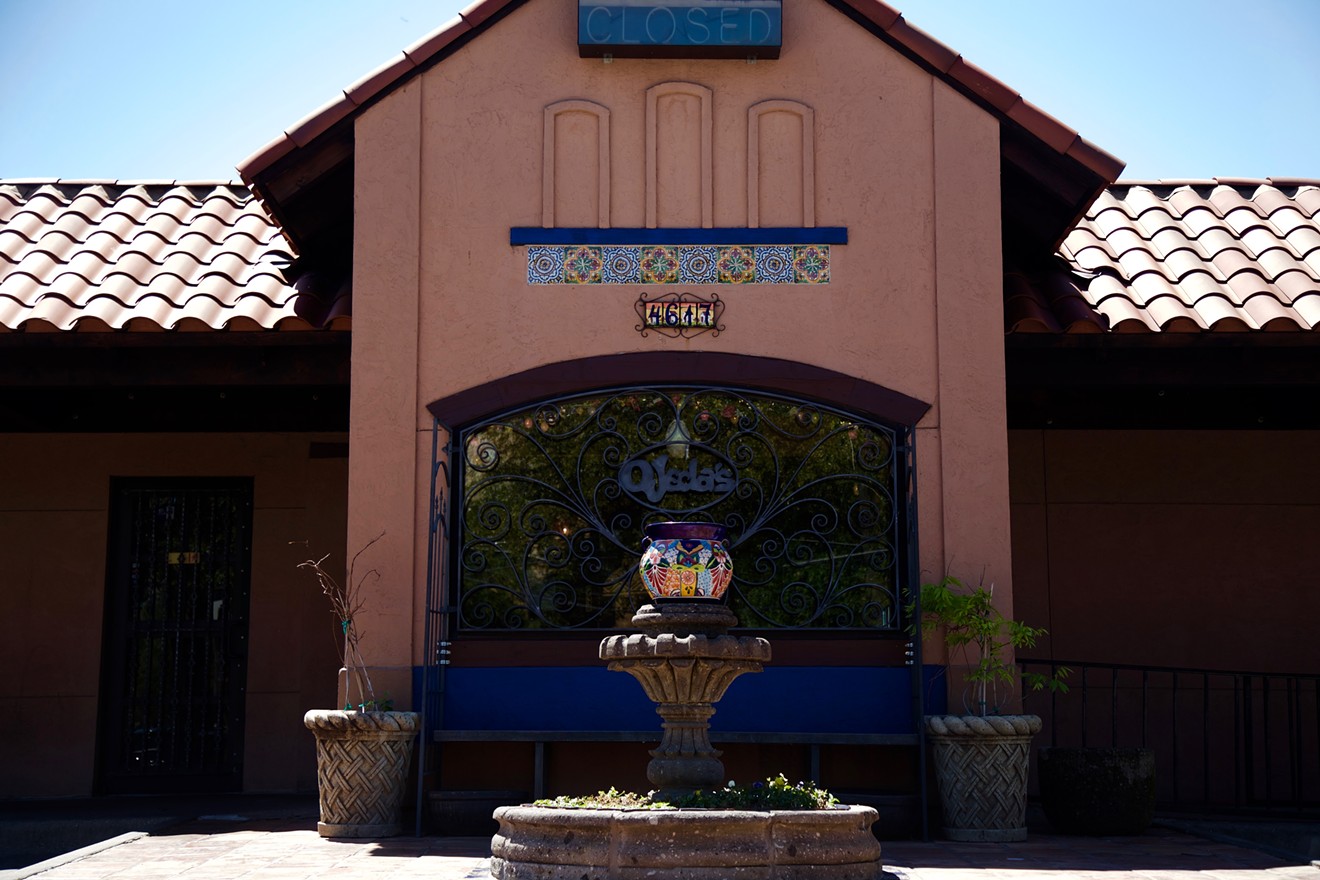 Ojeda's has been Dallas' standby for Tex-Mex on Maple Avenue for 48 years. Chris Wolfgang
All-American is a series that looks at beloved, longstanding North Texas eateries and examines their history while exploring how the food has changed — for the good or bad — over the years.

The story of Ojeda’s Restaurant reads like the American dream: A couple works hard, raises a family, saves a little bit of money and starts their own business. And that’s just what Ben and Cecilia Ojeda did in 1969, leasing a small space at the corner of Maple Avenue and Lucas Drive and serving Tex-Mex that would become a Dallas staple.

The Ojedas had nine children, and the family still runs Ojeda’s today, now in a tile-roofed building two blocks up from the original Maple Avenue location. On a recent afternoon, over a plate of cheese and onion enchiladas, Ben and Cecilia’s son Tommy, and his nieces Lisa Ojeda and Christina Alft, reflected on the family business that’s coming up on its 48th anniversary.

Tommy was 18 years old and finishing high school when his parents opened Ojeda's, and he started out bussing tables. The small restaurant did a decent trade, but that would soon change for the better.

“Lee Cullum from Channel 13 came in and decided to do a story, and that’s what really made the restaurant busy,” Tommy says. “We were open from 11 to 2 and 5 to 9. And we had to turn people away.”

Christina hadn’t been born yet, but she would later learn just how busy her grandparents’ restaurant had become.

“I’d hear stories of Grandma going to customers eating, and if they were about done, she’d just pick up their stuff, and tell them they had to move it,” she says.

Tommy laughs and tells us his mother wasn’t shy about moving people along.

“She’d come up to tables and [Tommy wraps on the table with his knuckles] ‘Hey, I need this table,’" Tommy says. “Everyone would be like 'Oh, that’s so cool!' But if she didn’t do it to you, people would wonder, 'What’s wrong with Mama Ojeda tonight?' Getting that knock on the table was like a badge of honor.” 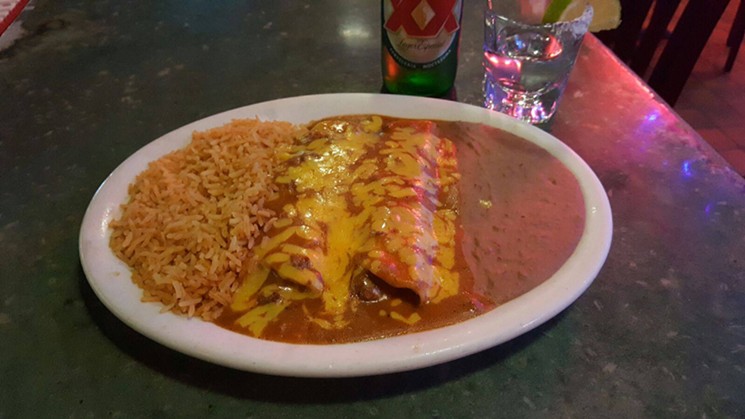 Ojeda's enchiladas, made the same way as "Papa" Ben Ojeda made them in 1969.
Ojeda's via Facebook
With business booming and celebrities such as Johnny Mathis and Jack Nicholson counted as patrons, Ben and Cecilia bought Ojeda's current location in the late 1970s. As the kids became old enough, working in the restaurant became a family affair.

“One by one, all of us worked in the kitchen, and Dad taught us all the recipes and how to open and close. But the food has always been the most important thing,” Tommy says as he works through his plate of enchiladas. “This is the cheese and onion enchilada that my daddy made, and it's his chile con carne recipe that’s been here for 48 years.”

When Ben Ojeda died in 1989, there were some questions about how the restaurant would go on or if things were going to change.

“Everyone was telling Mother what to do. Her nine children were really intelligent, and we’d all been working in the restaurant,” Tommy says. “She gathered us all and told us, ‘Your daddy left me 100 percent of the stock. None of you can tell me anything.’ That switched everything. I thought I was the smartest person in the world, but she said, ‘This is the way it’s going to be.’ We all fell back in line.”

That’s not to say that some things at Ojeda's haven't changed. There are vegetarian and gluten-free menu offerings now, and a larger bar with a wider selection of tequilas. And, as Christina points out, there's Facebook.

“We actually do keep up our presence out there on social media, and I’ve really started embracing it now, because you kind of have to be to get the younger crowds,” she says. 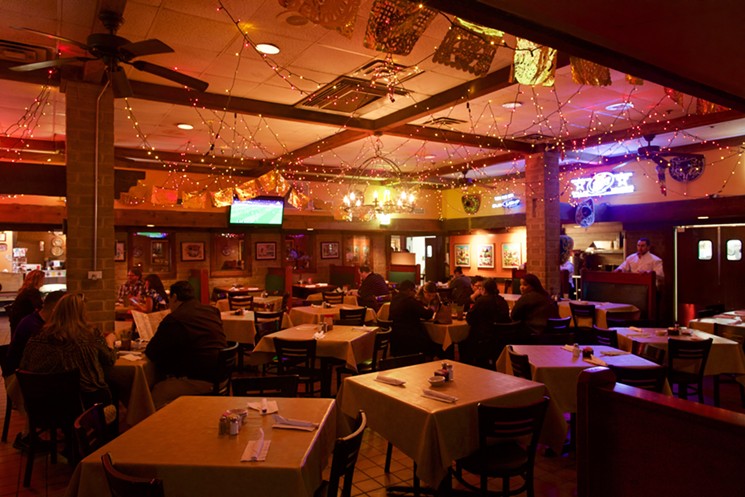 Celebs and no-names alike have come to Ojeda's for Tex-Mex for almost 50 years.
Chris Wolfgang
On April 18, Ojeda’s will celebrate its 48th anniversary with enchilada plates, still the way "Papa" Ben Ojeda made them, for $4.80. Other specials will include $4.80 margarita mugs and $0.48 sopapillas. Some of Ojeda's staff, even those who weren't born into the family, have been working there for almost as long as the restaurant has existed.

“We have cooks that have been here 20 or 25 years, waitresses who have been here 40 years," Tommy says. "When you have people working here as long as they have, the waiters and waitresses help out the new people, and they just keep building on top of each other. We have a lot to be proud of.”

To some, the idea of working and living with family day in and day out may seem like too much, but the laughter that frequently breaks out in our conversation paints a different picture.

“It’s a fun job,” Tommy says. “We’ve got a lot of nephews and nieces coming in, and there are some changes coming. But the food and the family will stay the same. It’s been a blessing. We have a lot to be thankful for.”