One of Dallas’ most prolific chefs has dropped the name he worked so hard to build and now goes by the Chef With No Name. Courtesy of the Chef With No Name
After Chelsea Corner opened on the north end of McKinney Avenue in 1974, it quickly became a hot spot. Even after it changed ownership and names, people still kept coming. You might remember the spot as Corner Bar, which was the most recent venture in the location that closed in 2015.

“I worked here when I went to SMU. I think the thing I remember the most about this place is it literally didn’t have a type of person,” says Len Critcher, an owner and partner in Chelsea Corner 2.0. “As a 20-year-old working here at the time, watching the early 20s cross all the way into the 50s, it was everybody’s local place. It had an interesting saying on the menu. It’s so cheesy, but it’s so true: 'A good time is guaranteed for all,’ and that’s what it is.”

The place feels like a nice bar when you walk in. It has a decent sized menu, with pizza, burgers, appetizers and extras. The goal, according to the chef who crafted the menu, is to keep the food “approachable.” 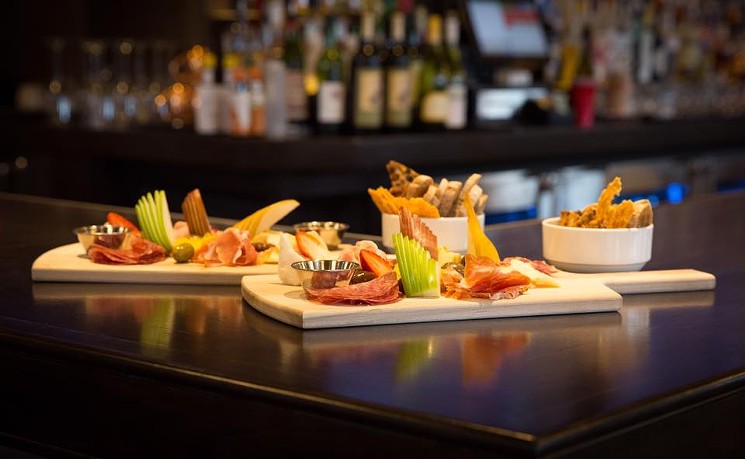 At the resurrected Chelsea Corner, expect approachable dishes with a refined touch.
Courtesy of Chelsea Corner
“It’s what people love to eat; it’s not fussy. I think food should take you back to a place,” says the chef.
The chef knows what he’s doing in a kitchen. People have loved his food in Dallas for decades, and they know his name. But his name won’t be on his chef’s jacket at Chelsea Corner because of a lawsuit over the rights to use his name in the restaurant business, which he allegedly signed away in 2009.

“I am in a little litigation with my former partner. I am still a partner with Kent Rathbun Concepts and a part owner; however, I am no longer part of the everyday operations for Abacus, Jasper’s or Kent Rathbun Catering. I also am in litigation about my name and likeness,” says the Chef With No Name — who, by the way, is married to Tracy Rathbun.

If this were a story about this chef’s favorite way to prepare lobster, we would surely use the name of Tracy Rathbun’s husband. But because this story is associated with Mrs. Rathbun’s husband’s new gig, we won’t.

“I want it to be made very clear that neither one of us felt we needed to use either of our names to make Chelsea Corner,” Critcher says. “It was more about chef the man, not his name.”

To get around this, and to put something on the chef’s jacket, the group behind Chelsea Corner is calling him the Chef With No Name. His chef’s jacket gets the hashtag version of the title.

If you think this sounds ridiculous, you are not alone. In fact, those touting it agree with you because, as Critcher says, the litigation is somewhat preposterous.

“In my particular view on it, it’s absolutely asinine, what’s going on ... everyone in this damn city knows who you are,” Critcher said to the chef during a recent meeting.

“It’s already out there, this is a punishment,” Critcher says. “Punishment’s not really the right word: It’s big-boy legal tactics to hurt somebody, not to find resolution, and I don’t like that. I don’t think the city should put up with it; I think it’s wrong. I think there’s an amicable solution where everyone should win.”

So for now, the chef’s moving on with Chelsea Corner, serving staples and dishes like fish and chips.

“It’s not like I can hide, and I’m not going to hide. This is a career I’ve had for 42 years,” the chef says. “This is the only thing I’ve ever done in my life, and I’m not going to let anybody take it from me, plain and simple. So I just have to move on, even if I have to move on with a symbol and with a hashtag. … It’s ridiculous that we need to go through these procedures, but we do. And so, we’ll see what happens.”

The whole issue over the use of his name and likeness has been a lesson learned, though.

“I will never ever do that again. And there will be time when I talk louder about what mistakes I made,” he says. “I already discussed this with a number of chefs I know: Protect your property.”

He’s spending his time focusing on the bar, along with some other projects coming up.

“The Chef With No Name has a lot of stuff going on,” he says. “Tracy Rathbun, wife of Chef with No Name, is also about to open Lovers Seafood Market, on Lovers Lane and Inwood Road.

“The Chef with No Name is also working on another new restaurant called Republic. … It’s going to be kind of a Texas food kind of concept, Texas kitchen and tavern,” he says.

For now at Chelsea Corner, they’re focused on continuing to serve the neighborhood as its local watering hole; and so far, Critcher says that’s what’s happening.

“From the original Chelsea to now, you would feel familiarity,” he says. “This place will be Chelsea Corner: It will not be his, it will not be mine. We want everybody that comes to this place for them to feel its their place."