Saturday’s Food Truck Derby saw about a dozen food trucks gather in downtown Plano. Tim Cox
Around five years ago, food trucks were rare novelties in the DFW food scene. Since then, they have become familiar staples of our fast-casual dining culture. In the few years since The Truck Yard opened on Lower Greenville, permanent food truck parks have slowly been popping up throughout the suburbs at spots like the Richardson Food Truck Park and the Frisco Rail Yard.

This spring there will be a new addition to the DFW food truck culture in the form of Hub Streat, located in historic downtown Plano. In preparation for an official launch in the coming months, last week Hub Streat offered a sneak preview at its Food Truck Derby, an event consisting of food trucks, hard drinks and live music.

Hub Streat is really only partially food-truck driven, and the concept encompasses a good deal more than just that. The venue includes two large buildings with an expansive patio space between the two that features upper and lower level areas. One of these buildings – “Hub Central” – is particularly large and will be the main attraction, eventually housing a dual-level “culinary entertainment center,” with four original restaurant concepts ranging in focus from tacos to burgers to rotisserie chickens and onto pizza. Hub Streat is a new "culinary entertainment center" opening soon in downtown Plano.
Tim Cox
Hub Central will also boast a craft beer garden and cocktail bar as well as a stage for live music and more. The other, smaller building, the Pavilion, includes a “barcade” area equipped with booze and games on the bottom floor and a rooftop bar, featuring a great view of the establishment’s stage. The buildings are unfinished right now, but owners say they’ll be ready when Hub Streat officially opens in a few months.

During the preview party, meaty aromas and loud country music permeated the neighborhood, and these sensory stimuli drew quite a crowd. Hundreds of people packed the large open space, bordered by food trucks on two sides and a small stage on a third.

Even though there wasn’t much to see yet, the vibe at Hub Streat is already jovial and bright. There’s nothing really engaging about the space, but with plenty of friendly people and beer, no one seemed to care. Once the lot is finished, there will be ample seating for special events. The site will rotate through three food trucks at any given time. During the preview event, food trucks like The Butcher’s Son, Oh My Kabob! and Press Waffle were on hand feeding the long lines of hungry customers. 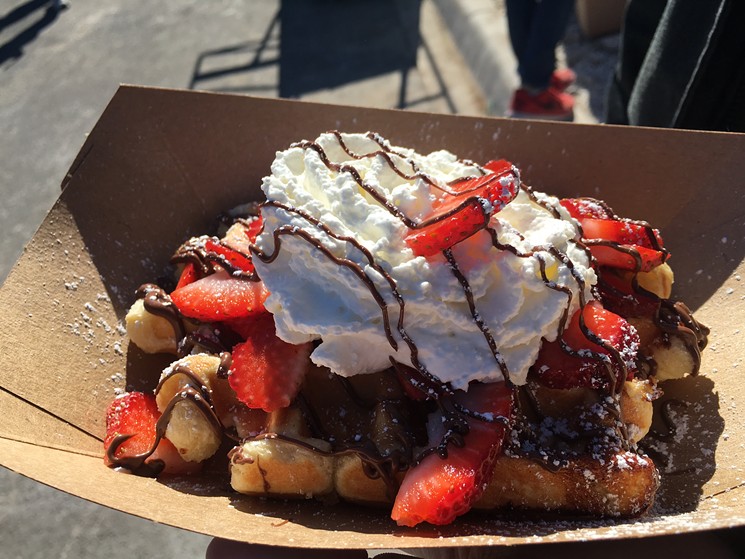 The waffles from Press Waffle Company were sweet, fluffy and one of the easier things to eat while standing.
Tim Cox
Hub Streat’s team is an interesting one. Scott Diss, who fronts The Lone Star Bottle Band, is part of the project, along with Jonathan Wagner, owner of several food trucks including Gandolfo’s Deli and the Butcher’s Son. Also on board: James West, whose company West Group Solutions specializes in restaurant consulting, and Daniel R. Scoggin, founder of Dallas-based T.G.I. Friday’s.