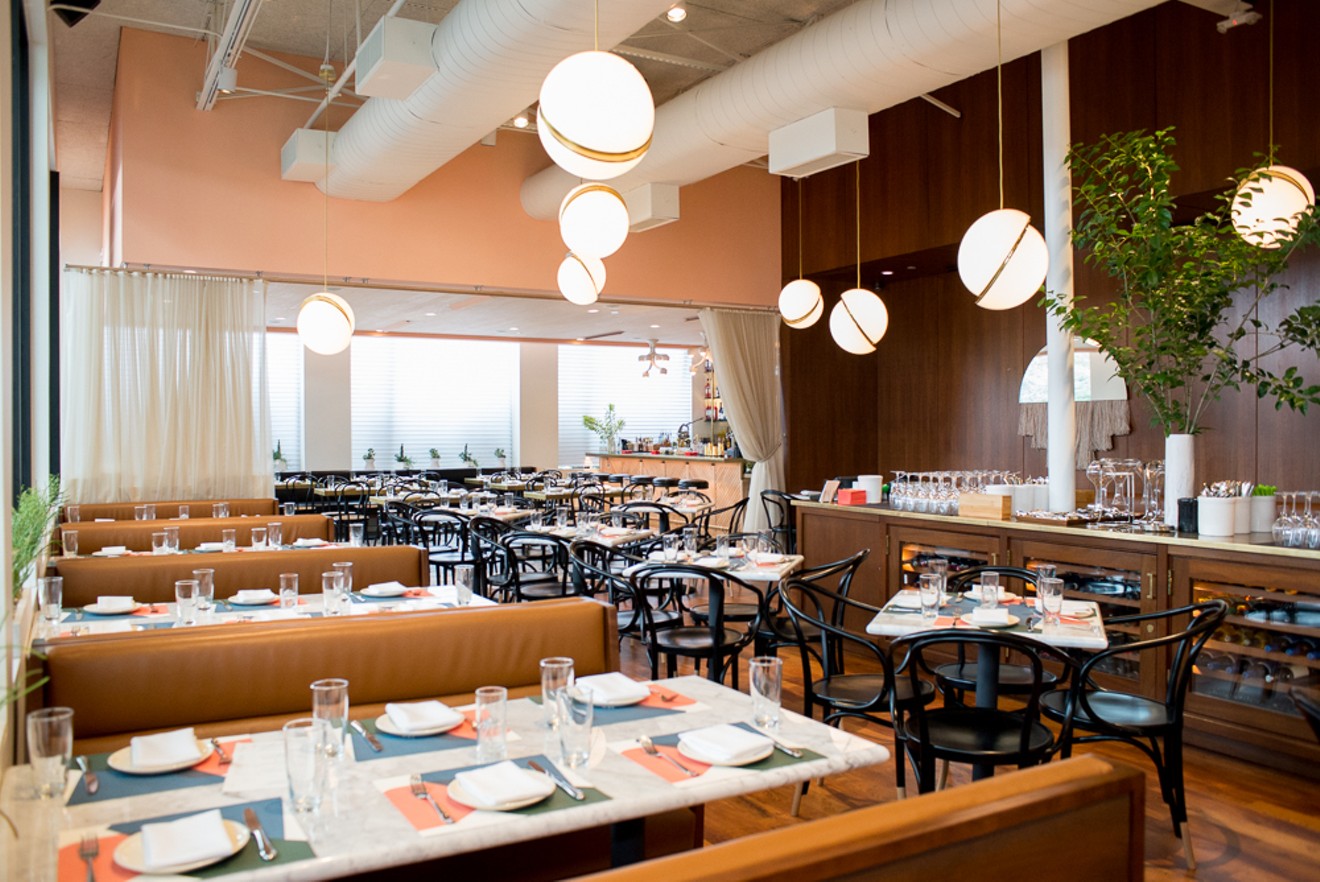 Midcentury modern aesthetic is strong at Sassetta. Alison McLean
It’s been a while since Dallas saw a new restaurant that’s as fun as Sassetta.

Step inside the restaurant’s enormous, awkwardly heavy door, and everything about the dining room is fun. The color scheme, a muted dining room in tasteful midcentury modern style set off by flashes of forest green and salmon, is cheerful. A wine storage island in between tables hints at temptation. Over the bar’s mirrored back, long rows of liquor and wine bottles glow like boozy beacons in a wash of sunlight.

Waiters walk briskly by, wearing salmon-colored ties and medical lab coats. The playlist is one of the city’s best, spotlighting peppy jazz instrumentals, winking retro crooners, Michael Jackson and the odd marching band number. If Quincy Jones’ “Soul Bossa Nova” were a restaurant, it would be Sassetta.

The customers all dress sharply, as if for a big night out, although one of the most fun things about Sassetta is that it’s — surprise! — totally affordable. At a time when Dallas restaurants are sending the cost of a glamorous date ever higher, two people here can share an appetizer, a pizza and a couple of drinks for $50.

The restaurant is at its best when it keeps things simple, especially with its pizzas and housemade pastas. The pizza and pasta descriptions use Italian words, sure, but they’re not that complicated because Sassetta doesn’t overload them. There are no supreme pizzas or head-scratching, off-the-wall pastas with improbable ingredients.

The carbonara ($15) is sheer delight, too, made with mafaldine, a pasta that looks like the wavy edges of lasagna without the flat section in the middle. Texturally, the housemade mafaldine is fun by itself, and it's even more fun when bolstered with finely ground walnuts, wilted spinach and cubes of pork jowl. It’s pure pleasure. 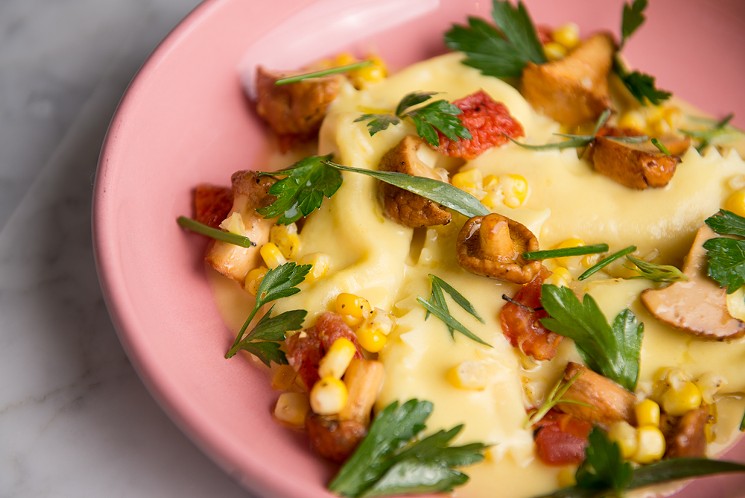 What pizza to try at Sassetta? How about all of them? They’re about the right size for two people or one person who wants to take a few slices home for breakfast. The crusts are divine: ultrathin but crisp all the way through, with the edges bubbly, flour-dusted and gently charred. Pizza centers never get soggy, thanks to the hot oven and the fact that the kitchen never goes overboard with toppings. Unusually, only two of Sassetta’s eight pizzas have red sauce.

Some of the appetizers get too caught up in Sassetta’s general atmosphere of fun. It’s surprising to see a restaurant with such fantastic main courses but such skippable starters. A romaine salad ($10) is sprinkled with a blizzard of gently shredded pecorino, so much cheese that we could hardly taste the promised bottarga or lemon-anchovy vinaigrette. Of course, this was also so much cheese that the salad remained delicious.

The chopped salad ($12) was so oversalted and overdressed that our table started talking about Olive Garden.

Likewise, lamb tartare ($14) comes mixed with such a powerfully herbaceous blend of parsley, cilantro, garlic and green olive that we couldn’t really taste lamb. Again, that’s not necessarily a deal-breaker. But as my dining companion said, “I feel like this could have been any meat and we wouldn’t know the difference. We could be eating beef. Actually, it would be better if it was tuna.”

The charred octopus appetizer ($15) is a standout.
Alison McLean
The standout appetizer involves charred octopus ($15), which impressively has a deep, smoky char that evokes backyard grilling. Somehow, the meat within is still so tender and soft it should win over anybody who thinks octopus is weird. The dish comes with shaved squash and cauliflower, a few cannellini beans and, because Sassetta’s appetizers go for excess, two sauces — the herbaceous green one is better than the spicy red. 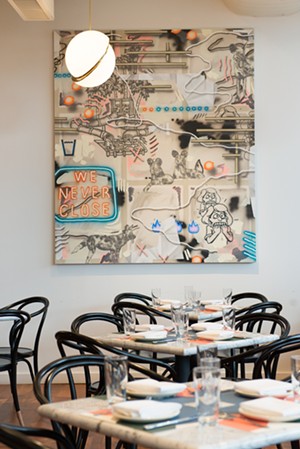 Everything in Sassetta's interior dining area is fun.
Alison McLean
There’s a lovely arugula salad ($11) filled to the brim with mushrooms and Parmesan shavings. The mushrooms, a wide but not too crazy variety, claim to be roasted but don’t taste much more than marinated, really. Regardless, with ingredients like those, as well as a few pine nuts and a dab of lemon juice, it’s hard to go wrong.

One more element worth praising: the wine list. Affordable, full of charming bargains and all Italian, the list rewards adventurers but is also kind to those who like old favorites. A customer who carelessly orders a “glass of pinot,” for instance, will be rewarded with an Italian pinot noir from the shoulders of the Alps. And — remember how fun Sassetta is? — wine-by-the-glass pours can get very generous, so much so that buying a bottle or an underwhelming Aperol spritz ($10) is not nearly as wise.

We only fell in love with one dessert, a creamy lemon layer cake ($9) topped with pine nuts and rosemary. Others failed to impress, including a $10 huckleberry pie with good flavor but a thick, overly buttery crust; a decent $8 cup of chocolate pudding; and a $3 scoop of “buttermilk vanilla” gelato that tasted a whole lot more like ice cream than gelato.

But neither average desserts nor overstuffed appetizers are enough to dissuade us from liking Sassetta. It’s a good neighborhood spot with terrific Italian wines by the glass and elegantly prepared pastas and pizzas. A glass of Etna rosso, a bowl of pappardelle, a crisp-crusted slice of clam pie — life doesn’t get much more fun than that.