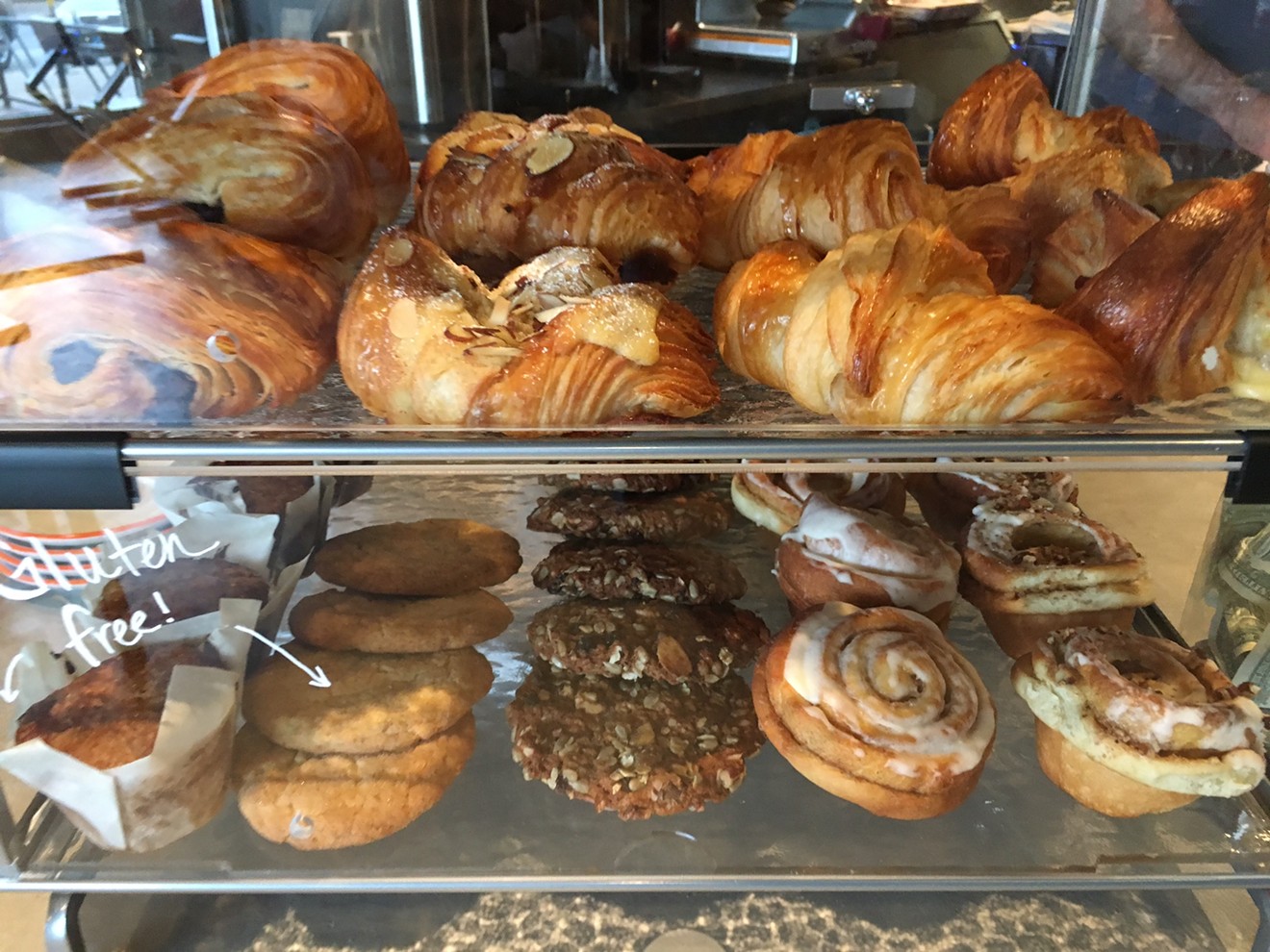 Trail Mix Cookie aside, all pastries sold at Cultivar Coffee's Oak Cliff location are sourced from La Casita, a new business launched by Small Brewpub's pastry chef, Maricsa Trejo. Tim Cox
Since December of last year, Maricsa Trejo has been keeping the dessert menu at Small Brewpub interesting with beautifully plated dishes combining classic concepts with creative ingenuity. These days, desserts for the Oak Cliff brewpub aren’t all she’s baking up in Small's Kitchen: Trejo is now renting out a portion of the kitchen for her new brand La Casita Bakeshop.

“I've always wanted a place of my own,” Trejo says. “My boyfriend pushed me into the concept after two years of listening to me talk about how much I'd love my own bakery. Something about baking and being able to connect with whatever community you land in was exciting. I long for a retail space, but for now, it'll just be wholesale baking until I can afford the luxury of a store front.”

Starting as a line cook and eventually working through every station in a traditional American kitchen, Trejo has worked hard to get to where she is now. Starting at Texas Spice in the downtown Omni, Trejo eventually found herself wanting more out of her kitchen career and transitioned to Oak in the Design District. It was during her time at Oak, crafting salads, that she was tasked with helping then-pastry chef Lucia Merino for a couple days. This “couple of days” led Trejo to discovering her love for baking, and ultimately, a career change.


I try and look at food as not only something I can sell, but something we all need to live.

“Baking was never something I wanted to do,” she says. “I would roll my eyes in pastry class because everything took so long. Years later, I found out how much I loved making the last thing people eat.”

After becoming co-pastry chef at Oak, Trejo took her talents to New York City where she worked under her “pastry idol” Stephen Collucci.

“He instantly became my favorite boss,” she says. “From teaching me how to organize myself to how to make a mean plate, he was everything I imagined. He changed my whole outlook on pastries.”

Trejo’s journeys would take her to Portland for a stint baking for Grand Central Baking Co., where she learned about bread, and to Puerto Rico, where she once again worked with her mentor Lucia Merino, before returning to Dallas. In her time at Small, she has focused on tasks from curating a menu of beautiful desserts to developing the buns for the brewpub’s new burger.

“I like being the person who makes people want to actually order desserts,” Trejo says. “My desserts are simple, balanced and fun to look at. I personally love making small, delicate desserts, and with a name like Small, it seemed appropriate.”

This chocolate croissant and almond croissant prove Trejo's pastries are as gorgeous as her dessert plates at Small Brewpub.
Tim Cox
Trejo is currently reworking the dessert menu at Small and has no immediate plans to leave the Oak Cliff restaurant, but one days, she says, she'd love to own a bakery.

“I want to move out of Small soon and let them have their space back,” she says. “I am looking forward to new accounts through the bakery and saving up for my own retail store front. Everything is up in the air for now. The past as taught me to work toward the future but expect some curve balls.”

Right now, La Casita’s pastries can be found at Cultivar Coffee’s Oak Cliff location right next door to Small, and at Rosalind Coffee in Garland. Current offerings include airy, well layered croissants that are soft but perfectly flaky and have a delicious bready taste. These croissants aren’t just butter-bombs like other local croissants; they can also come filled with a substantial amount of chocolate, savory Swiss cheese and salty ham, or an almond variety that is rich and nutty but not overly sweet. She's baking up a variety of cookies as well, from chocolate chip to snickerdoodles, cinnamon-rolls and muffins. She'll expand offerings as her company grows.

“I love working with the coffee shops, and doing wholesale baking has made me put myself out there more,” Trejo says. “I am comfortable with baking and saying hello, but meeting with people and business is not my strength. Alex, my boyfriend, is the business part of the bakery. It's been challenging and rewarding to talk to people and make a connection. I'm growing as a person and as a business owner.”

Other plans for the future include a program geared toward getting pastries into food banks and shelters, an idea inspired by the large amounts of food waste Trejo has witnessed throughout the restaurant business.

“I try and look at food as not only something I can sell, but something we all need to live,” she says. “My approach to baking is the same as anyone else, the only difference is I don’t take what I do as if I can save lives with it. I’m humble and I want to teach others to bake.”