Six Dallas Taco Spots That Blew Our Minds at Tacolandia

Tortas Insurgentes definitely earned the Most Interesting Taco win. Melissa Hennings
The fourth annual Dallas Observer Tacolandia took over the Dallas Farmers Market on Saturday, and 3,000 people filled the market to feast on tacos and tequila. It started as a gloomy fall day, but just before VIP opened, the clouds parted and God shone his blessing down on Texas in the form of nearly 50 different tacos for the taking.

This year's lineup was stacked: Revolver Taco Lounge, Beto & Son, Arepa TX, La Nortena and other taquerias served up as many as three or four different tacos (or, in one case, bags of taco-flavored chips). This year's judge roster was stacked, too: Jimmy Contreras, owner of Taco y Vino in Bishop Arts; Anastacia Quinones, whose modern Mexican food pop-ups are drawing crowds across Dallas; Brian Luscher, chef-owner of the Grape and noted expert in judging things; and, well, me, tagging along and soaking in Luscher, Quinones and Contreras' decades of taco acumen.

OK, so we probably say this every year, but this time we mean it: This year was the best yet. Like a roving gang of stable geniuses, the judges started off strong with goat tacos from Cabrito Los Cavazos, which we promptly awarded Best Traditional Taco. This new Northwest Dallas restaurant is the city's first whole goat-roasting operation, and this meat was impeccable: simple, uncomplicated and flavorful, just like their chosen cooking method.

Resident Taqueria's showing was so impressive, they won twice: in Best Beef Taco and Best Vegetarian Taco. There weren't many veg options this year — though we did spot a nopales taco or two — but Resident's Brussels sprouts taco was so good, it didn't matter that it was meat-free. And that beef belly taco might have brought a tear to Luscher's eye. 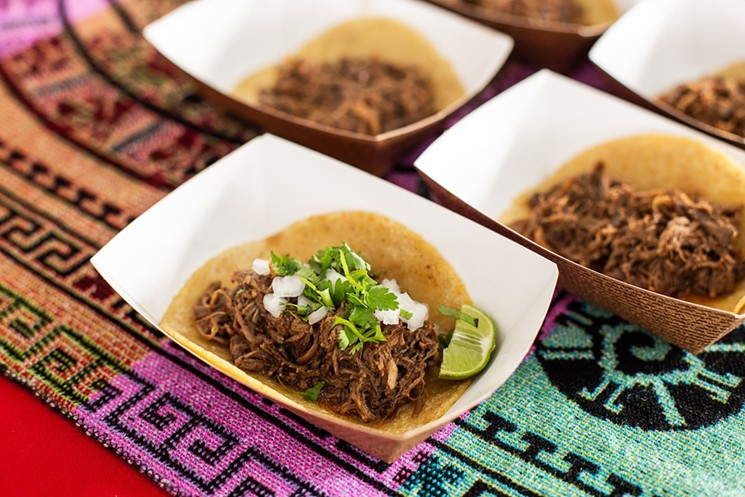 We're not gonna lie: Trompo was a definite contender in the Best Beef Taco category.
Melissa Hennings
One taqueria that really blew us away: Tortas Insurgentes, a Love Field-area torteria that made mind-blowing chicken and chicharron machetes; these incredible quesadillas with perfectly melty cheese and a crunchy exterior turned into one of our favorite bites with a dab of crema and some crisp greens. There was no avoiding awarding Tortas Insurgentes with Most Interesting Taco.

And then there was Revolver Taco Lounge, aka chef-owner Regino Rojas, aka the Kanye West of the Dallas taco scene, if Kanye West was frozen in time at Graduation and 2018 never happened. Rojas is a cocky guy who's not shy about speaking his mind — but he's got the chops to back it up, and on Saturday, he displayed what we can only describe as some serious big taco energy. Set up in the corner of the VIP area, Rojas easily took home Best Overall Taco for a completely ludicrous, completely amazing filet taco topped with foie gras. Foie gras. It was so rich, ridiculous and over-the-top — and so Regino Rojas. He served three tacos — one a beautiful gyro-like creation made with lamb — and every one was a winner.

Taco Diner took home this year's People's Choice win with a chicken tinga taco, guisado-style and slow-braised with morita chiles and topped with bright, happy queso fresco. Their salsa options — creamy serrano and salsa pequin — were popular with Tacolandians, too.

There was one taqueria that didn't win anything, but definitely deserved to: Tortilleria la Norteña. This storied Oak Cliff tortilleria was making tortillas on site — which is as beautifully extra as it gets — and filled them with a super simple but completely incredible barbacoa that melted in our mouths and made us bark, "Hey Siri, remind me to go to Oak Cliff for tacos at Tortilleria la Norteña this week."

There's a lot to love about Tacolandia — blood orange margaritas, for one — but by far, the best part about this annual taco fest is the opportunity to shake hands with taco-slingers and walk away with a shortlist of new locally, independently owned restaurants to hit up.
KEEP THE DALLAS OBSERVER FREE... Since we started the Dallas Observer, it has been defined as the free, independent voice of Dallas, and we'd like to keep it that way. With local media under siege, it's more important than ever for us to rally support behind funding our local journalism. You can help by participating in our "I Support" program, allowing us to keep offering readers access to our incisive coverage of local news, food and culture with no paywalls.
Make a one-time donation today for as little as $1.