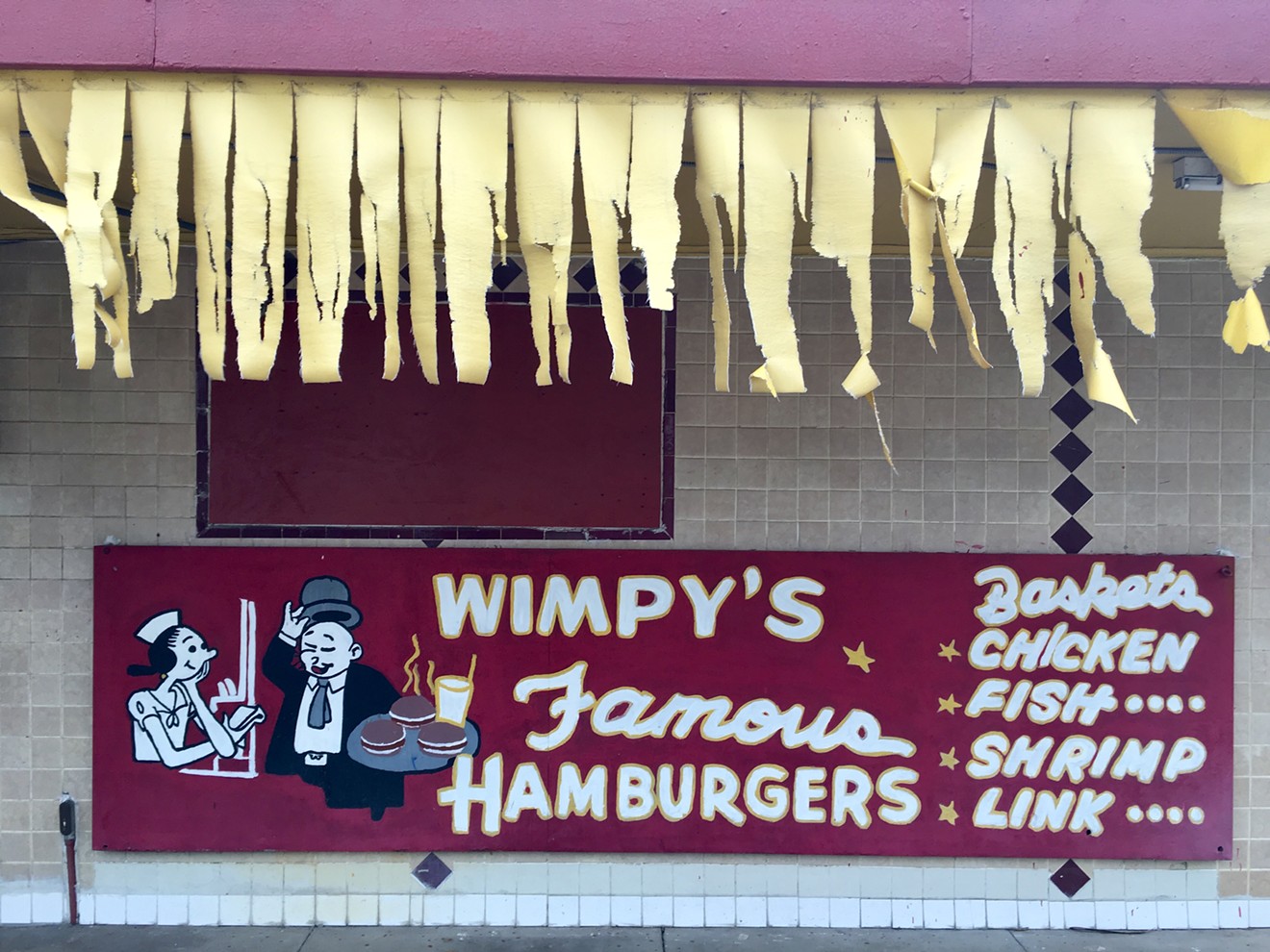 Eating in your car at Wimpy's, West Dallas' decades-old cheap burger joint, is a pure thing. Nick Rallo
All-American is a series that looks at beloved, longstanding North Texas eateries and examines their histories while exploring how the food has changed — for the good or bad — over the years.

The wax paper carrying the tater tots is translucent. Grease spatters the bottom of the brown paper bag, and music blares so loudly it crackles over the small speaker in a rusted corner of the building. The yellow, shredded strips that hang from the front of the building do “the wave” in the wind, and steam rises from a bacon cheeseburger with extra pickles.

It’s a miserably ice-cold and gray day, but at Wimpy’s Old Fashioned Hamburgers, there’s nothing but true happiness felt while sitting at their ramshackle, two-top table hunkered up close to the order window. It’s the only place to sit, and it’s the only one needed.

Eating in your car is fine at Wimpy’s. No one will judge. The bacon’s fried to crisp, the American cheese perfectly melted, and tater tots are crunchy and golden and handed through the short-order window. This is warm, workhorse food. As I'm wheeling up the radio and sit with a cheeseburger — the well-done kind, seared until it has a crust on the flat grill — a sense of utter relief washes over me. It’s beautiful that Wimpy’s is still with us in a city that sends wrecking balls through pieces of history seemingly every week.

Wimpy’s serves the kind of hamburger that’s meant to do little more than feed you a hot meal. You’ll get nothing more than the original burger — the one that’s meant to satisfy you in between shifts of life. It’s inexpensive, crisp and salty, and you’ll need two hands. Nothing about it is organic. It’s cash only — a hamburger is $3 — and your food is cinched up in a paper bag. When you're speeding down Singleton on the outskirts of downtown, Wimpy’s is the one painted with ancient cartoon characters, like hieroglyphs of the television past, and it’s been there at least 50 years.

And time ticks away.

A bacon cheeseburger with onion, lettuce and tomato for a little more then three bucks. Bring cash.
Nick Rallo
About 13 years ago, Gutierrez and her mother, Lupe Zarate — owners of a little outlet for carnitas tortas burgers and hot dogs called Dog House down the street — took over Wimpy’s. It had been closed for a year and change after almost 40 years of slinging cheap cheeseburgers on Singleton, so they snapped up Wimpy’s and reopened it without changing much.

Once Wimpy’s was in their hands, Zarate and Gutierrez brought a homemade ice cream recipe to the mix, and they added a junior burger. Still, you’ll find the same fish sandwich you could have ordered in 1970. Fried fish comes with no more than lettuce, tomato, and a mixture of ketchup and hot sauce.

“You stay over there, and I’ll stay over here,” Gutierrez says she asked of her mother, meaning Zarate would manage a reopened Wimpy’s and Gutierrez would shepherd the Dog House at 1318 Singleton. Gutierrez owns both while working full-time at a mortgage company.

“Even in the cold, we still sell ice cream,” Gutierrez says.

It’s easy to imagine why: Wimpy’s is a low flame of nostalgia, warming your hands with food that’s astonishingly, refreshingly pre-any trend that’s around. Burgers and fish sandwiches aren’t on the menu because they’re cool. They are there because they feed you, and Zarate knows how to execute it, inexpensively, to satisfy your craving. Do not swing into Wimpy’s expecting beef juices running down your wrist from some hidden, farm-to-table gem. It's not hidden. It's just an antique gem.

You go for a hot meal, crisp tater tots, maybe a slice of bacon on your burger or chili dog, eaten on a brisk patio with a bottle of Coke. Wimpy’s is a taste of the past — and a hopeful future in which mom-and-pop shops still thrive on the food that’s worked, no matter the trend, for decades.