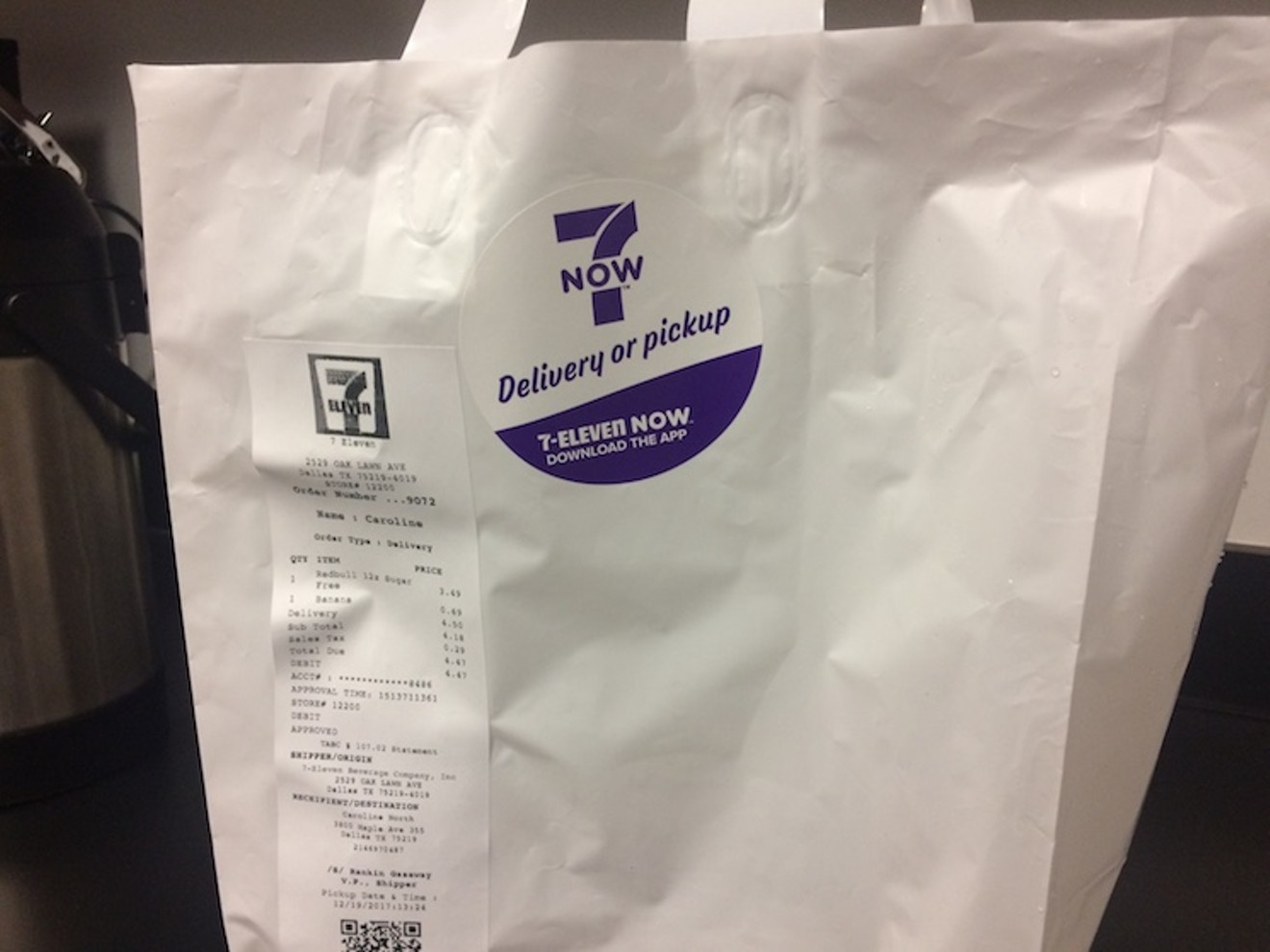 Caroline North
The printing press. Penicillin. Airplanes. These are just a few of the life-changing inventions the modern world has produced. 7-Eleven's addition to that list: 7Now, an app that delivers goods from your favorite Dallas-based convenience store right to your desk or couch.

The free app, which allows customers to place an online order for delivery or in-store pickup, is being tested in 10 stores in Uptown and downtown Dallas before it's rolled out nationwide next year. It can be downloaded from Google's or Apple's online stores.


"Our company was the first to offer coffee in to-go cups, operate 24/7 and provide a self-serve soda fountain." – 7-Eleven President and CEO Joe DePinto

"7-Eleven has a legacy of innovation," Joe DePinto, the company's president and CEO, said in a press release announcing the app. "We have been pioneering new trends in the convenience industry for 90 years. Our company was the first to offer coffee in to-go cups, operate 24/7 and provide a self-serve soda fountain. 7-Eleven will always look for innovative ways to reach and excite our customers and maintain our leadership position in convenience retailing. Today, that means redefining convenience through digital innovation."

Yesterday afternoon, the Observer gave 7Now a whirl at the its offices, which are both next door to and across the street from 7-Elevens. (Some of the Observer staff's diet consists primarily of hot dogs and Hostess cupcakes. Is there a medical term for a combination of malnutrition and obesity?) At least two staffers — either of whom we could have bribed to pick up a banana and a sugar-free Red Bull — made independent trips to the store in the time it took to place and receive our order, but hey, the first delivery is free.

When users open the app, they're asked whether they want pickup or delivery. The selection of items available for delivery was satisfactory but limited. Since the delivery driver gathers the items at the store, you'd expect the store's entire inventory to be available for purchase. Instead, there about a dozen items available under nine categories: food, bakery, beverages, alcohol, snacks, candy, frozen treats, health and mobile accessories. The app did not list cigarettes or lottery tickets for delivery, which is a bit like The Louvre neglecting the "Mona Lisa" from its catalog.

Jim Schutze requested an orange soda. Fanta, not Sunkist. Not only was there no Fanta, but there was no orange soda of any brand. (Incidentally, this is what Wikipedia says about the history of Fanta, a Coca-Cola brand: "Fanta originated as a cola substitute as a result of difficulties importing Coca-Cola syrup into Nazi Germany during World War II due to a trade embargo." Isn't that interesting?)

Caroline North
The app placed the order with the closest participating 7-Eleven. During the wait, which was estimated at 37 minutes, 7-Eleven sent a lot of cool notifications, saying things such as, "OMG your order is almost ready. Are you as excited as we are?"

OMG, were they excited?

At the time the delivery was due, a call came from an unrecognized number. "Hi, I'm from Postmates, and I'm in the lobby." 7Now is just the Postmates app with a 7-Eleven interface. We met the delivery driver in the lobby of the building (we provided our suite number, but it seemed like this was expected) and were somewhat embarrassed to retrieve our small order. Since there was no delivery fee, it came out to $4.36.

The Red Bull had been slapped with an order label and was still plenty cold, and while it can take some effort to find a decent apple or banana at 7-Eleven, the banana delivered was perfectly ripe and mostly free of bruising.

Conclusions? It's not that useful. The Postmates app will deliver goods from many stores, and the group that needs this service seems pretty small.

7-Eleven has more locations than any other convenience store in the world; most smartphone users are within a few blocks of one at any given time. As for the in-store pickup option, where you pay in advance and grab your order at the register, how long does it really take to gather a few items at 7-Eleven? (Actually, the answer depends on whether the person at the head of the line is buying some weirdly specific set of lottery tickets. That takes days.)

If 7-Eleven is hoping this will be its new to-go cup, the company should head back to the drawing board. But if you're curious,  drunk, or, for some other mysterious reason, in need of a pizza, packet of aspirin or phone charger from 7-Eleven and can't be bothered to visit a store, the service works.