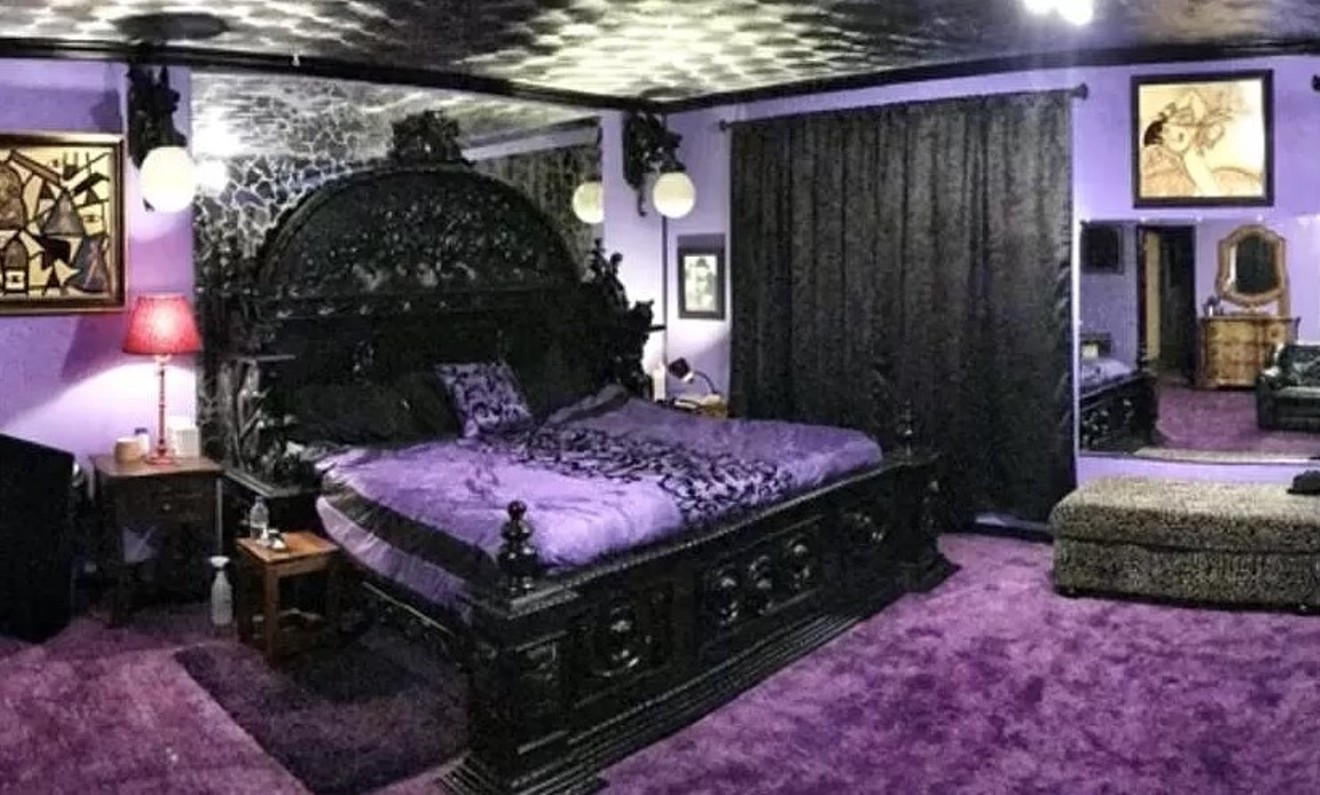 Colorful spaces like this purple bedroom have made the Zillow listing for the Oak Cliff home a viral hit. Michael Rouyre
A house for sale in Oak Cliff looks like a typical, midcentury modern, brick home — at least from the outside. Step through the front door, however, and you'll find something far from typical.

The 5,231-square-foot home on Mystic Trail with four bedrooms and four bathrooms is a colorful dwelling with purple walls and carpets, retro wallpaper and metal ceilings. The home went up for sale on Zillow, where it's been viewed at least 100,000 times and shared all over places on sites such as Facebook. A video tour of the house on YouTube hosted by its owner also has attracted plenty of online traffic.

"It's just been blowing up all over the Internet," says Realtor Cyndi Reep of Berkshire Hathaway HomeServices Alexander Chandler Realty. "It's appearing everywhere."

The house belongs to husband and wife Robert Moseley and Rachel Flowers, the former better known as Videobob, the owner ofs Bob's Prop Shop in Duncanville. Moseley’s shop makes, sells and rents full replicas of props and cars such as the proton packs from Ghostbusters, Doc Brown's Delorean from Back to the Future and the Mystery Machine from the Scooby-Doo cartoons. Moseley and Flowers put the home up for sale when they moved to Las Vegas to open a second location for the movie car and prop shop. He says he's bewildered by the viral response to their former Oak Cliff home.

"They live in a world where they want to get their rental deposit back," Moseley says of renters. "Paint costs the same amount of money no matter what color it is. You can go in and express yourself how you like by changing the carpet or walls and it doesn't cost any more money. You just gotta be brave enough to do it." 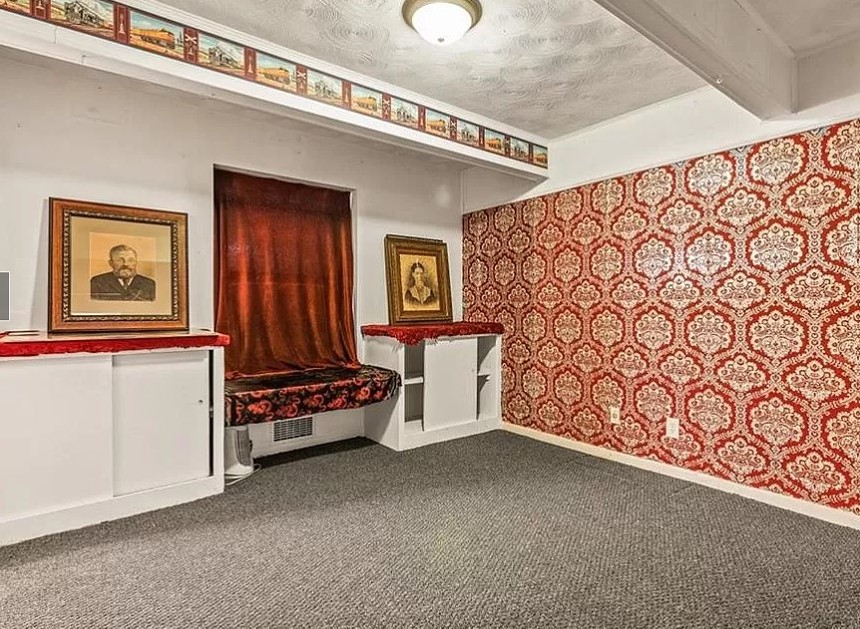 The home's current owner Robert "Videobob" Moseley says they kept a lot of the home's original 1960s style wallpaper to contribute to their eclectic plans for the interior.
Michael Rouyre
The Moseleys moved into the place in early 2010 and decided the interior could use a new look. They kept some of the original '60s-style wallpaper but they "decided to add to it with a little bit more flair," Moseley says.

Their bed has a large, black, Gothic frame, which they matched with purple walls and a chrome ceiling. The walls in the large living and gathering areas are in red and the ceiling is covered with gold tiling. The room also has buffet-style tables and a wet bar made for holding big parties.

One of the most eye-catching features of the main room is the dance pole. Moseley and Reep say the pole is for Flowers, who works as a fitness trainer and instructor for the YMCA and teaches pole dancing in her exercise classes.

Other features of the house include a huge room for a movie theater with a 12-foot-tall retractable screen that can be converted into a stage for live bands. The house also has plenty of parking. Moseley says the house was made for parties and gatherings, which have never bothered the neighbors.

"It was not uncommon to have over 100 people over there," Moseley says of his parties. "We would hire a bartender and a chef and have a band and no one would ever complain. We never disturbed the neighbors. The cops never showed up, and we have no HOA. Somehow we got away with it. You can make all the noise you want and nobody hears it or nobody cares."

The brick home's colorful style attracted a lot of interest and chatter online with jokes like "you needed a safeword to get in there," Moseley says.

"We're looking for just the right person who can appreciate all of this kind of space and the style," Reep says. "He says there's a person out there just like him. We just have to find that person."

Moseley says the home's original style contributed to the many fond memories and moments of his former Dallas home. It's one of the most important reasons he and his wife decided to do with purple and red paint instead of boring beige and white popcorn ceilings.

"I was just thinking about our happiness," Moseley says. "My Vegas house is the same now."