Park & Palate returns to Klyde Warren Park on Saturday. Kathy Tran
Friday
Reckon with Dallas’ spooky past this Halloween season during Dallas Trolley Tours’ Haunted History Tour, which rolls through some of Big D’s most dreaded, despairing sites beginning at 7 p.m. Fridays from through Oct. 27. Trolleys have plenty of tricks and treats up their sleeves as they wind their way among historic locations believed to house paranormal activities — including a notoriously spooky house and a creeptastic cemetery. Grit your teeth and steel those nerves as you dismount the trolley and experience walking tours of supernaturally enhanced sites. Each tour departs from the Dallas Farmer’s Market, 920 S. Harwood St., and lasts 90 minutes. Tickets are $34; search the event on Facebook for more information. Dallas Farmers Market, 920 S. Harwood St., 7 p.m., $34, see Facebook. – Jennifer Davis-Lamm

For horror film buffs who buy their tickets in advance, this Friday the 13th double feature at a drive-in theater offers a chance to see two of the greatest slasher flicks of all time for $3 in the comfort of your own vehicle. Bring along a carload of friends, family or fiends to re-ignite the never ending debate about which infamous lead character from a horror franchise has the best introduction in their first movie. This usually comes down to an argument about whether Halloween (which is not screening), Friday the 13th or A Nightmare on Elm Street is the better kickoff for the “big bad’s” series of sequels. No matter how you slice it, audiences love Freddy Kreuger, Jason Voorhees and Michael Myers, who all scared their way into the Top 10 on Forbes’ 2016 list of the 13 highest-grossing horror film franchises. And, speaking of slashing, tickets typically cost $8 for movies at Coyote Drive-in Theater & Canteen, 1901 Midway Road in Lewisville, but Friday’s a $3 double feature of Friday the 13th and A Nightmare on Elm Street. Visit the event’s Facebook page for tickets. Coyote Drive-In, 1901 Midway Road, Lewisville, 7:40 p.m., $3, see Facebook. – Daniel Rodrigue

If you don’t mind being tricked or can suppress the urge to figure out how they did that, check out the Champions of Magic show at 7:30 p.m. Friday at Arlington Music Hall, 224 N. Center St. This touring showcase features five of the greatest artists in modern magic performing some mind-blowing illusions that have been seen on stages around the world and TV shows such as Caught on Camera with Nick Cannon and Penn and Teller: Fool Us. Tickets range from $20 to $125 for adults and $10 to $115 for children 12 and younger and can be purchased at arlingtonmusichall.tix.com. Arlington Music Hall, 224 N. Center St., 7:30 p.m., $20-$125, arlingtonmusichall.tix.com. – Danny Gallagher

Eddie Izzard has a lot of new developments to talk about — well, joke about, if this were an ordinary Izzard tour — since his last time in Dallas. The English transgender comic hinted about an intent to run as the Labour Party candidate for mayor of London, then suggested he’ll run for Parliament in the 2021 election instead. Izzard finished 27 marathons in 27 days last year for the charity Sports Relief — a whopping achievement for anyone, particularly a 55-year-old. But don’t expect a standard set from the comedian-monologist for this appearance. He’s promoting and reading from his new book, Believe Me: A Memoir of Love, Death, and Jazz Chickens, with audience questions, discussion of his life and sharing of personal photos in addition to some stand-up material. He performs at 8 p.m. Friday at the Majestic Theatre, 1925 Elm St. Remaining tickets range from $45 to $60 and are available through Ticketmaster. Ticket prices include a copy of the book. Visit majestic.dallasculture.org. Majestic Theatre, 1925 Elm St., 8 p.m., $45-$60, majestic.dallasculture.org.– Jesse Hughey

For more than five decades, musical polymath Herbert “Herbie” Hancock has been a constant element of America’s musical landscape. His experimental style of jazz-funk fusion was born at a young age; Hancock was hailed as a child prodigy for his ability to tickle the ivories. The 14-time Grammy winner has left his mark on everything from electro- hip-hop to the post-pop era of jazz he helped usher in alongside Miles Davis. Today, Hancock, aged 77, is a living legend of jazz. With hints of a possible 42nd studio album and his 2017 tour, this won't be the kind of show you go to out of respect for an artist's former glory; Hancock is still at the cutting edge, as proven by a recent collaboration on Flying Lotus' album You're Dead. Luckily Dallas won't have to take my word for it when Strauss Square rings with the sweet sounds of jazz. Strauss Square, 2403 Flora St., 8 p.m., $39.75, attpac.org. – Nicholas Bostick

Come celebrate Armenia, everyone's favorite former member of the Soviet republic, at Armeniafest. For those of you who appreciate elements of other cultures besides food, there will be folk dances, art exhibits, music demonstrations and more. For those of you who like to push past the dancers, musicians and art to get to the good stuff, here's the rub: cheese boerek, lahmajoun (a minced meat topped flatbread), kofta, dolma and lots and lots of baklava will be available for purchase. Also of note is the pilaf eating contest, held at 4 p.m. on Saturday and Sunday. Admission and parking are free. St. Sarkis Armenian Church, 1805 Random Road, Carrollton, Friday-Sunday, free, armeniafest.com. – Kathryn DeBruler 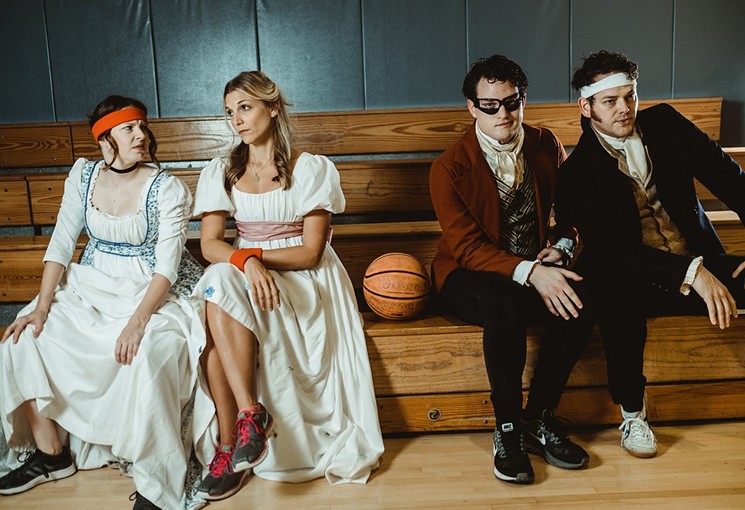 See Pride and Prejudice at WaterTower Theatre
Evan Michael Woods
Saturday
Certain members of the Observer staff would be inclined to say something snarky about the Plano International Festival, whose tagline is “explore the world in a day.” Ignore them. Some members of our staff consider anyplace north of Mockingbird Lane as something akin to Timbuktu, only filled with vanilla people. Those of us who live in Plano know that the booming city is a melting pot of cultures drawn by lucrative jobs in technical industries. So where else better in DFW to celebrate the food, music, dance and art of more than 100 cultures from around the globe? The festival includes a children’s village and a screening of the film Song of Lahore, a documentary that follows a group of Pakistani musicians as they travel to perform at New York’s Lincoln Center. The film screens at the Courtyard Theater, 1509 Ave. H, at 2:30 p.m. Saturday and includes live musical performances and a panel discussion.. The festival itself takes place at Haggard Park, 15th Street and Avenue H in downtown Plano, from 11 a.m. to 5 p.m. It’s free to attend. Suggested donations for the film are $15 for adults and $10 for children. Visit planointernationalfestival.org for more information. Haggard Park, 15th Street at Avenue H, Plano, 11 a.m.-5 p.m. Saturday, free, planointernationalfestival.org. – Patrick Williams

She was abandoned by her mother at birth, raised in a brothel by her grandmother, went temporarily blind from meningitis at age 3, lost a daughter to the disease, suffered several serious car accidents and struggled with drug and alcohol problems before dying at age 47 of cancer. So it seems a little odd that two of renowned chanteuse Edith Piaf’s best known songs are “La vie en rose” (Life in Pink, or through rose colored glasses) and “Non, je ne regrette rien” (No, I Regret Nothing). See the story of Piaf’s life and hear her songs as Anne Carrere performs Piaf! The Show at 8 p.m. Saturday at the Eisemann Center, 2351 Performance Drive in Richardson. Tickets are $39 to $57 and can be purchased at eisemanncenter.com. Eisemann Center, 2351 Performance Drive, Richardson, 8 p.m., $39-$57, eisemanncenter.com. – Patrick Williams

It’s been more than a decade since the proto-alternative, volcano-powered guitar-rock outfit Dinosaur Jr. reunited. In fact, they’ve been reunited for longer than they were together in the first place — reason enough that it should feel weird to even call their latest iteration a reunion. But what really makes it feel strange is that modern Dinosaur Jr. might be better than they ever were to begin with. They’re louder and more sprawling than ever in the studio, too, yet they still sound exactly like Dinosaur Jr. Their latest, Give a Glimpse of What Yer Not, which could safely take You’re Living All Over Me’s place in 1987 without any significant disruption to the time-space continuum. Granada Theater, 3524 Greenville Ave., 8 p.m., $39, granadatheater.com. – Elliot Wright

Sunday
Facing problems in your family, your marriage, your finances? For two hours, turn your attention to — what else? — family, marriage and money troubles in Watertower Theatre's regional premiere of Pride and Prejudice by Kate Hamill, adapted from Jane Austen's novel. Joanie Schultz directs the show, which kicks off the season and runs Friday through Nov. 5 at the theater, 15660 Addison Road in Addison. For information and tickets, call 972-450-6232 from noon to 6 p.m. Tuesday through Friday or visit watertowertheatre.org. Or pay what you can at 2 p.m. Sunday. Three good reasons to drive up the Tollway for this event: John-Michael Marrs, cast as the uppity Mr. Darcy, and the Bennet daughters' parents, Bob Hess and Wendy Welch. WaterTower Theatre, 15660 Addison Road, Addison, through Nov. 5, $35, watertowertheatre.org. – Reba Liner