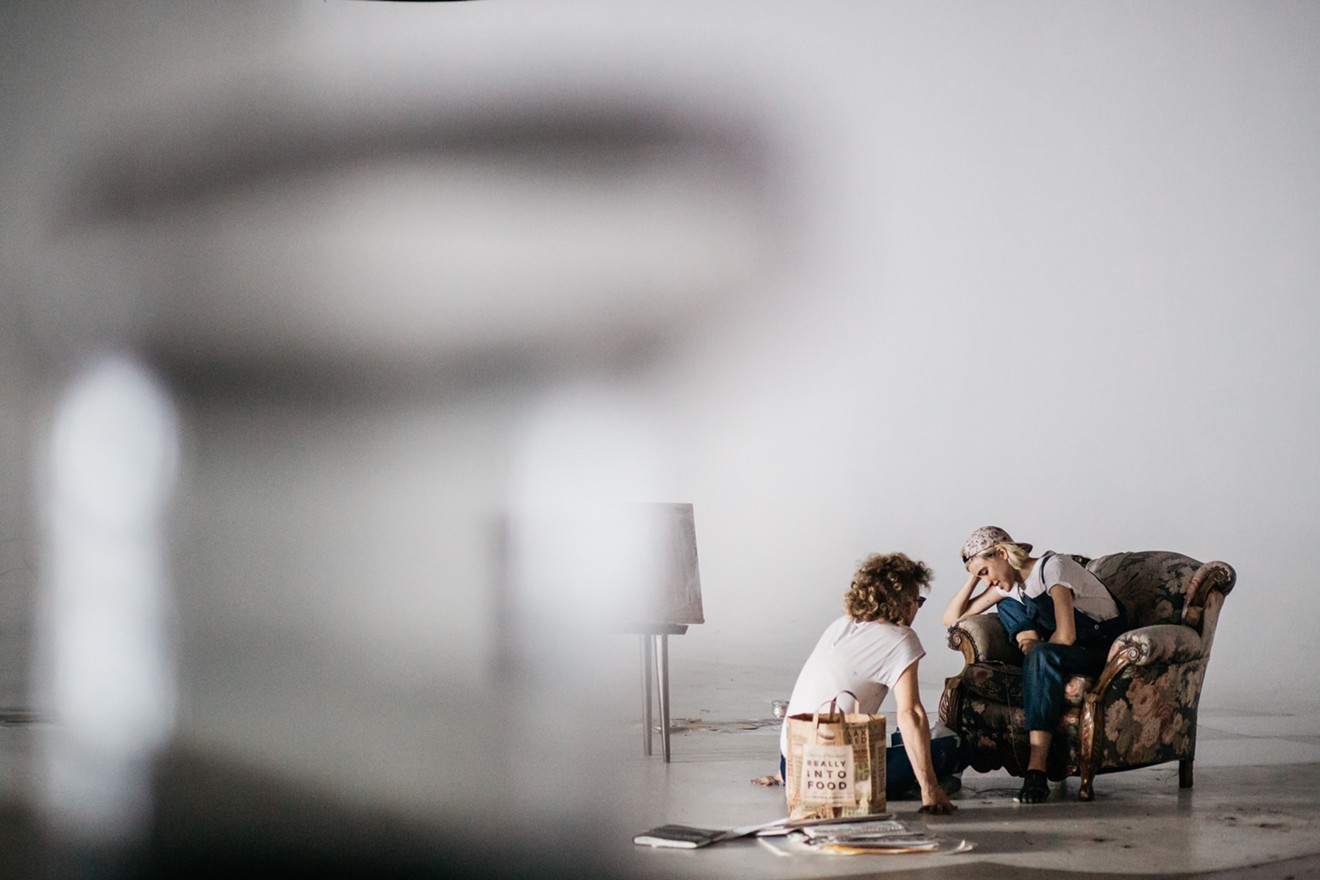 Matthew Brinston and Marie Boone drove to Vegas on a whim after a month of dating. After marrying, they moved into an Expo Park warehouse, where they live rent-free in exchange for spiffing up the joint with their artists' touch. Rico DeLeon
For creative duo Marie Boone and Matthew Brinston, their relationship is finally coming full circle. Art was the reason they got together in the first place, and ultimately the reason they got married. The 22- and 24-year-olds are about to celebrate their first anniversary. They said their vows in Vegas nearly a year ago, only a month after they officially started dating.

They’d been wanting to do a collaboration since they first got together, but never had the opportunity until now. On Friday, April 14, they’ll be opening a show of their work — Brinston’s paintings and Boone’s sculptures — at their temporary live/work space in Expo Park they dubbed “Vacation Studio.” Brinston will also be doing live drawings of models styled by Boone at the reception.

They met accidentally in Dallas after Boone, a Houston native, had relocated from Los Angeles for her modeling career. She’s the drummer in a band called Lizzie Boredom and was throwing house shows at her place. A mutual friend recommended she connect with Brinston, a painter, to show some of his work. She spotted him at The Free Man one night and struck up a conversation.

“I was like, ‘Ey, you’re that artist guy.’ He’s pretty recognizable,” Boone says of Brinston’s signature blond curly mane that’s shaved on one side. They ended up being neighbors, had a lot of mutual friends and were spending more and more time together.

They went from friends to more than friends over the span of about six months, but Brinston still had a hard time persuading Boone to take their relationship seriously. Boone had just parted ways with a boyfriend and didn’t want another one.

“The whole point in the beginning was to be able to create together. That’s how I asked her to be my girlfriend,” says Brinston. “Yeah, that’s how he convinced me to finally date him,” Boone jumps in. Brinston says, “I just wanted to make each other’s dreams come true.”

Their artist residency developed out of a neat partnership with Grant M. English of Venture Commercial Real Estate. In addition to being a commercial real estate broker, English is also an artist, musician and collector of Brinston’s work. He agreed to allow Brinston and Boone to use the 7,500-square-foot space at 404 Exposition Ave. as their home base in exchange for the couple livening up the empty multi-million dollar property.

It’s mutually beneficial because the artists’ presence provides a built-in marketing effect. The duo will make work and throw events that the real estate company will invite potential tenants and investors to.

“I love Brinston, and love his work, and want to help him make money,” English says. “We’re creating some exposure for him and for us by generating activity in the space. We’re reflecting the nature of the neighborhood, which is a creative market.”

There’s no move-out date for the pair; they’ll stay until it’s rented. The concept is something English plans to replicate across other markets in the Cedars, downtown, the farmers market, Design District and East Dallas.

Rico DeLeon
The opening is going to be a monumental night for the couple, who already have followings and a large network in Dallas. Brinston is repping himself for the first time at this show. He’s been on the scene since 2014; painting was his therapy after he was in a traumatic motorcycle accident and died on the operating table during brain surgery. His signature coif — shaved on one side — bears the scar from the ordeal.

Since picking up painting, he’s had a successful run and at a young age. He has a cult following among creatives in Dallas and makes some of the most sellable work around, showing at {neighborhood}, Art Con, Cattle Barons Ball, Level Gallery, Breda Studios, and Kettle Art. He also occasionally leaves his artwork around town to be picked up by passersby, and he lets his Instagram followers know where they can find it.

Boone is a long-time dabbler in the arts. She skipped college to move to L.A. after her modeling career took off. She was thinking about going back to school for industrial design, but a neighbor taught her how to weld, something she put to use for this show; she’ll be showing her large-scale sculptural work.

“I’ve been making metal structures and acoustic chambers. I’ll probably also do some installations and some concrete work. I’m doing some science stuff with crystals in these concrete structures,” Boone says. “It’s so fun and so satisfying to do things with your hands and get dirty.”

The pair are living the creative dream in a multi-million dollar space, free of charge; hence the name Vacation Studio. Neither has a day job, so they get up and go into the studio to make art and break to hang with friends and go to photo shoots and band practice.

“We try to get up early, get dressed in our ‘work uniforms’ and go do messy shit with our hands,” Brinston says. “It’s just so fun,” Boone adds. “It feels like a real job, almost, because we wake up and work all day until the sun goes down. If we need help or an opinion on a painting or a sculpture, it’s so cool having a partner like that [who’s right there]. It’s something special.”

It sounds like a fairy-tale setup, which perfectly matches the fairy tale story of how they got together. If there was ever a liberal, punk-rock, art anarchist version of the perfect love story, theirs would be it.

After officially becoming a couple last April, the pair took a trip to Colorado. It was during a hike in the mountains they came across a small chapel. Brinston went back to the hotel to grab art supplies, and Boone waited outside the church. Despite only dating for a month, the same thought hit both of them separately: “We should get married.”

While Boone was waiting she met an older couple who said they’d gotten married at the chapel. She took it as a sign and shared her plan when Brinston got back.

“She said, ‘We should get married here one day,’ and I was coming to tell her the exact same thing,” he remembers. “I said, ‘Let’s get married yesterday. Let’s go to Vegas.’”

The pair jumped in the car for a 10-hour overnight drive through the desert. Brinston called her dad to ask permission before leaving, and both sets of parents hopped an emergency flight to Vegas, ending up on the same plane sitting right next to each other.

On the eve of their first wedding anniversary they’re celebrating another milestone familiar to many married couples. “We got Vacation Studios, our first child,” Brinston says. “We don’t want kids,” Boone explains. “We want our art to be our kids.”

They’ve had some lucky breaks, including meeting English, who connected with Brinston after finding one of his paintings on the street. The couple has also surmounted some incredible obstacles — together and separately — not the least of which was Brinston’s accident. They’re hoping their story inspires other people to follow their hearts despite the odds.

Brinston explains, “We want to make everybody jump up off their couch and fly to Vegas, metaphorically.”