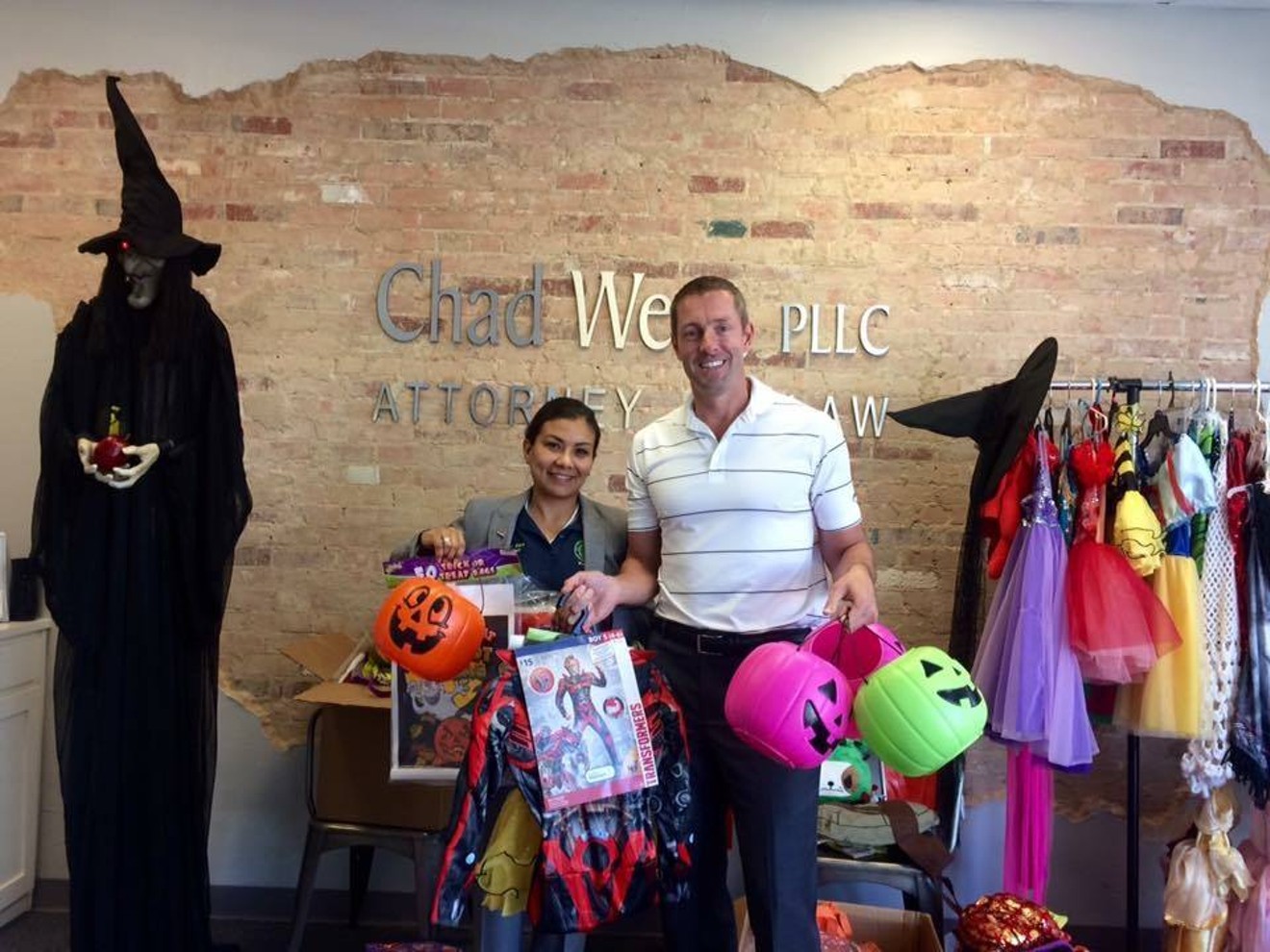 
When your doorbell rings Halloween night, there’s a limitless possibility of what you’ll see. Anything from superheroes to monsters to princesses can be waiting on your doorstep, ready to collect candy. But Dallas attorney Chad West noticed more and more that instead of a famous character, it was a costume-less child with a grocery bag. After seeing so many children with similar situations, West decided to do something about it.

West oversees the Annual Oak Cliff Costume and Bucket Drive, where between Oct. 1 and Oct. 29, participants are encouraged to donate any gently-used costumes, masks and buckets to be handed out on Halloween night. Now in its seventh year, the costume drive has expanded to allow multiple drop-off points for the items. Anyone looking to donate can either ship or drop off items at the Law Offices of Chad West at 3606 S. Tyler St., or Red Pegasus Comics at 319 N. Bishop Avenue. This will be the first year Red Pegasus Comics will participate in the costume drive.

“Pegasus just sort of happened,” West says. “We went to celebrate Batgirl Day, which they are starting to do every year now, and my daughter dressed up as Batgirl, and we went in there and we just ended up talking to them about it and they loved it. So it sort of made sense.”

Alongside Pegasus, West gave a large amount of credit to Judge Sara Martinez, who West said has donated every year and been a large supporter of the cause, and to the organization Raising Oak Cliff for spreading the word about the drive.

The drive started nearly a decade ago, when West moved to a new home in Oak Cliff. Neighbors warned him to be ready for Halloween, as many trick-or-treaters would make their presence known. West thought he was prepared with more than 1,000 pieces of candy, not realizing the average amount a house would pass out was closer to 2,500. Throughout the night answering the door, West noticed a consistent occurrence.


“It was just incredible to me, and sad really, how many kids showed up and they’re just in T-shirts and shorts." – Chad West


“It was just incredible to me, and sad really, how many kids showed up and they’re just in T-shirts and shorts,” West says. “There’s no costumes, they have like a plastic grocery bag for their candy and that’s it. I just remember as a kid, my parents, when I was younger, they weren’t rich or anything, but they were able to pull together Halloween costumes every year and made it something we always remembered. It was such a heart-string thing to see these kids without costumes, so the next year we gathered what we could from the neighborhood, and it’s just snowballed from there.”

West does accept full costumes, but he’s found that masks and buckets are the preferable items to be donated because they are the easiest items to hand out Halloween night. It’s usually darker when the costumes are distributed, and the lack of light and available place to change can make a costume with multiple pieces too challenging for the children.

West does hand out the majority of the collected items on his street Halloween night, but any interested families who would like a costume can call either the Law Offices of Chad West or Red Pegasus Comics to set up a time to drop by. All the donated pieces are stored between the two locations, and West recommends anyone who has the time available to not hesitate in reaching out.

Each year the Costume and Bucket drive has grown larger, and West is thankful for the generosity from both Dallas businesses and residents in making a child’s night memorable.

“People in Oak Cliff I’ve found are very generous, especially when it relates to kids in need,” West says. “As the word has spread, we still give out everything every year. What it’s helped us do, we’ve reached more and more kids. Our first year that we did it, we had somewhere between 100 to 250 costumes. Now we’re getting 750 to 800 items, and we still give it all out. So I would say we want to keep it growing until we max out on all the kids that come by. If we hit a thousand or so costumes and masks, that will pretty much get everybody.”
KEEP THE DALLAS OBSERVER FREE... Since we started the Dallas Observer, it has been defined as the free, independent voice of Dallas, and we'd like to keep it that way. With local media under siege, it's more important than ever for us to rally support behind funding our local journalism. You can help by participating in our "I Support" program, allowing us to keep offering readers access to our incisive coverage of local news, food and culture with no paywalls.
Make a one-time donation today for as little as $1.