What Are Dallas Comedians Doing Without a Stage? Exploring Other Artistic Outlets

Comedian Dave Little has written a new song and worn a new hat every day since the start of the outbreak and shares each one with his Facebook followers. Screenshot by Danny Gallagher
The silence of comedy stages has been deafening.

The coronavirus outbreak has made it hard for comedy venues (and all others) to pack the house for headlining comedians and for local comics to open for traveling acts while working on new material.

"Until we get a vaccine in the majority of people's arms, I just can't perform," says comedian David Jessup, who last performed in March at the Backdoor Comedy Club and was a featured act at all three Hyena's Comedy Nightclub locations.

Some comics have tried showcasing their material online or even holding live shows in open spaces with capped capacities. Others have started exploring different parts of their right brain with their new, never-ending stretches of free time.

"To me, it's all about the creative process and creating something," says comedian Dave Little, who was touring with comedian Ron White before the shutdown forced him to stay home. "I've always been a big believer in the only thing you can control is your output. So I wanted to kind of dumb my life down. With so much stuff going on that nobody can control, what can I control?"

Little says he realized he could still find ways to express and explore his creativity through his other talents. Every day since the outbreak started, he wrote a new song and performed it on his social media channels with his trusty guitar and one of his many, non-metaphorical hats.

Comedian and artst David Jessup in his macabre workshop where he builds his creepy statues he calls "Children of Dave."
Lynsey Hale
"I can control writing something or making something," Little says. "I was hoping and still hope that people, especially my creative friends — whether it's comics, author or musicians — say, 'Yeah, I'm gonna sit down and write something and not let this thing crater in on us. I wanted to keep doing it because that's the most important thing: doing."

Jessup is also a sculptor and artist who builds macabre creations conjured up by the deepest recesses of his mind; he calls them "Children of Dave" and it's something he's been doing for years because of his love of horror and as a tribute to a fallen friend.

"It's a weird thing," Jessup says. "I miss it and don't miss it. What I don't miss is the constant hustle. The hustling in comedy is a full-time job. I don't miss the hecklers. I miss the camaraderie of other comics."

Since comedy has almost been entirely shut down, Jessup's focused his efforts on growing his artistic army of horrific creations for his followers and customers. He's even written a script for a short film that harnesses his creepy artistic aesthetic to tell a twisted story of revenge with his toys as the monster because "you can smash them but they put themselves back together."

"It keeps me busy, it really does," Jessup says. "I'm very lucky in that I'm a comic who had another artistic outlet."

Some comics are still doing comedy but building their own platforms for it. Comedian Kristie Nova started her own Twitch stream at the start of the pandemic with the user name KristieGotJokes where she gets to perform comedy on the fly while playing games such as Among Us, Fall Guys and The Jackbox Party Packs with her audience. 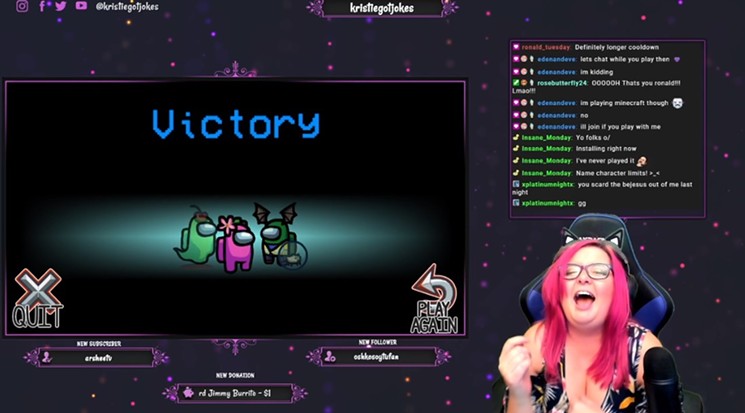 Comedian Kristie Nova celebrates her win in the hidden identity game Among Us on her Twitch stream.
Screenshot by Danny Gallagher
"I tell one-liners a lot," Nova says. "I make up songs on the spot for my viewers on my ukulele. It's a channel point redemption to have me make up a song about them, and they redeem them a lot."

Nova has built an impressive platform in a short time. She's garnered over 1,000 viewers, scored a chance to compete for a spot on comedian Andy Milonakis' Twitch network and received an invite to do a live, in-person partner stream from Las Vegas.

"Twitch has given me a platform to not only have an audience but the reason I've always done comedy is if someone's having a bad day and I can make them laugh for a second, it's the least I can do for them," Nova says.

Comedian Benjamin Williamson also had a talent he wanted to explore on his bucket list: stilt walking.

"It's mostly just for fun," Williamson says. "Although if something came of it, that would be cool."

He bought a professional pair of stilts from eBay and started taking them for a spin in and around his house.

"I love trying new things," he says. "I don't have a fear of hurting myself. I've done dangerous stuff like riding on 40-mile-an-hour scooters and getting on roofs all day for work that I don't think twice about. If I can learn a new skill and pay a minimal amount of money, I feel that's a win."

These new venues and forms of expression aren't just for keeping comedians occupied while they wait for the stages to safely open again for full crowds. It's also about keeping their audiences happy and entertained.

"People need that more than ever being stuck at home," Nova says. "I'm getting the same satisfaction as I would if I were on a stage."
KEEP THE DALLAS OBSERVER FREE... Since we started the Dallas Observer, it has been defined as the free, independent voice of Dallas, and we'd like to keep it that way. With local media under siege, it's more important than ever for us to rally support behind funding our local journalism. You can help by participating in our "I Support" program, allowing us to keep offering readers access to our incisive coverage of local news, food and culture with no paywalls.
Make a one-time donation today for as little as $1.