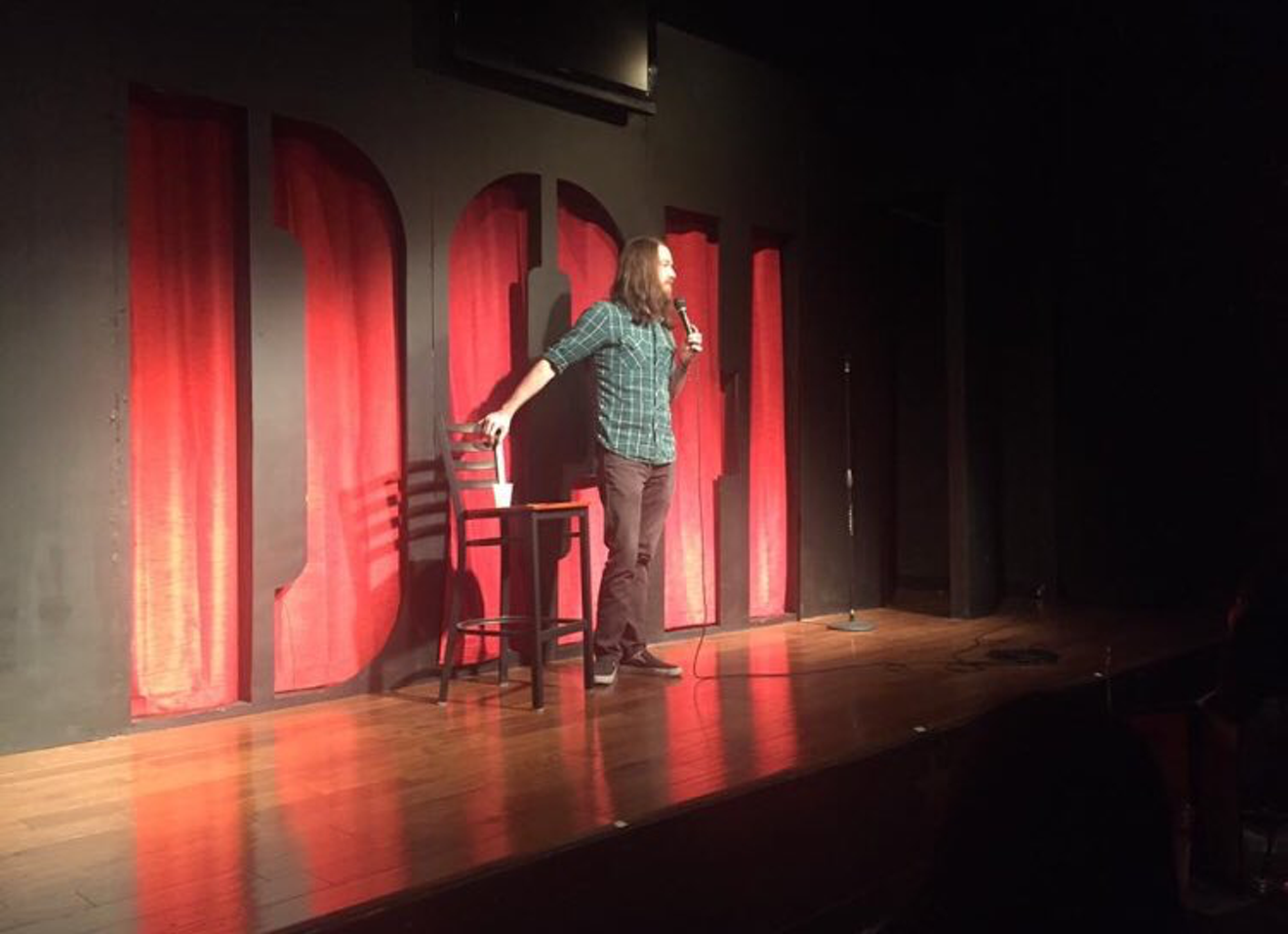 Scott Crisp never mentions abortion in his set. But one audience member was convinced he was pro-abortion. courtesy Scott Crisp
A bad day at work is never fun. At a typical 9-to-5, a bad day could involve being forced to stay late, getting into a fight with a co-worker or visiting to HR after they looked at your browser history. For a stand-up comedian, a bad day at work is as unpredictable as the next show, but it always makes for a good story. A few of Dallas’ best stand-up comedians share their worst experiences onstage.

Linda Stogner dances on a card table.
"It was my second gig ever — obviously, I was very green. We were performing at a private show at a barbecue picnic. The audience was under an awning. I was to go up first, and right before the guy running it introduced me, he whispered to me, 'We don't have a stage. Just stand on this card table.' I was so new, I didn't know what to do, so I just, extremely ungracefully, climbed up on the card table.

"I am very active in my act, and the card table was really wobbly. Every few minutes, everyone would gasp, afraid I was about to fall. I got off as soon as I got the light. The next comic just said no to the card table and stood in front of it. I was so mad. I didn't know I could say no. None of the other comics stood on the card table except me. As she was leaving, a lady told her friend, 'Good show, but why did that first girl stand on the card table?'"

Lawrence Rosales gets heckled by a Kid Rock fan.
"A guy sitting front row at a bar show started playing Kid Rock on his phone. He'd already heckled a couple of times, but it was mostly a good set, and I was at my closer.

"I look at the guy and say, 'I want to be mad at you, but honestly, thanks for finding out about the show. I didn't know trailer parks got Wi-Fi.'

"The crowd enjoys it. He doesn't.

"I whisper into the mic, 'I wish you wouldn't.'

"He jumps onstage, rips the mic from me, misses his first punch, and we get separated by members of the audience.

"But he keeps yelling at me, 'You're making fun of veterans with PTSD,' but he's wearing an Aeropostale shirt and camo hat. How was I supposed to know?

"Then I notice a large service dog running around in front of the stage, barking at me, and his wife is yelling, 'Don't corner him, don't corner him,' at the audience members who at this point are fill-in security for a door guy smoking a vape out back. I felt bad, but the lights are really in your eyes onstage.

"I didn't see the dog. I probably wouldn't make fun of a person with a service dog. 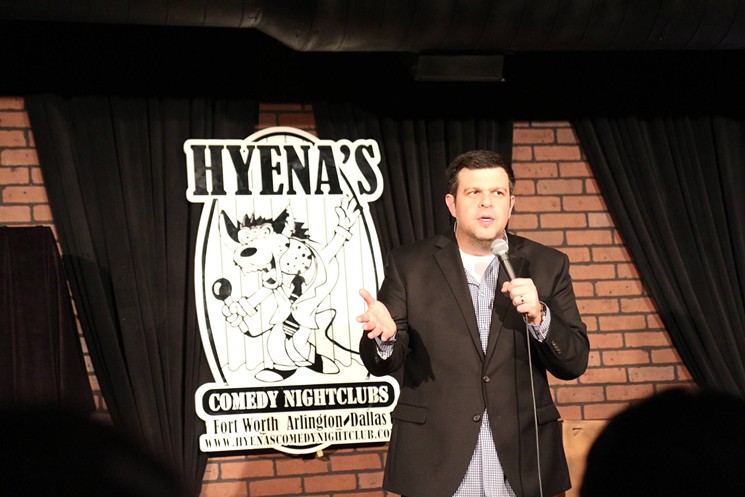 "Well, thank God for shock. They could have said something and ruined the show."
Cristina Nicolae

Aaron Aryanpur doesn't amuse shocked kids.
"Paul [Varghese] and I were performing at a college in a large cafeteria. Near the end of Paul’s set, this small group of dazed teens comes in and sits in the back booth, one over from me.

"'Yo. Where’ve you guys been? Show’s almost over,' Paul says from the stage.

"Mumble mumble. They were a distraction but weren’t trying to be.

"The show had been going well.

"Paul pushes. A few jokes, they haven’t smiled. They say they don’t want to talk about it. They leave, but not before one of them comes over to me and whispers, 'Sorry. We just saw a kid get hit by a car. He was on his bike. We just spoke with the police. Tell you friend we’re sorry for interrupting ... .'

"Paul had moved on with his set, doing great with the crowd, who had also moved on.

"I was stunned. I felt terrible for the kid, his family, those witness kids, everyone. I think that was the day I realized I was a real comedian because my next dumb sicko thought was, 'Well, thank God for shock. They could have said something and ruined the show.'"

Monna offends someone who doesn't speak English.
"Once I was faltering for time, so I tried to do crowd work with this woman in the front and was getting mad at her for looking right at me but not responding. And it was just as I was about to call her something rude, the guy next to her yelled out to me, 'She doesn't speak English.'

"So I was going to apologize but realized how little Spanish I actually learned in college and instead just said, 'Lo siento,' and moved on. That wasn't big on dignity."


"Surreal feeling getting off the stage and thinking to yourself, 'Man, I did not earn that spinach-artichoke dip tonight.'" — Wes Corwin


Wes Corwin bombs at Applebee's.
"Back when I was based in Austin, there was an open mic at an Applebee's at 11 p.m. where the comics that came out got a free appetizer. I was the third comic up — I'd been doing it about three months and I just ate it. For six minutes, the saddest radio silence. The mic had 10-minute sets, but after that six, the host stood up, got between me and the mic and told me to get offstage and that he was doing me a favor.

"Surreal feeling getting off the stage and thinking to yourself, 'Man, I did not earn that spinach-artichoke dip tonight.'"

Scott Crisp angers someone for being pro-abortion — without ever mentioning abortion.
"I was opening at a club in Fort Worth a couple years ago, and when I came off from my set and introducing the feature, a heavy-ish man in his mid-60s was standing toward where I was sitting in the back of the room. I had had a fine set, or at least good enough that I wasn’t expecting anyone to leave their seat and miss part of the show just to chastise me over it — but here was this guy, waiting for me.

"I leaned down so I could hear what I was still assuming would be kudos.

"Now, keep in mind, I have never so much as said the word 'abortion' in my set. I mean, I get having to defend my jokes from charges of being poorly thought out, bad, stupid, too far of a walk for too little payoff and so forth, but I can say with confidence: About abortion, they are not. I stared at the guy in disbelief for a couple minutes as he continued explaining how my outspokenly pro-abortion portion of the show affected him, until a club manager arrived and told him nicely to leave me alone and shut up and go back to his seat, which brought to a close the single weirdest interaction of my comedy life to date.

"Offended Man wasn’t done, though. He kept shouting stuff until he was kicked out midway through the headliner’s set and then form tackled in the lobby after threatening to break a staff member’s arm. So, pretty chill night of comedy."