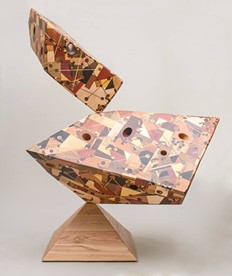 Jeff Robinson’s artistic tools of choice are thousands of pieces of hardwoods from North and South America. He takes pieces of varying shapes and sizes and commingles them, resulting in sculptures that will remind you of high school geometry class. Along with sharp angles, the pieces create the illusion that the large-scale sculptures are balancing precipitously on edges. Following its opening, the exhibition will run through April 13.

Art Students: They’re Just Like Us. At least, the ones attending the Studio Art program at UNT’s College of Visual Arts and Design are. The group statement for their upcoming exhibition Formestic reads like a chronological life summary not too dissimilar from yours or mine: “We made friends and had a crush and had our hearts broken. We went to high school. We went to college. People we loved passed away. We flew in airplanes. We watched television. As much as we may have wanted to, we didn’t give up.” While searching for a title for their show, they struggled to find a sufficient word to speak to the non-divisiveness they wanted the exhibit to encompass. So they made up their own word: Formestic. The show features art across a range of disciplines — drawing and painting, ceramics, fibers, metals and jewelry, photography, new media and sculpture. “We are in debt,” they say. “But we are hopeful.” Admission is free.

Alicia Eggert’s large-scale neon installations say a lot with a little. Her pieces are succinct, almost terse. The interdisciplinary artist’s vibrant works tend to pop up in unpredictable places: The storefront of a quaint bed and breakfast, with the letters “N”, “O” and “W” spread across three upstairs windows. On a seaside cape in Maine is  “Forever,” a 15-foot-tall steel scaffolding structure visible from Lubec, Maine, which is the easternmost town in the contiguous United States. Because, as they say, on a clear day you can see forever. Eggert’s point is that not all days are clear.

For Partial Visibility, Eggert considers time and language her sculptural modus operandi. Here, she tries to reconcile opposing concepts of time — and the finite nature of life — within the context of a (most likely) infinite universe. The exhibition’s title suggests the presence of something we can’t quite see or understand and probably never will.

Speaking of terse, let’s talk about Anita Kunz’s Paintings. In this installation, Kunz addresses the hierarchy of human interaction and how we relate to creatures of the non-human sort, while portraying strong female protagonists in both traditional and fantasy-like settings. This is stuff you want to look at for a while. Take, for example, "Totem," a somber-hued watercolor in which a naked-as-a-jaybird woman is riding a horse in the reverse position. On top of her, facing the opposite direction, is a cat. On top of the cat, facing (you guessed it) the opposite way is a rooster. Just what does this all mean? You’ll have to decide for yourself. The show is set to run through April 15.

In conjunction with his ongoing exhibition of mixed media works, Dallas-based artist Robert Barsamian (who usually goes by his last name only) will be in house at Conduit Gallery to sign copies of his recent book, In the Zone. Known for his allegorical, and frankly, bizarre, visual representations of global political strife, the first generation Armenian-American artist uses symbolic imagery, pattern and visual fragments to lay out depictions of historical conflicts (the Trail of Tears, to name one). Admission is free.