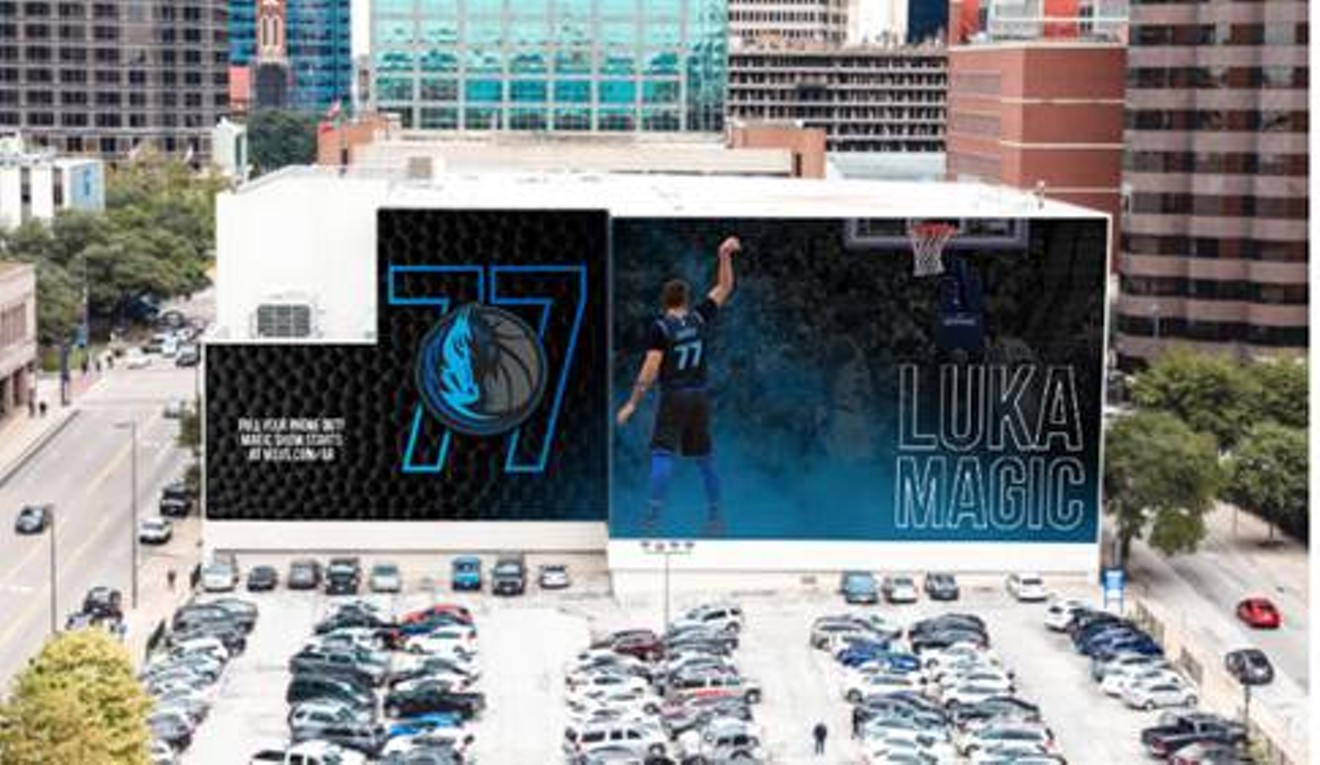 Across the back of the T. Boone Pickens YMCA on 601 N. Akard St. sprawls the new 68-by-193-foot mural. Not settling for a standard mural, the Mavericks presented a modern magic show for fans to enjoy. A basketball smashes into the wall, cratering the point of impact as Doncic’s form projects outward, towering over cars and pedestrians before washing into footage of him sinking his trademark shot.

The AR mural is brought to life with a few small clicks on your phone. By clicking here you will be taken to a small set of instructions directing you to click a Facebook link, point the screen toward the mural, and watch the scene unfold. Participants are then invited to post their best take on the stepback shot, and the winner will receive a signed Doncic jersey and a chance to meet the rookie.

“The Mavs are so proud to be able to give the fans an innovative and cutting-edge experience using augmented reality to bring Luka magic to life in the heart of downtown Dallas,” Mavericks CMO Jerome Elenez said in a statement. “We strive to interact with MFFLs both on and off the court and are excited to see our fans’ best Luka impersonations as part of the challenge. Go Mavs!”

The opening of the season saw the mural featuring guard Dennis Smith Jr., but his trade to the Knicks for Kristaps Porzingis left an opening for a new face to take center stage bearing the Mavericks jersey. Doncic was an easy choice. His breakout first season has made the versatile 6-foot-7 player a favorite to have his name etched on the NBA Rookie of the Year award.


Doncic was an easy choice. His breakout first season has made the versatile 6-foot-7 player a favorite to have his name etched on the NBA Rookie of the Year award.

The augmented reality mural is a product of the collaboration between the Dallas Mavericks and Groove Jones, a Dallas creative technology company widely recognized for their work in using virtual reality to promote brands. It was the pairing of the Mavericks’ footage and Groove Jones’ digital methods that created the first mural of Smith Jr. dunking a ball before seemingly landing in the adjoined parking lot.

“It was great to collaborate with Jerome and his team on this new installation," says Dale Carman, partner at Groove Jones. "The Mavs are great partners. They think creatively, and we love that they embrace innovative thinking.”

With any luck, Doncic will have a long residency in Dallas, unlike the mural. The AR wall-scape will be active through March 15, with no determination for future displays.
KEEP THE DALLAS OBSERVER FREE... Since we started the Dallas Observer, it has been defined as the free, independent voice of Dallas, and we'd like to keep it that way. With local media under siege, it's more important than ever for us to rally support behind funding our local journalism. You can help by participating in our "I Support" program, allowing us to keep offering readers access to our incisive coverage of local news, food and culture with no paywalls.
Make a one-time donation today for as little as $1.