Dan Black paints one of the 42 works that are part of Denton's Mural Art Project. Narciso Tovar
Ten years of business, seven years of painting and around 42 murals painted and repainted by 35 artists — all at one burger joint in downtown Denton.

You can now relax on the balcony and nibble on LSA’s garlic Parmesan French fries while gazing over the rooftops of the city square and at the six gorgeous paintings on the second-floor patio, thanks to a partnership between LSA Burger Co. and the Greater Denton Arts Council (GDAC) for the Mural Art Project.

In 2011, John “Sparky” Pearson wanted to settle back in the Denton area after some years spent flying across the country for a big-city job. He was having lunch with an old colleague, Steve Watkins, at what used to be the Denton County Independent Hamburger Co. on the downtown square when he learned the place would be closing.

Pearson turned to Watkins and said, “Let’s buy the place.”

By 2012, the paperwork was signed, making Pearson and Watkins the new owners of the burger joint. The scope of their grand vision was simply to keep the doors open and extend the hours to preserve a place they loved and give people more time to enjoy it.

But they soon learned they would not be granted a certificate of occupancy unless they radically updated the restaurant. The city had long been chasing after the previous owners to bring the building up to code.

After lengthy battles with the city, Pearson says, he was tasked with re-creating the restaurant’s vision. He wanted LSA to do more for the community than serve burgers. He decided to make it a haven for the arts, embracing his lifelong love for all things artistic. That’s when he noticed how blank the walls were on the restaurant’s second floor.

The result is a rotating mural project. Below is a look at some the project's artists.
click to enlarge 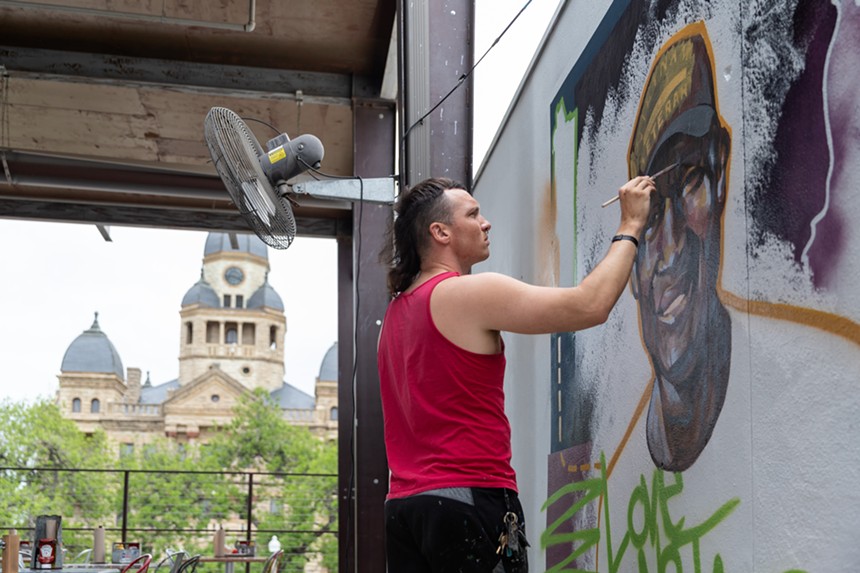 Dan Black made sure that the mural project would be revolving so the works changed every year.
Narciso Tovar

Dan Black
Dan Black sits at one of LSA’s second-floor tables by a window. He's dressed in a paint-smudged tank top and a ball cap that's holding down a shaggy haircut — halfway between a mullet and a mohawk. With his septum piercing and patchwork of tattoos up his arms, Black’s punk aesthetic might seem at odds with his soft-spoken, thoughtful manner, but the best artists are often contradictory.

Black has painted several murals in Denton, growing his following with each one. When he was first approached by Pearson and Narciso Tovar, the Radical Hospitality Group’s marketing and public relations partner for LSA and other Texas restaurants, they wanted him to paint the entirety of the second floor’s walls. But to Black, the steel dividers breaking the walls into six even sections begged for more artists.

“Dan was an integral part of making decisions from an artist’s perspective,” Pearson says. “That’s what I love about artists: to see what they can see.”

Black was at first shocked at Pearson and Tovar’s hands-off approach. Unlike with most commissions, these clients wanted him to paint whatever he wanted. According to Tovar, the only requirements were an honest passion for the work and positive energy.

Black always wanted to see some type of festival or public celebration of street art.

“I was like, ‘I think it’d be really cool if it was like a cyclical thing,’” Black says of that first conversation. “I kind of pitched him the idea of doing it every year and having rotating murals and having new artists, and it felt like a great way to create reoccurring work, you know, for local artists. But it also gave customers incentive to come back and visit year after year to see the new murals.”

For Black, it was a win-win for both the restaurant and the artists.

Impermanence and inevitable destruction are inherent to Black’s work as a street artist, so the idea of painting over his mural in a year was part of what made it special. But to ask those paying for his work and those enjoying the pieces to be OK with erasing the murals within a year was something else entirely.

“I think people have different ideas about what makes something valuable, you know, and I think if something has to be permanent to be valuable, it’s going to be hard to find anything that’s valuable,” Black says, “because the nature of most things is that they’re not permanent.”

The sentiment of "love and let go" are foundational to his street art.

“I think early on, for me, I had to get used to, like, I’m going to put X number of hours into painting this thing,” he continues, “and it’s going to be painted over in a week, and to be OK with that, to just be satisfied with memorializing it with a photo and then knowing it’s going to go away.”

If other artists on the project were hesitant about the fleeting lifespan of their murals, it hasn’t stopped them from applying year after year.

Black has one core, unwavering principle: He believes that good artists' work comes from a place of respect. That’s what inspired this year’s mural. He painted lifelong Denton resident and activist Willie Hudspeth, who is known for his 21-year fight to remove a Confederate monument from Denton County Courthouse grounds and for his work to preserve the St. John’s Freedman’s Cemetery.

Black was awed by Hudspeth’s tenacious commitment to the causes he champions and his unflinching attitude in the face of counter-protesters.

“That’s what so was admirable to me about him, is this idea of unrelenting ... he’s not afraid of conflict and the causes that he believes to be important and that need to be advocated for,” Black says. “But also, he sees the value even in his opponent enough to just give them basic human respect and dignity.”

The mural depicts Hudspeth staring straight on at the viewer with a smile, his silhouette lightly outlined by a golden yellow halo almost matching the “Vietnam War Veteran” lettering on his hat. Hudspeth is surrounded in a smokey blend of black and violet with streaks of lime-green spray paint. The words “Love Not Hate” are written below in a style reminiscent of traditional graffiti tagging. It’s chaotic and joyful; it’s dark but has moments of brightness, much like Hudspeth’s work.
click to enlarge Ashley Villers
Ahley Villers designed her mural with interaction in mind; the line work and incomplete colors are a nod to her self-published adult coloring book.

“I want people to look it and think, ‘Why does it look that way? I want to finish it,’” she says.

Villers is most known for her portraits and fandom work. She’s been licensed by major entertainment brands to do work inspired by Stranger Things, Star Wars, Marvel and The Walking Dead. Before she started developing her own brand, Villers taught middle school art classes for 10 years in Ohio until her husband’s job moved them to Denton. Villers picked up work as a substitute teacher but saw the move as an opportunity to take her personal artwork from a hobby to a full-time gig.

She’d already developed her animal and fantasy-themed coloring book and pressed on with that challenge for the mural. To celebrate the North Texas landscape, Villers painted a coyote perched on a boulder devoid of color, against a vivid desert sunset. Cactuses dot the scene in varying degrees of coloring but with consistently delicate line work. For Villers, the coyote is symbolic of adaptability and the color scheme is a loose commentary on environmental conservation.

Painting with the dinner-rush audience was an unexpected perk for the artist, who says she’s accustomed to working in front of others from her teaching days. Chatting with curious patrons even earned her another commission.

“I’m making art to connect with people,” Villers says. “I never want to come off as phony.”

Despite working on “sheer adrenaline and panic” over the course of 24 hours, she says the piece “came out as good, if not better than expected.

“I was working outside of what I knew my abilities were,” she adds.

Villers’ accomplishments are a testament to her adaptability, just like her coyote. One of these days, she hopes to put out a second edition of her coloring book, and maybe buyers will see a familiar snout inside. Amber Hart's work is meant to honor those pets who were adopted and then abandoned in the pandemic.
Narciso Tovar
Amber Hart
Artists use the cliche that they put blood, sweat and tears into their work, but what about second-degree sunburn? That was the physical toll of Amber Hart’s mural on the side of the Greater Denton Arts Council (GDAC) building, where until recently she was also an intern.

Her approach was to express simple ideas in complex ways. The placement of her mural meant that most viewers would most likely be whizzing past in their cars or pausing briefly at a red light, and have a significantly different experience with her work than those viewing the LSA murals.

On a field of green stripes like a well-manicured lawn, two red plastic bulldogs stand in profile, facing down over a small vase of wilting plastic flowers. The simplicity and cleanliness of the composition make it a quick study at first glance. But the subtle details, like the realism of the plastic textures and the cartoonish accent lines of alarm over the flower’s snapped stem, painted in a flatter style compared to the dogs, all make you stop to consider what story Hart’s telling.

She had been thinking about the number of people on Facebook showing off their pandemic puppies, only to turn around and send them back to the shelters or other homes once COVID restrictions lifted.

This is the kind of discourse Hart wants her work to inspire. She “takes the history of American culture and then put[s] it into the present ‘non-realistic world.’” Her plastic subjects and rejection of traditional realism are meant to tease stereotypes and other such preconceived notions. She likes to play with “the past and present lifestyle of the American suburbia.”

When describing the inspiration behind her mural, Hart says, “I kind of hate this, but it goes back to the pandemic. I hate being cliché like that.”

“I have to remind myself that I had a year and a half stolen,” Hart says, “and that even though I’ve come so far, I always think but for a year and a half, I wasn’t able to do anything.”
KEEP THE DALLAS OBSERVER FREE... Since we started the Dallas Observer, it has been defined as the free, independent voice of Dallas, and we'd like to keep it that way. With local media under siege, it's more important than ever for us to rally support behind funding our local journalism. You can help by participating in our "I Support" program, allowing us to keep offering readers access to our incisive coverage of local news, food and culture with no paywalls.
Make a one-time donation today for as little as $1.