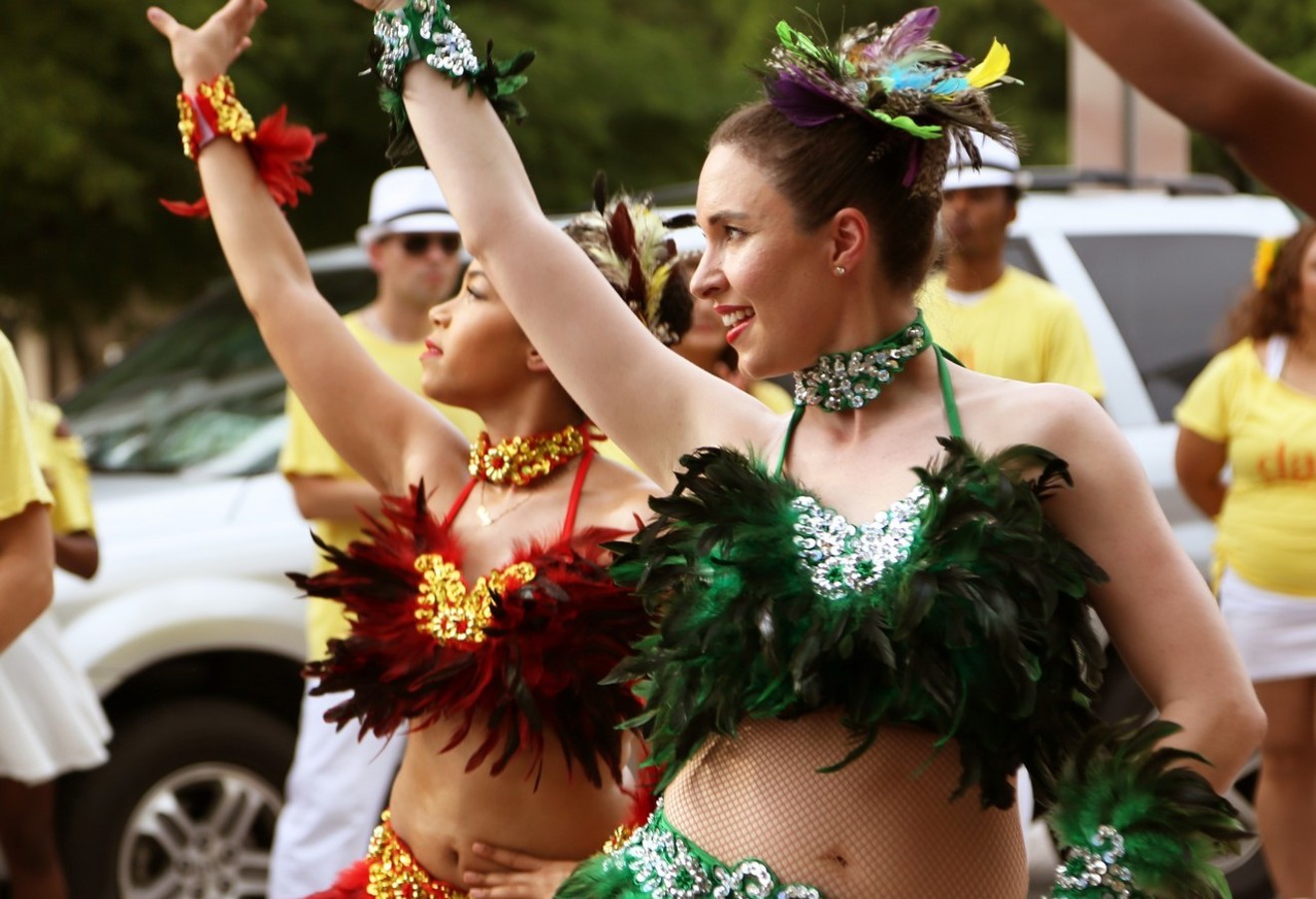 The Dallas Symphony Orchestra is once again teaming up with conductor Jeff Tyzik to bring epic cinema scores to life. Expect the grandiose and the moving as the orchestra explores the most enduring works of Korngold, John Williams, John Barry, Mancini and more. Classics such as Indiana Jones, Pink Panther, The Bridge on the River Kwai and E.T. all make the program. Performances are at 7:30 p.m. Friday and Saturday, and at 2:30 p.m. Sunday at the Meyerson Symphony Center, 2301 Flora St. Tickets start at $37. Visit mydso.com for more information. Jonathan Patrick

Much of what you love about KTCK-AM 1310 and 96.7 FM The Ticket’s annual Summer Bash — buffoonery, beer, bikinis, volleyball and the Timewasters — is the same, but this year’s version gives you a reason to check out the largest beachfront in North Texas from noon to 9 p.m. Friday. Roundtables, in which Ticket show hosts mix it up in varying configurations for some Algonquin-worthy discussions, begin at 6 p.m. You can hear those on the broadcast till 8, but as always, you’ll have to be there to hear the Timewasters when they take the stage about 8:15. The Timewasters, of course, is the name given to the ever-shifting lineup of show hosts, on-air personalities and guest players performing covers, parodies and original songs that might be funny even to those not in on the densely layered in-jokes. Admission is free, and parking is $10 per car at Little Elm Park, 701 W. Eldorado Parkway. Volleyball sign-in is at 11 a.m. and costs $20 per four-person coed team. Visit theticket.com for more information. Jesse Hughey

It's National Pride Month, and if that's not an excuse to go outside and party with a bunch of strangers, we're not sure what is. At 6 p.m. Friday, the Dallas Arts District will close its streets for its annual Summer Block Party celebrating the arts and culture of the LGBTQ community. Expect live concerts from Dezi 5, This Will Destroy You and more, plus face painting and more family-friendly fun. It's free and lasts until midnight. Paige Skinner

Few artists make it out the other side of child stardom. Experiencing the pressures of fame at such a young age has a way of unraveling even the best of talents. After bursting onto the country music scene in 1972 with top 10 single “Delta Dawn,” Tanya Tucker found fame and fortune at just 16 years of age. As with many before and since, Tucker’s early rise soon gave birth to those demons we typically associate with celebrity struggle: toxic relationships, youthful recklessness, chemical dependance. But unlike most, she persevered and is, at 58, a wiser, more emotive artist because of it. Glowing with spiritual aching and bittersweet empathy, Tucker’s pop-inflected tunes marry her larger-than-life legacy to intimate song writing. Loneliness and the toll of addiction are themes felt more than referenced in Tucker’s music, but the weight of such heavy experiences has given her music an inspirational and painterly beauty. To catch a Tucker performance is to witness a classic section of country music’s varied history and to see determination and artistic endurance personified. 10:30 p.m. Friday, June 15, Billy Bob's Texas, 2520 Rodeo Plaza, 817-624-7117, billybobstexas.com, $16/$30. Jonathan Patrick

Because running 5 kilometers across a cement and asphalt griddle in Dallas in mid-June isn't appealing enough, the organizers the Fair Park Urban Dash decided to up the fun quotient by adding 13 obstacles to the course through Fair Park. Run over pallets, under barriers and through fountains — or if you're smart, run halfway through the fountains, then lie down for a nap in this mudless obstacle course. Register online for $60 at fairparkurbandash.org or show up at 7 a.m. Saturday at Parry and Exposition avenues prepared to sweat out your Friday night intoxicants. Patrick Williams

You can’t call yourself Texan if you haven’t been to a rodeo. You’ll get your chance to witness this mighty moment of Texas entertainment at the 30th Annual Texas Black Invitational Rodeo starting at 7 p.m. Saturday at the State Fair Coliseum in Fair Park, 1300 Robert B. Cullum Blvd. African-American cowboys and cowgirls will dazzle the crowd with their impressive display of rodeo skills. The event kicks off the night before with the annual rodeo hoedown at the African American Museum, 3536 Grand Ave. Tickets for the party are $10. Tickets for the rodeo, $10 for reserved seats and $35 for box seats, can be purchased at the African American Museum or at aamdallas.org. Danny Gallagher

Whether you’re still perfecting that downward dog or you’ve fully mastered the lotus pose, you’ve got a reason to celebrate yoga. The Eastern stretch-and-relaxation practice has been good for minds and bodies the world over, not to mention the oomph it has lent to the athleisure and fitness industries. Sing its praises while you meditate, play, shop and learn at this year’s Dallas Yoga Fest, from 8 a.m. until 6 p.m. Saturday at Southfork Ranch, 3700 Hogge Ranch in Parker. Roll out your mat for mediation, mindful breathing and stress relief; attend workshops on health and wellness; and catch a spiritual and inspiring keynote from Swami Mukundananda. Admission is free; register at dallasyogafest.org. Jennifer Davis-Lamm

Given the state of our political and cultural climate these days, one can't help but pause at a name like Birthright BBQ Fest. Don't worry, though, this has nothing to with immigration or men in white, pointy hats. Barbecue is every Texan’s birthright, the organizers mean, and to prove it, they've brought in some of the state's most talented pitmasters for this Father's Day bash at Dallas Heritage Village, 1515 S. Harwood St. Headlining the event are Todd David of Cattleack Barbecue in Dallas and Aaron Franklin of Franklin BBQ in Austin. There'll be all kinds of barbecue available, but the star of the show will be a 44 Farms half-steer cooked over an open pit, the way the first Texans did it. The smoke rises from 6 p.m. until dark. Tickets are $65 in advance and $75 at the door. Find them at birthrightbbqfest.com. Patrick Williams

Scottish indie-pop group Belle and Sebastian will stop in Dallas for the first time since 2015. Its return comes at a particularly fortunate time in the band’s history. The conclusion to the group’s three-part EP, How to Solve Our Human Problems, dropped in February, and the band is planning fan cruise and festival for the end of summer 2019. The Boaty Weekender, named in honor of the 20th anniversary of Belle and Sebastian’s Bowlie Weekender Festival, will be a four-day cruise from Spain to Sardinia and back, complete with themed balls, yoga classes and the first live performance of the band’s 2000 album, Fold Your Hands Child, You Walk Like a Peasant. While perhaps considered a little more obscure on this side of the pond, Belle and Sebastian’s latest offerings have been more than well received. And with fan favorites like “The Boy with the Arab Strap” and “Piazza, New York Catcher,” Belle and Sebastian’s latest resurgence is the perfect chance to catch the group live. 8 p.m. Sunday, June 17, Bomb Factory, 2713 Canton St., 214-932-6501, $40.50. Nicholas Bostick
KEEP THE DALLAS OBSERVER FREE... Since we started the Dallas Observer, it has been defined as the free, independent voice of Dallas, and we'd like to keep it that way. With local media under siege, it's more important than ever for us to rally support behind funding our local journalism. You can help by participating in our "I Support" program, allowing us to keep offering readers access to our incisive coverage of local news, food and culture with no paywalls.
Make a one-time donation today for as little as $1.