The space recalls a nightclub from the '20s.  A bar in the back serves drinks until the show starts, when it’s shrouded by a large black curtain. Plush sofas, interspersed with ornate tables, line the walls leading to the stage.

courtesy Four Day Weekend
Audience members are instructed to fill out one-word suggestions on the backs of yellow Post-it notes and stick them on a marked board. They can write random sentences on index cards and place them in a bucket. A flashing reminder to make the suggestions clean appears on a lowered screen.

After a preshow video, the stage lights blast on and David Wilk, one of the founding members of Four Day Weekend, enters the stage with unrelenting energy. Wilk is a masterful host, both entertaining and controlling the crowd without becoming unnerved by the unexpected. He is remarkably sharp-witted as he consistently weaves fluidly from one joke to the next. Wilk serves as the guide to the night's performance, dutifully explaining the rules of an improv show for the uninitiated while introducing and performing in the various segments. 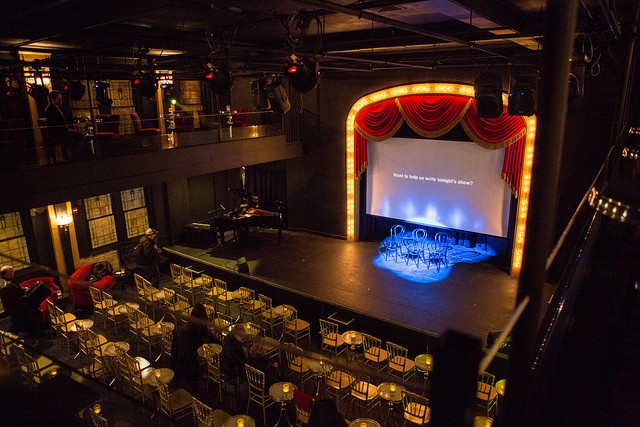 courtesy Four Day Weekend
The cast members, both veterans from the Fort Worth location and talented newcomers, complement one another with their different approaches as they break into song, create fully fleshed-out scenes from a one-word suggestion or interact with the audience.

Oliver Tull provided multiple highlights of the night with his hilarious character work and an uncanny ability to create full songs from briefly worded suggestions. There’s a natural charm to Tull’s stage presence that makes his skills born from many years of hard work look easy.

The fact that the show is so well-rounded and funny should come as no surprise. While Four Day Weekend isn't a household name in Dallas, the troupe has been raising the bar for improvisational comedy over the last 20 years in Fort Worth. The troupe has performed internationally, written a bestselling book titled Happy Accidents: The Transformative Power of Yes, and in Business and in Life, and performed for two former presidents.

While Four Day Weekend may not be a household name in Dallas, the troupe has been raising the bar for improvisational comedy over the last 20 years in Fort Worth.


Wilk admitted there was some initial hesitance to opening a Dallas location.

“We knew the blood, sweat and tears it took to get the Sundance Square theater up to selling out four shows a week," he says. "Opening a second space would have to be a perfect scenario.”

The perfect scenario presented itself in the form of Jason Boso, owner of the Truck Yard and Twisted Root and a former student of Wilk’s. Boso purchased a new location on Greenville and suggested the space might be perfect for Four Day Weekend.

This weekend is Four Day Weekend East's third on Lower Greenville. Shows are at 9 p.m. Fridays and Saturdays, and tickets are $25.