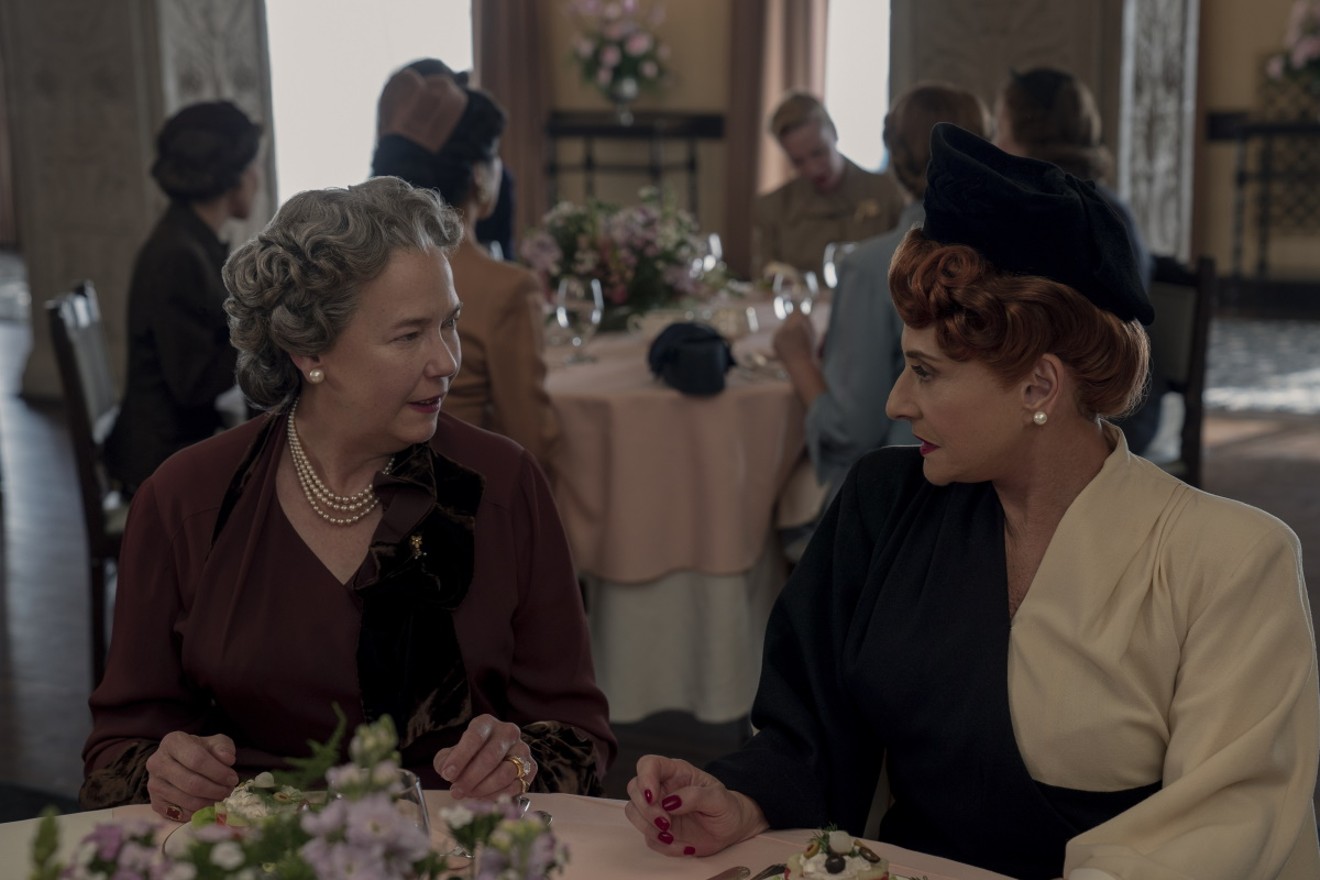 Harriet Sansom Harris as Eleanor Roosevelt (left) and Patti LuPone as Avis Amberg in Hollywood. Saeed Adyani/Netflix
Ryan Murphy’s new Netflix series Hollywood creates an alternative post-World War II Hollywood and highlights the unfair systems afflicting people of different races, genders and sexualities. Many of those systems are still in place today, but Murphy imagines what Hollywood may have looked like had they been broken apart.

Part of Hollywood's plot concerns an aspiring screenwriter named Archie Coleman (Jeremy Pope) who writes a screenplay inspired by the true story of Peg Entwistle, a young woman who killed herself by jumping off the H of the Hollywood sign. Coleman later decides to rewrite the story, making it about a young black woman named Meg, and he changes the ending to be happier. Although studio head Avis Amberg (Patti LuPone) at first refuses to let Coleman change the screenplay, she is persuaded by Eleanor Roosevelt (Harriet Sansom Harris) to do so.

Harris appears only in the fourth episode of the limited series, but she is key in the shift of the series’ plot.

The Fort Worth native first played Eleanor Roosevelt on Broadway in a Paul Rudnick play called Rude Entertainment. Because its opening date coincided with 9/11, the satirical play had a short life.

“Because it was a satire, I wanted to read a lot about her,” Harris says. “Even though we were doing something different, I wanted to have the foundations of what she stood for or why these things would be funny if Eleanor Roosevelt were behaving this way.”

Harris says she thinks of Eleanor Roosevelt frequently. She admires her outspokenness and how she stood for equality.

“I wish we had somebody who was so unafraid to speak her mind right now." – Harriet Sansom Harris

In the past, Harris had auditioned for Murphy for a role on Nip/Tuck. She didn’t get the role and wouldn’t work with Murphy again until 2018, when she appeared on an episode of American Horror Story: Apocalypse. Later, Murphy approached her to play Roosevelt.

“I found that flattering because she’s such an incredible woman,” Harris says. “I didn’t think anything I had to offer would be anything like Eleanor. But you know, I guess that’s where acting comes in.”

Harris attended Arlington Heights High School and Fort Worth Country Day School. Her mother was an art teacher who encouraged her act beginning at a young age. Harris says acting was a way out of herself.

Harris praises DFW for its museums and art instruction in schools, but says there are not enough art programs in schools across the nation.

“Fort Worth was a small enough town for me to figure out what I wanted to do,” Harris says. “And it turned out that what I could do took me out of Fort Worth. It didn’t necessarily have to, but it just ended up being that way.”

When she’s away from Texas, Harris says she misses the sounds of the city. Since Fort Worth is relatively flat, she could always get a beautiful view of the sky. She misses the natural parts of Texas, and she has pleasant memories of sitting on trails with dinosaur footprints as a child.

“Of course, I miss the people, too,” Harris says, “but that can be remedied by a visit.”

Hollywood won't be the last time Harris plays Roosevelt. She is also set to play her in a new series called Atlantic Crossing, which is scheduled to premiere later this year. She assures fans that she will never turn down an opportunity to play Roosevelt.

“I wish we had somebody who was so unafraid to speak her mind right now,” Harris says “She had a way of speaking to power and privilege, and she had the command and respect of so many people.”

Harris will also have a role in Ratched, a Netflix series inspired by Ken Kesey’s One Flew Over the Cuckoo’s Nest. Like Hollywood, Ratched was also produced by Ryan Murphy.

“He’s such a wonderful writer,” Harris says of Murphy. “The stories are always compelling and they’re always excellently cast. I think he just figures out what certain actors can do and what their range is and then he likes to test the limits of it.”
KEEP THE DALLAS OBSERVER FREE... Since we started the Dallas Observer, it has been defined as the free, independent voice of Dallas, and we'd like to keep it that way. With local media under siege, it's more important than ever for us to rally support behind funding our local journalism. You can help by participating in our "I Support" program, allowing us to keep offering readers access to our incisive coverage of local news, food and culture with no paywalls.
Make a one-time donation today for as little as $1.